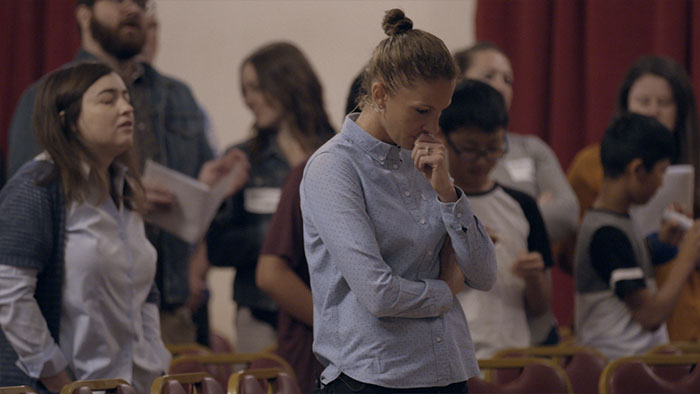 
“Beware of false prophets, who come to you in sheep’s clothing but inwardly are ravenous wolves. You will know them by their fruits. Are grapes gathered from thorns, or figs from thistles?  In the same way, every good tree bears good fruit, but the bad tree bears bad fruit. 18 A good tree cannot bear bad fruit, nor can a bad tree bear good fruit. Every tree that does not bear good fruit is cut down and thrown into the fire. Thus you will know them by their fruits.


And a second is like it: ‘You shall love your neighbor as yourself.’

Throughout history unspeakable crimes have been committed by those claiming to follow a God of love. The medieval church tortured suspected heretics on the grounds that it was better to inflict temporary pain on the body of a heretic and save the soul from the eternal fires of hell. Former Evangelical spokesperson Julie Rodgers, featured in Pray Away, has written, “I’ve come to believe that religion and spirituality have the power to harm and to heal.” Her one time Evangelical peers, claiming to love homosexuals, devised the modern torture of conversion therapy in order to save the latter’s souls.

For those still not familiar with the term, Kristine Stolakis’ documentary film begins with a title card explaining:

“Reparative or ‘conversion’ therapy is the attempt to change a person’s sexual orientation or gender by a religious leader, licensed counselor, or in peer support groups. All major medical and mental health associations have denounced the practice as harmful.”

The film opens upon Jeffrey McCall, a young man who stands outside a grocery store asking customers, “Do y’all need any prayer?” He tells anyone who will listen of his lurid homosexual past and how he was enabled to pray away his affliction.

We will see Jeffrey again at the end of the picture, but in between we will be treated to a brief history of the rise of conversion therapy and the stories of four gays who once were prominent leaders in the movement until after years had passed and they still had same sex feelings. They realized they had been living a lie, a lie that was inflicting harm on a great many people. (There is a grim end note in which we are informed that a survey found that that LGBTQ youth who experienced conversion therapy were more than twice as likely to attempt suicide.)

Through interviews and archival footage the filmmakers provide the context of conversion therapy, beginning with the rise of the Evangelical Movement in the early 1980s. We see leaders such as James Dobson and Jerry Falwell preaching a gay-denouncing gospel via their TV programs, fueling the new “Moral Majority.” When

AIDS broke out, at first confined to the LGBTQ community, these leaders pronounced it as God’s judgment on an immoral segment of America. From countless pulpits war was waged against gays, and in California Evangelicals joined with Catholics and Mormons to pass Proposition 8, banning same sex marriage.

John Paulk and his wife Ann, supposedly cured of their homosexuality in the 90s were frequent guests on talk shows and written up in such magazines as Time, Newsweek, People, GQ. For five years Paul served as chairman of the board of Exodus International North America, a large umbrella organization promoting conversion therapy. After a photographer caught him  leaving a gay bar in Washington, D.C., in 2000, John admitted he was still gay and denounced gay conversion therapy. His wife, now divorced from him, remains in the anti-gay movement, but John happily lives with his same sex partner, though deeply regretting the harm he has done others.

Randy Thomas, a former vice-president for the largest of the gay conversion organizations, Exodus, and Yvette Cantu Schneider, once a spokeswoman for the Family Research Council, also express their remorse over their being prominent in a movement so harmful to so many young LGBTQ people. But I was especially interested in Julie Rodgers as she prepared for her wedding because I am reading her powerful memoir Outlove: A Queer Christian Survival Story. (More on this later on my blog and/or in the next VP.)

Ms. Rodgers reports that her life as a lesbian supposedly transformed into a straight spokesperson for anti-gay groups led to her hating herself so much that she found relief by cutting her shoulders and arms. Emerging from this dark period, she has retained her faith in a loving God and found an accepting community at the Washington National Cathedral. The sequence of her wedding, in which she and her bride Amanda (though scars can be seen on Julie’s arms) exchange their vows before their friends, is a great way to climax this cinematic study of the aftermath following the dissolution of Exodus. Smaller groups, such as one led by Jeffrey McCall, still carry on conversion therapy, but as more states pass laws banning it, we can hope that it will never again become so prominent.

The film does not attempt to get into the theological-Biblical debate over homosexuality. (For this I would direct the reader to Jack Rogers concise Jesus, the Bible and Homosexuality, perhaps the best of the books that I have read that delve deeply into the proof texts Evangelicals base their views on.) Nor does the film attack Christianity itself. Instead, it tells the story of those who swallowed a perverse interpretation of Scripture, one that should have been evident because of the great sorrow and damage done to young lives—and, to our relief, all four main subjects have survived. This is a film that both adult and youth groups will benefit for watching and discussing. It is amazing how swiftly the majority of Americans have come to accept same sex marriage, but as the rise of hate groups during the past four years has shown, hatred of the LGBTQ community has not vanished, just gone underground, ready to erupt in rage at any time. The film can be a tonic for young viewers who are questioning their sexual identification, and who need to learn that God loves them regardless of their condition.

A documentary describing the afterlife since the demise of the anti-gay Exodus International, 5 of the 6 subjects now out of the closet and living enriched lives, one woman now married to a woman.
More Details