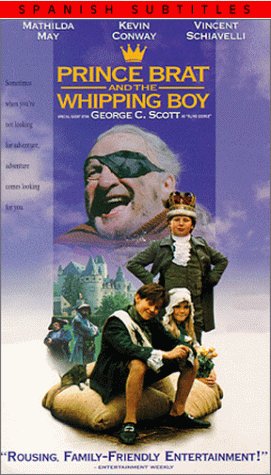 Those who are kind reward themselves, but the cruel do themselves harm.


Train up a child in the way he should go: and when he is old, he will not depart from it.


As God’s chosen ones, holy and beloved, clothe yourselves with compassion, kindness, humility, meekness, and patience. 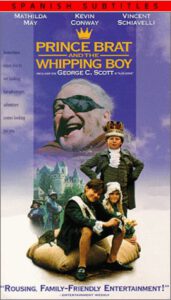 Syd Macartney has done a fine job directing the screen version of Albert Sidney Fleischman’s Newberry Award novel (the author is also the screenwriter). With a story line a little similar in some ways to that of The Prince and the Pauper, the story is set in the mid-18th century in the fictional German town of Brattenburg. The orphaned Jemmy (Truan Munro) lives in the streets with his 8-year-old sister Annyrose (Karen Salt), where he catches and sells rats to tavern owner and promoter Blind George (George C. Scott), and not for scientific purposes. Meanwhile the pampered  Prince Horace (Nic Knight) resides in royal splendor but is neglected by his father the king (Andrew Bicknell), the latter preoccupied with the French Ambassador in preventing a war between their nations. Thus, the Prince continually misbehaves out of pique and the desire to gain the attention of his single parent father,

A couple of the Prince’s pranks threaten the shaky peace between the two nations, so the boy is “punished.” Only he is not the recipient of the whipping, but instead Jemmy is whipped. The boy has been kidnapped off the streets and forced to live in the palace, his rags replaced by the clothing of an upper-class boy. The stuck-up Prince sees nothing wrong with someone else being whipped for his misbehavior, and so the two do not get along—until…

Several times Horace tries to get his distracted father to spend some time with him, and each time the King puts him off. Could there ever have been such a father blind to the needs of a lonely son? Thus, the Prince, falling into despair, decides to run away. Jemmy goes with him.

They have quite an adventure in the forest, at first being kidnapped by two dastardly highway men, Hold-Your-Nose-Billy (Kevin Conway) and Cutwater( Vincent Schiavelli), The two crooks are convinced by Jemmy that he is the prince, and so when there is any whipping called for, it is now Horace who bears the blows. To his credit, Jemmy does not gloat about this reversal of roles.

There is betrayal, a thrilling escape, an encounter with Betsy, a Gypsy woman (Mathilda May) searching for her lost dancing bear Petunia, and more—the latter including the imprisonment of Jemmy’s little sister on false charges of stealing. Plenty of action to hold the attention of young and older viewers—and a good reminder to parents to pay attention to their children. And the journey of Horace from self-absorbed egotist unmindful of the suffering of others to that of caring child who has found a friend is a good lesson for young viewers. It demonstrates well the wisdom of the above biblical proverb.

By the way, if you search IMDB for this film, note that the title there has been changed to “The Whipping Boy,” but it remains the same on the DVD and on Disney and YouTube. Click here to see it for free.

A boy living with his sister in the streets of an 18th century German city is made to be the spoiled prince's whipping boy & when they run away, helps the prince to change for the better.
Editor Rating ★★★★★4 out of 5
More Details