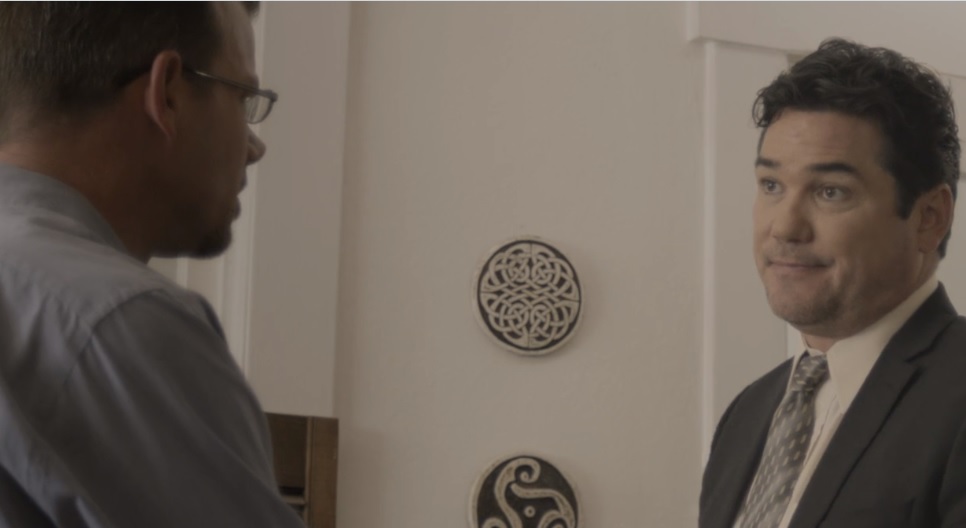 Writer/director Travis Thoms gives an interesting twist to the mystery story in this tale about the aftermath of a devastating fire and explosion. We learn the details of the deadly fire as therapist Murdoch Lane (Addison Foskey) treats a series of the traumatized victims.

Lane’s clients include the young Sarah Blaine (Megan Elisabeth Kelly); the bearded  Ken Walsh (Martin Palmer); the African American Stella Norton (Jenelle Baptiste); and the flirtatious Daisy Mendoza (Michelle Roe).  As they are encouraged by the therapist to recall the incident, there are flashbacks, but these are shot out of focus, so we are as unclear as to the happenings as are the patients. A couple assert that things did not look right in the waiting area, someone/thing was “out of place.” Ken keeps recalling the puzzling smell of diesel fuel. Another thinks she saw her deceased mother. Also a couple recall a young girl with a badly injured arm unable to get the exit door to open.

Lane has just begun the therapy sessions when police Det. Jaime Montenegro (Dean Cain) shows up to ask his help. During the fire, in which so many people lost their lives, a large stash of gems disappeared from the jewelry store housed in the building. This was no coincidence, the policeman asserts, the fire had not started by accident. Lane replies that because of the patient-therapist relationship he cannot divulge anything he is told.

Another important figure in the film is Ezra Dubois (Ciro Vela), an older therapist who seems to be Lane’s mentor, if not his father-confessor figure. Lane share his concerns with this wise man. Aside from Ezra, Lane seems to have no social life. He seems totally absorbed in helping his clients get on with their lives.

This film might seem slow moving by anyone who has been misled by the false posters that imply this is an action thriller. Mr. Thoms’ insightful script is more of a character study, especially of Lane who also has a troubled past. He at times reflects on and talks on the phone with the woman who once was either his wife or his lover. A bit wiser now, he has many regrets and wishes her well.

The unraveling of the mystery comes slowly, with the mother of one of client figuring into the solution. Along the way there is a moving scene in which one of the patients is freed of trauma. The identity of the villain is disclosed, but this threatens to end Lane’s life. The final action takes place and is over so quickly that I find the publicity posters on IMDB reprehensibly misleading. This is a good film for those who prefer the exploration of character over action and violence.

This film is available on DVD and for rent on a number of sites, including Amazon and YouTube. Click here.

While treating a series of patients who survived a deadly explosion, a therapist learns that the fire was cover for a jewelry heist, possibly committed by one of the clients.
Editor Rating ★★★★★4 out of 5
More Details