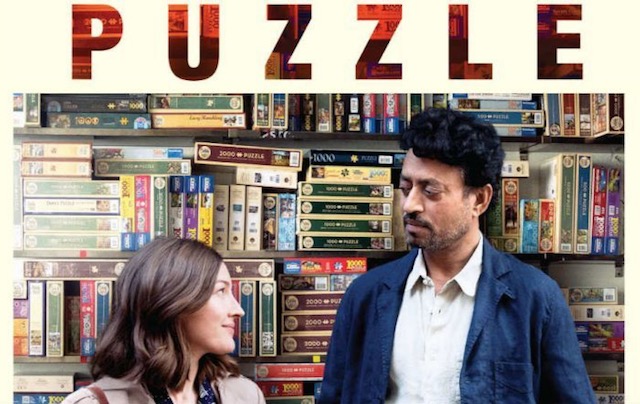 A capable wife who can find?
She is far more precious than jewels. The heart of her husband trusts in her,
and he will have no lack of gain.

She does him good, and not harm,
all the days of her life.
She seeks wool and flax,
and works with willing hands.
She is like the ships of the merchant,
she brings her food from far away.
She rises while it is still night
and provides food for her household
and tasks for her servant-girls.

She had a sister named Mary, who sat at the Lord’s feet and listened to what he was saying. But Martha was distracted by her many tasks; so she came to him and asked, “Lord, do you not care that my sister has left me to do all the work by myself? Tell her then to help me.”  But the Lord answered her, “Martha, Martha, you are worried and distracted by many things.

Whether intentional or not, I found the name of the main character in this film, mostly set during the period of Lent, as very symbolic—Agnes, played exquisitely by Kelly Macdonald. Throughout the first part of the film this middle-aged housewife is as meek as a lamb, until the fateful day when her life takes a far different turn from anything in her past. In the opening segment she is like one of those contented housewives we see in old TV commercials, busily engaged in vacuuming, setting the table, and busying herself in the kitchen for a party. Her family, husband Louie (David Denman), two college age sons, and a few friends are gathered by the time she lights and brings out a birthday cake, and we discover they are singing to her. She has lived all her life in this drab house in Bridgeport, CT., first with her immigrant parents, and now with her auto mechanic husband Louie (David Denman) and college age sons Ziggy (Bubba Weiler) and Gabe (Austin Abrams), her only outside contact being her Catholic church where she volunteers her services.

When she opens the small present that contains an Apple iPhone, she lays it aside with the comment that maybe she can use it in an emergency. An exasperated son says, “Would somebody please tell my mom she has to stop living in the 20th century?” During this sequence when she drops a plate on the floor, she stoops to pick up the pieces. (Note reader Winifred Walker sent the following email to me: “Agnes did not break the plate in Puzzle. Her husband Louie broke it. Big difference. Huge. ” I thank her for this correction!) Finding all but one of the pieces, she glues them back together. At first, we might think this is meant to show her frugality, but we soon learn that it too is symbolic, because the next day she unwraps a present from her aunt and discovers it to be a 1000-piece jig-saw puzzle—a far more challenging one than the half-dozen or so of her plate she had pieced together.

Laying out and sorting the different kinds of pieces, she totally loses track of time, though when finished, she is surprised at how little time it had taken her. For most people this would have required several days, but she has finished it in one sitting! She disassembles it and starts over again, relishing a task that she finds she has mastered so well. This first puzzle is a world map, significant in that Agnes has never ventured far from her home, except for the family vacation cottage in the country. At some point in the film that I cannot recall she points to the city of Montreal as a place she would like to visit. Keep this in mind for a clue to the up-in-the-air conclusion of the film.

Wanting more such puzzles, Agnes calls her aunt, who informs her that she bought it at a puzzle specialty shop in Manhattan. Though about an hour away by commuter train, this is her first trip into the city. Unable to decide which two puzzles of Old Master paintings of a woman she should purchase, she buys both—and she also takes a tear-off of a small ad she sees on the cash register. A man is “desperately” looking for a “puzzle partner.”

Intrigued, she calls up and decides to return to the city to meet with Robert (Irfan Khan) in his sparely furnished townhouse. Another of the film’s symbols is the black cross he is surprised to see on Agnes’s head, placed there earlier that day by the priest at an Ash Wednesday service.

Robert is an inventor by trade,  “desperate” because the first round in the world puzzle championship is coming up in a matter of weeks, and his partner has walked out on him. She was also his wife. He pours out a bag of puzzle pieces to test her skill and is pleasantly surprised to see that she is the best puzzle maker he has encountered. He quickly decides which sets of colors of the pieces they will concentrate on, and there follows a series of twice-weekly meetings at his home. Of course, they grow closer together despite her continual shyness.

Agnes lies to Louie, telling him that her aunt has injured her leg and needs nursing help from the family. He tries to dissuade her, but we see that though she is meek, there is a hitherto hidden reserve of steel in her spine. During this time, we learn more about her home life and a little of her past.

She had been very good in math but was unable to go to college. Louie, who never gave one thought to college, comes across not as an abusive bully but as a self-satisfied lout totally blind to his wife’s feelings and needs. Agnes speaks wistfully of failure to go to college, asking him if he wouldn’t like to learn something just for its own sake. He dismisses this as useless. He is just as blind to the dissatisfaction of one of his sons who hates  his grease monkey job at the family repair shop. The boy longs to be able to go to a cooking school to become a chef—we see he has a talent for this when he cooks a delicious breakfast. Sympathetic to a dream she had not suspected, she decides to help him. Part of Agnes’s discovery of herself and self-will is the way in which she persuades her husband to sell their land and cabin and give it to the boys, which will allow them to follow their own dreams. Louie is upset that a son of his would want to follow a path that he thinks is less than manly.

It is, for me at least, a bit sad that in such a fine film adultery is justified by the depiction of the constrictions forced upon Agnes all her life, but I guess it is inevitable. Irfan Khan’s Robert is so needful and charming that it is easy to see why an equally needful Agnes is drawn to him emotionally. Following a church scene in which the priest celebrates Easter, Agnes experiences it in a different form when she and Robert arrive at the puzzle contest. Her Easter is not the conventional big victory, nor a finding of True Love in the arms of another. The film ends on a different, an ambiguous, note in which we see that she has for the first time in her life made a decision based on her own desires and related in no way to a man in her life.

Director Marc Turtletaub, better known as the producer of such films as Loving and Little Miss Sunshine, based this film on the Argentinian filmmaker Natalia Smirnoff‘s 2009 Rompecabezas. He shows that even though a man, he can deal sensitively with the struggle of a woman slowly learning to assert herself against unjust male dominance. There is plenty to talk about in this challenging film, one that could profitably b discussed in conjunction with two other films about dissatisfied wives reviewed here—The Escape, in the June 2018 issue, and Tully in the August VP. London housewife Tara, in the first film, is far more conscious of the constrictions of her condition as a wife and mother than Agnes, telling her husband in bed, “I am unhappy.” She asserts herself by setting forth on a journey to Paris. She certainly would understand Agnes’s decision, wouldn’t she? How different is the resolution in Tully for Marlo, also a frustrated wife and mother married to a man who “doesn’t get it.” She brings in a night nanny to help with her new-born infant, so she can get more sleep. The film ends with what is essentially an acceptance of her situation, she being told, “Despite what you may think sometimes, you’ve SUCCEEDED.  You’ve succeeded in creating a stable ‘boring life’ for yourself with people who depend on you. YOU SHOULD BE PROUD. “Quite a different viewpoint!

Agnes has probably heard the above passage from Proverbs read in church, perhaps on Mother’s Day. This film is the chronicle of her moving from this understanding of her role under a patriarchal system—note that this description of “the capable wife” starts from the standpoint of the husband! —to a more freeing role in an egalitarian system taught by Jesus, though we might debate as to what he might say about her final act in the film. Whatever the future holds for Agnes, we can at least assume that she will have far more of a say in it than in the past.

Agnes, a housewife as meek as the animal she is named after, discovers her selfworth & ability to assert herself when she discovers she is a gifted puzzle maker.
Editor Rating ★★★★★4 out of 5
More Details