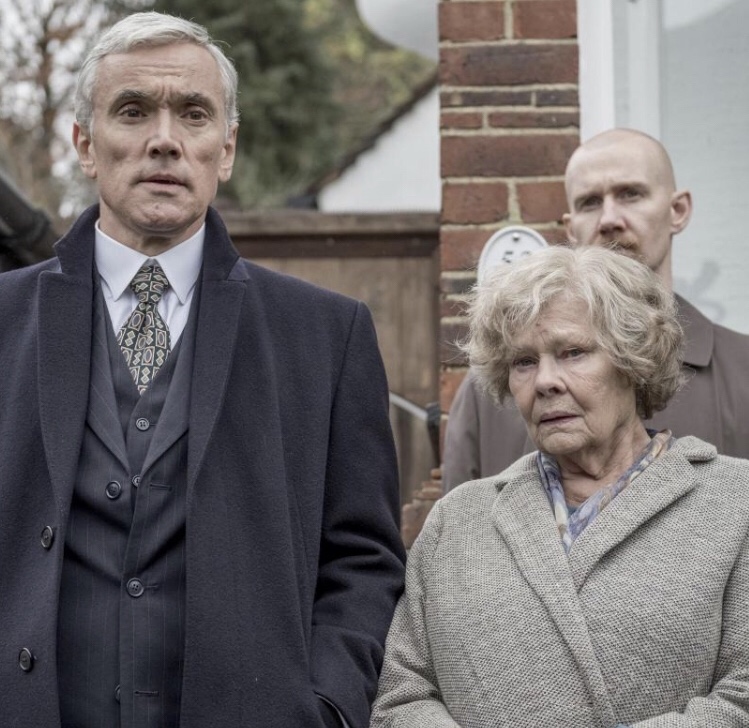 Judi Dench is such a capable and beloved actress that it is understandable if viewers root for her octogenarian character Joan Stanley (played by Sophie Cookson in the flashbacks to Joan’s younger days) when she photographs documents from her atomic research lab and passes them on to the Soviets in the 40s and 50s. When she is arrested and interrogated by British intelligence agents, she eventually admits to and justifies her crime with a lofty ethical argument. The film is directed by Trevor Nunn and adapted by Lindsay Shapero from Jennie Rooney’s bestselling novel, which in turn was inspired by the real-life spy story of Melita Norwood.

The action shifts back and forth between Joan in her mid-80s being interrogated in an M15 room and her past as she speaks and thinks about her past life. During her school years at Cambridge she had become friends with the glamorous fellow student Sonia (Tereza Srbova) and her handsome cousin Leo (Tom Hughes). They are German Jews and committed communists, who attract Joan to their student meetings and activities. Leo speaks at student demonstrations against Fascists and on behalf of the Spanish Republicans. With Sonia’s encouragement Joan falls for Leo and his call for “a chance to rebuild civilization in a totally new way.”

Upon graduation with a degree in physics, she finds employment in a government research facility where she at first faces the usual indignities faced by women in the male dominated sciences. A visiting group headed by PM Clement Atlee (Harold Soan) comes to decide about further government funding for the work. The PM mistakes her for a tea fetcher. Fortunately, her boss Max Davis (Stephen Campbell Moore) recognizes her abilities and has promoted her to be his assistant. In a rare (for the time) moment he later defends her status to his colleagues. The PM gives Davis the green light to expand their theoretical work to lay the groundwork for constructing an atomic bomb, the thought of which troubles Joan.

During a trip to Canada Joan encounters Leo again, and though she has felt an attraction to the married Max, her romantic feelings for the still dashing firebrand is rekindled. However, this cools when he attempts to pry information about the atomic project from her, Joan turning him down. It is known that the Americans have begun their “Manhattan Project,” but they are no longer sharing research information. The Brits think this is very contrary to accepted culture of openness and sharing that had once prevailed.

When the Americans kill tens of thousands of Japanese civilians by their atom bombing of Hiroshima and Nagasaki, Joan is so upset that she changes her mind. She deems the balance of power following the war too one-sided, so she accepts a miniature camera from the Soviets and begins her long period of passing on plans for the British atomic devices to Stalin’s agents. She apparently overlooks his brutal purges and deportations of his enemies to the gulag system. During this period Max is able to secure a divorce from his wife so that he and Joan can marry. They have a long marriage during which he eventually learns of her espionage activities but neither approves of it nor turns her in.

Neighbors and Joan’s grown son Nick (Ben Miles) are shocked when the widowed Joan is arrested and required to wear an electronic leg anklet. Joan asks her son to defend her, he being a lawyer, but at first, he is so opposed to what she has done, that he puts off answering her. What a shock it must be for a son to discover that his mother has betrayed her country by giving its greatest enemy secretes enabling it to build its atomic bomb years ahead to its expected schedule!

What a difference the years since the close of the Cold War have made. I recall seeing dozens upon dozens of spy and adventure films in which a hero thwarts evil Soviet agent from achieving their dastardly goals. Not so here, with the elderly Red Joan interpreting her treasonous acts as an attempt to even the sides in the Cold War. Think the James Bond series and The Man From U.N.C.L.E. She describes what actually became official policy, the mutually assured destruction of both sides if one or the other were to use an atomic weapon. It worked, she proclaims, there being no further destruction by an atomic weapon in over 50 years. “I was fighting for the living; I loved my country!”

The film offers plenty of food for thought and debate, including scenes in which it would seem her romantic feelings for the Communist Leo were mixed in with her desire to even the playing field between the Soviets and the West. Was she being naïve, as son Nick at first asserts, a pawn used by the murderous Soviets? Apparently neither she nor Leo ever read the ground-breaking book that Arthur Koestler and five colleagues, all disillusioned by their experience in the Communist Party, published in 1949, The God That Failed—the book is never mentioned in the film. After Stalin’s horrible crimes were widely exposed, one would be like those condemned by the ancient prophet, calling “evil good, and good evil” if one were to remain in the CP.

Ayoung woman scientist becomes part of Britain's atomic bomb team & after WW 2 out of ethical reasons passes on secrets to the Soviets.
Editor Rating ★★★★★4 out of 5
More Details