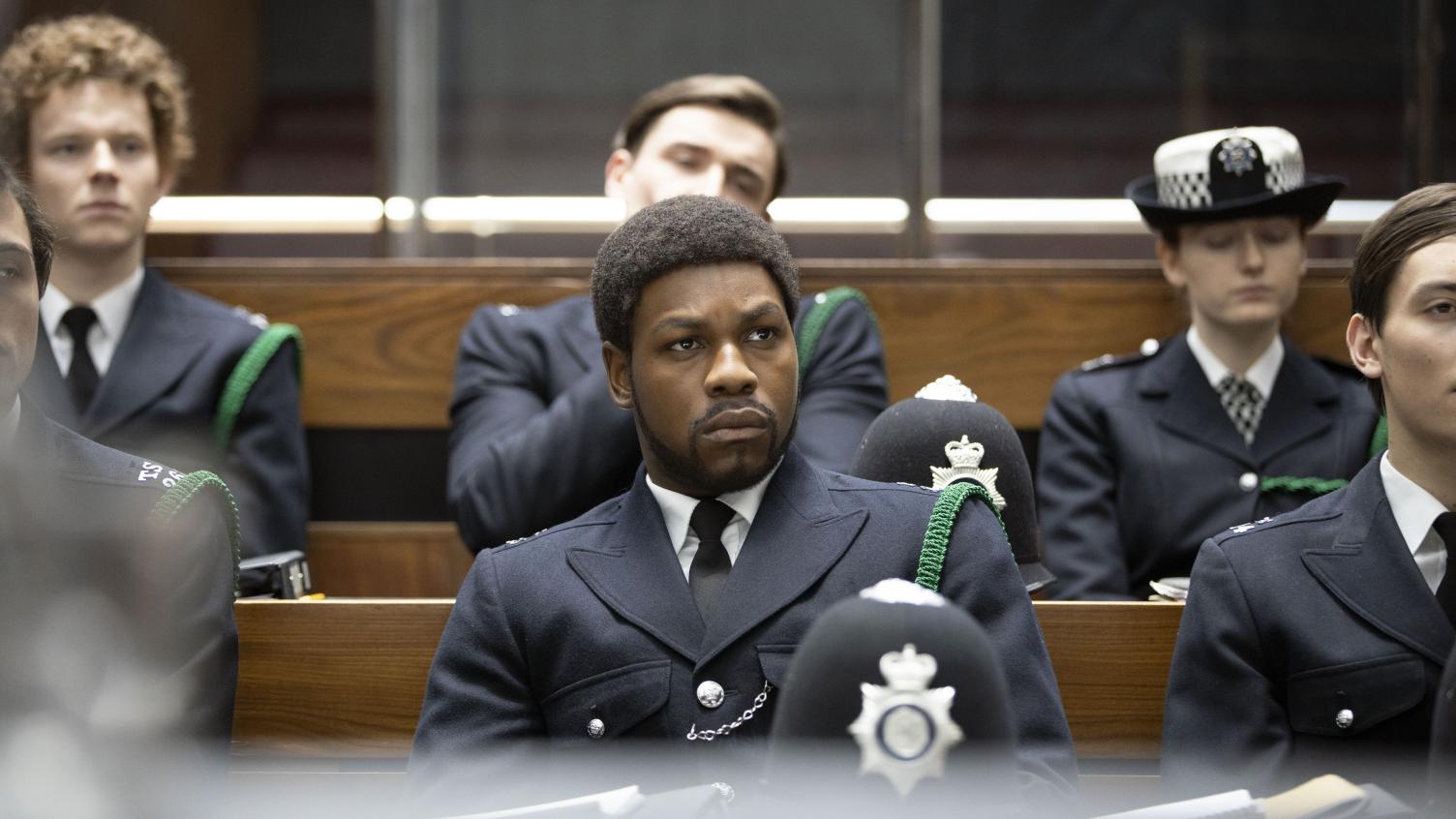 My heart throbs, my strength fails me;
as for the light of my eyes—it also has gone from me.
My friends and companions stand aloof from my affliction,
and my neighbors stand far off.


Vindicate me, O God, and defend my cause against an ungodly people; from those who are deceitful and unjust deliver me!

As in Mangrove, Steve McQueen bases his film on real life incidents. Beginning when Leroy Logan was a boy harassed by a racist London Bobbie and ending when he is  a member of the London Metropolitan Police and seems about to give in to despair, it reveals how entrenched racism is, and thus how difficult it is to fight it. The difficulty is enhanced when Leroy’s own father opposes his decision to join the force.

The film’s early scenes show 14-yea-old Leroy (Nathan Vidal) being harassed by a policeman while waiting for his father. The cop claims that the boy resembles the description they have of a young robber—even though Leroy is dressed in his school uniform. His father Kenneth (Steve Toussaint) berated the officer and then gives his son the equivalent talk that African-American fathers give to their son about what to do when stopped by the police. Years later Leroy witnesses his father being unjustly beaten when he questions why the police are citing him for blocking traffic when his truck is clearly not blocking traffic—it was probably due to his taking out his measuring tape to prove this that triggered the cops’ wrath. So badly beaten and hospitalized that there is no doubt of the cops’ guilt, he is offered a lucrative settlement but refuses. “I want my day in court,” he says, showing a determination that he will impart to his son in a later struggle.

As a man Leroy has obtained a PhD and is working as a scientist in a forensic lab, but he finds this work  dull. He decides to act on his dream of becoming a policeman, both because it offers more excitement and because he thinks he can combat racism from the inside. Not only is his father upset, but so are his friends.

Leroy starts his training at the academy on the wrong foot by answering their instructor’s question as to why they want to be a policeman with, “I’m not here to make any friends. I’m here to help bring change to this organization from the inside out.” There is one person of color, Asif  (Assad Zaman), but this Pakistani will not be able to stand the pressure for long. In the dorm he hears Reggae music, so he thinks there might not be another person of color, but the listener turns out to be white, though also to become a friend. His trainers seem even-handed, but when he puts on his helmet and badge, he finds racism endemic—and possibly jealously as well because he has been used as the poster boy for the department’s campaign to recruit more “coloreds.”

There is an exciting chase sequence in which he apprehends a robber and during which no one answers his call for backup. There are cops nearby, but none willing to come to his aid. In the locker room he will receive harsh stares and hear racist remarks. Someone scrawls the “N-word” on his locker. Time passes, and although he graduated at the top of his class, he is passed over for promotions while the less qualified rise in rank. His immediate superior to whom he complains at times is cold, barely hiding his own prejudice.

Even worse for Leroy are the insults and taunts he receives when he patrols his beat or arrests someone. A teenager calls him “Judas!” Others call him “Traitor.” Ad his father remains upset with him, barely containing his rage at times. His wife Gretl (Antonia Thomas) stands by him, but is  able to offer but small comfort. Pressed from all sides, he feels the isolation voiced by the psalmist, especially when the only other minority cop folds and quits, Asif. There comes a point when he can bear no more, deciding that one man cannot make a difference after all. Ironically it is his father Kenneth, the man with the most reason to hate the police force, who offers a ray of hope. In the closing scene he tells Leroy, “Big change, it is a slow turning wheel.” They share a drink, toasting, “To something good.”

The ending seems very abrupt, with just the end credits telling us that Leroy Logan rose in the ranks to a superintendent, even being decorated for his service by the Queen. It may be that co-writers McQueen and Courttia Newland wanted us to understand better the cost of racial improvement. Or, maybe they wanted to elevate the theme of father and son to that of racism in their film. This is indeed a father-son film, with the two actors Steve Toussaint and John Boyega drawing us into their characters’s feelings by their superb acting. At first at polar opposites, the two nonetheless love each other. Underscoring this is the use of the Al Green song “How Can You Mend a Broken Heart” on the car radio as the father drives his son to the police training academy. Though written about a disappointment in romance, the song easily applies to both men, and, later in the film, the following verse especially to Leroy:

How can you mend this broken man? (yeah)
How can a loser ever win?
Somebody please help me mend my broken heart
And let me live again

After reading the closing notes revealing that Leroy Logan bounced back from this low point in his journey to become a great success as a policeman, another, much older song came to mind, the old spiritual used so effectively in Harriett, “Keep your eye on the prize, hold on.” It was a song that gave hope not only to the slaves who created it, but during the uphill battle for equal rights to the thousands of activists who sang it at freedom rallies and while marching and demonstrating. It might have lifted the heart of Leroy Logan, but fortunately he did “hold on” and, to borrow a term from the psalmist, was “vindicated.”

Note: If you are like me and believe the film ended too soon, there is a fine article in The Guardian that tells in detail the exciting career of Leroy Logan and his feelings about the movie. It ends on a delightful note. He took his parents with him in 2000 to Buckingham Palace to see him receive an MBE from the Queen, his father leaning over to tell him, “I suppose you did the right thing joining the police.”

The true story of London Bobbie Leroy Logan who as the first Black recruit fought against the racism of the London Metropolitan Police establishment.
Editor Rating ★★★★★5 out of 5
More Details