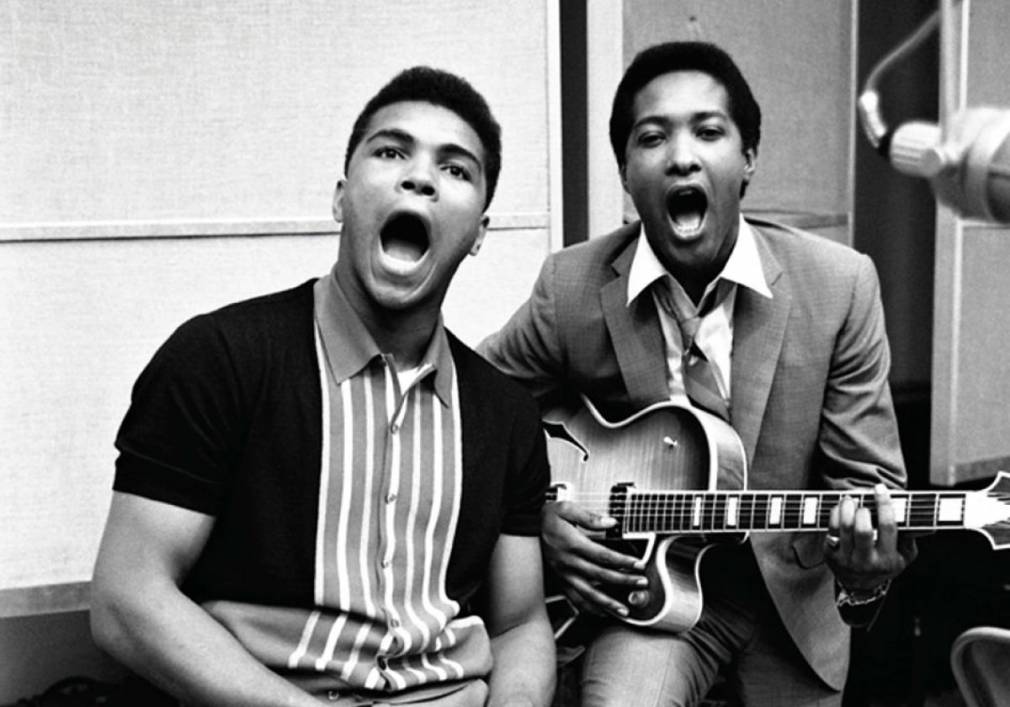 Director Kelly Duane’s documentary makes viewers appreciate legendary singer Sam Cooke even more, thanks to the many musicians and music industry people she interviews, interspersing them with archive photos and footage. She follows the practice of using only the cogent answers of her subjects without ever appearing on camera herself. If you enjoyed the speculative film Miami you will really appreciate her film with its comprehensive background of the singer’s life, even if the title and the last part of the film (about 13 minutes) covering the singer’s controversial death might be questionable.

Born in the Depression year of 1931 in Mississippi, Sam’s minister father moved the family to Chicago in 1933, where the boy grew up with his siblings singing in a church group. As a teenager he joined The Soul Stirrers, which had a recording contract. While he was with them he wrote several of their songs. Sam’s decision to cross over from gospel to secular music did not go down well with some church people but his Baptist father supported his decision. “Devil’s Music,” it was called by some, a charge that a great many White ministers and parents would later take up against the rock and roll music of their youth.

As Sam’s good looks and smooth velvety voice won him a large following, he encountered racism everywhere, but especially when touring the South. The film goes into detail how the vicious murder of Emmet Till in 1955 impacted Sam—the boy was murdered in the state where Sam was born and was from the city where Sam had grown up. In Memphis Sam refused to sing at the auditorium where segregation was in force, something which the other black entertainers on the program said they agreed with, but come the day of the show, Sam was the only one who stuck by the agreed upon decision. (For me one creepy detail is that Sam was staying in the same motel—the Lorraine—where Dr. King would be murdered in 1968!)

Cooke’s scheduled appearance on a show in Atlanta that Dick Clark was emceeing incurred the wrath of the KKK and other bigots, both host and guest receiving death threats, but Clark remained committed to promoting Black artists, and thus refused to give in to the pressure to cancel the show or Sam’s participation—he was the only Black performer. The National Guard had to be brought out to protect the theater and performers, and the show went on without a hitch.

The section of the film that especially caught my attention dealt with Sam’s friendship with boxer Cassius Clay, Malcolm X, and football player Jim Brown—indeed, the latter is among the long list of Kelly Duane’s interviewees. We see news clips of the Clay-Liston fight and of the aftermath when Clay invited his friend, Cooke and not his mentor Malcolm, to join him in the ring as he shouted to the crowd and the reporters. The film does not speculate on the conversation of the four in Malcolm X’s Miami motel, although we do hear interviewee Jim Brown say, “Being a successful musician wasn’t enough for Cooke. I was also sick of scoring and winning matches. When you become a crossover celebrity in this country you wonder whether you should be careful or if you should speak the truth and get involved?”

One thing is clear, however, from this documentary, Sam Cooke was far more into Civil Rights than the Malcolm X in One Night in Miami gives him credit for. The singer was an avid reader of James Baldwin, and the “King of Soul” had long refused to sing in segregated venues, as noted above. His interest in setting up his own record label and owning the rights to songs was as much for the benefit of the other singers signed to him as for himself. And he did not hold back on voicing his views to the public. In a  1960 radio show he declared, “I’ve always detested people of any color, religion or nationality who lack courage to stand up and be counted. It is a difficult thing to do, but I hope, by refusing to play to a segregated audience, it would help to break down racial segregation here.”

Both films do credit Bob Dylan’s great song “Blowing in the Wind” as impacting Sam, eventually leading to him writing “A Change Is Coming.” But it was a couple of years before that night in Miami that Sam heard Dylan’s song and marveled that a white, rather than a Black man, had written it. Sam Cooke even covered the song, making its own by changing its folk song tempo to one that people can dance to—and we see exactly that in the clip in which Sam sings, and as he draws close to the audience, a teenage girl sitting in the front row gets up, quickly followed by all the others, and starts dancing.

This is a good place to pause and compare Sam’s “A Change is Gonna Come” with Bob Dylan’s, both of which are considered CR anthems. The White artist’s song is from a third person perspective, one who is compassionately concerned, but somewhat at a distant from the victimized. Sam Cooke is directly involved, as we see, the song beginning with “I”—”I was born by the river in a little tent.” He is directly affected by segregation, “It’s been too hard living…” (And what follows in this line—” but I’m afraid to die/’Cause I don’t know what’s up there, beyond the sky”—leads some to compare this song with the soul-stirring number from the 1927 musical Show Boat, “Old Man River.”) In the 3rd verse Sam remembers when he could not even go to a movie or shop in a store without being discriminated against, “I go to the movie and I go downtown/Somebody keep tellin’ me don’t hang around.” He laments that when he turns to his “brother,’ recognizing that Whites and Blacks are kinfolk, the “brother keeps “ knockin’ me/Back down on my knees”—perhaps an allusion to all those images of Civil Rights demonstrators being knocked down by club wielders, or the marchers kneeling in prayer before armed sheriff’s deputies. (One of the interviewees reports that RCA cut the verse when they first released the record—no doubt because the White execs feared such a direct reference to racism would hurt sales in the South.) At the end of all the verses Sam affirms, “It’s been a long, a long time coming/But I know a change is gonna come, oh yes it will.” For an “anthem” there is little militancy, but there is resilient hope. The music is not from the folk genre but rhythm and blues, the latter part totally based on a hope for better times.*

The roster of interviewees, most of them Sam’s contemporaries—singers. musicians, managers–is large, including Quincy Jones, Smokey Robinson, Dionne Warwick, Lou Adler, Billy Davis, and many more—even novelist Walter Mosley. Several talk about his refusal to deal with the Mob that sought a piece of his pie, as well as his complicated relationship with his music manager Allen Klein, whom he discovered was cheating him and scheming to seize ownership of his music empire. His plan to fly to New York to confront Klein was prevented by his untimely death at the Hacienda Motel, Los Angeles, California on the night of December 11, 1964.

One of those who was with him at supper and last saw him tells of his picking up a woman named Elisa Boyer    and then going to the motel with her. It was there that Cooke was shot and killed by the motel manager Bertha Lee Franklin. According to the court record the woman Cooke took to his room was a sex worker who claimed that Sam was abusing her, so she fled with his trousers that contained his wallet. The angry half-naked Cooke searched for her, knocking on the manager’s door while demanding, “Where is the girl?” He forced his way into the office, they grappled, and she managed to run away to get her gun. Meanwhile Boyer was at a nearby telephone booth calling the police that she had been kidnapped. In the motel office Franklin shot Cook, and when he cried out but kept coming toward her, beat him on his head with a broom stick.

The court ruling was that his death was a justifiable homicide. (For a more detailed account of this see the Wikipedia article “Sam Cooke.”) All of Cooke’s relatives and associates disagree with the verdict. There are inconsistencies in Boyer’s account of her time spent with Cooke, witnesses reporting that she was a willing companion, not a kidnapped victim. One theory is that she was out to rob Cooke. Others see a far more sinister hand in Cooke’s death—perhaps the Mob, or even the FBI (which for a period in those years was harassing Black leaders, and supposedly even assassinated several Black Panthers.)

One thing everyone seems to agree on is that the racist LAPD, by refusing to investigate the situation, demonstrated its contempt for Black victims, in effect declaring that they are not worthy of its attention. I tend to agree with those who, pointing out Sam Cooke’s sexual promiscuity—he fathered at least three children out of wedlock—believe that Sam Cooke was a victim of his own misguided act (This documentary, though not exactly painting him as a saint, does not delve much into his darker side ).

If only he had stayed with his friends that night, what more great songs might we have today?* If you like Sam’s song, be sure to see the article “’A Change Is Gonna Come’, a hymn for Civil Rights” by Elodie Maillot. It includes two videos, one in which Dick Clark interviews Cooke, and another of this song with images brilliantly inserted to suggest the world-wide applications of the anthem. For the first verse we see shots of the 1963 March on Washington, Dr. King, a BLM protestor. During the first chorus, “It’s been a long time coming” we see Dr. King; during the second, the picture of Nelson Mandela looking out the barred window of his cell he was confined in for 27 years; during the third chorus, anti-war demonstrations, the Berlin Wall, and Pres. Reagan and Premier Gorbachev grasping hands; and more uplifting images at the conclusion, ending with the famous shot of the Earth rising above the lunar landscape.

This review will be in the February issue of VP along with a set of questions for reflection and/or discussion. If you have found reviews on this site helpful, please consider purchasing a subscription or individual issue in The Store