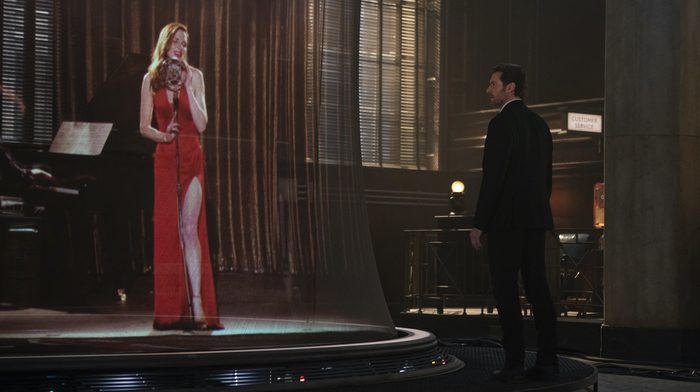 I consider the days of old, and remember the years of long ago.


This day shall be a day of remembrance for you. You shall celebrate it as a festival to the Lord; throughout your generations you shall observe it as a perpetual ordinance.


Then he took a loaf of bread, and when he had given thanks, he broke it and gave it to them, saying, “This is my body, which is given for you. Do this in remembrance of me.”

Writer-director Lisa Joy blends film noir with science fiction in this tale set in a near future Miami whose streets are being flooded as climate change causes the ocean to rise. Nick Bannister (Hugh Jackman) is the jaded “detective” whose specialty is the past, and the film is laced with his dark, cynical utterances such as, “If there are ghosts to be found it’s us who haunt the past,” and, “Time is no longer a one-way street.”

Those remarks refer to Nick’s occupation. He’s “a private investigator of the mind.” His clients are mainly people wanting to revisit their past or to remember something they have totally forgotten. He also works with the D. A. on criminal cases. His clients lie down in a water-filled immersion capsule which he calls “the tank,” a set of electrodes connected to their head. Serving as a tour guide, he intones, “You’re going on a journey. A journey through memory. Your destination? A place and time you’ve been before. To reach it, all you have to do is follow my voice.” As the client slips back into the memory, the machine projects a 3D hologram of it that can be seen by the operator and also recorded for future playback.

Assisting Nick is Emily “Watts” Sanders (Thandiwe Newton). Both of them served in something vaguely referred to as “the border wars,” so Watts is skilled in martial arts and shooting, as well as the cutting edge technology. The former will come in very handy when Nick is in dire danger in New Orleans.

As in every film noir the femme fatale enters seeking the jaded hero’s services. Mae (Rebecca Ferguson) claims to need Nick’s memory device to find her lost keys. Nick, of course, falls hard for her during their brief fling (earning the film its PG-13 rating), after which the plot grows more complicated when it appears that Mae has played Nick out of ulterior motives. Enter crooked cop Cyrus Boothe (Cliff Curtis) and New Orleans drug lord  Saint Joe (Daniel Wu), who bring violent conflict and danger.

The talented cast makes the best out of a script that falls into confusion in the last third of the film. Still, it is worth the time, effort, and expense to see it. The theme of remembering and remembrance are central to the Hebrew and Christian faiths. A word search in the RSV Bible will bring up almost 300 instances of “remember” and over 80 of “remembrance.” The central celebration of the faiths—Passover and The Lord’s Supper—both include the command to remember a specific historical event. (And it just occurred to me that this relates to the gourmet meal served up by the protagonist of another film reviewed in this issue, The Pig, though that film has no immersion tank.)

While fascinating during the first half, ultimately the film turns out to be a disappointment—not just in the confusion of the last part of the script, but mostly due to the sad decision that Nick makes at the end of the film. He chooses to escape his world of disappointment and enter into the loop of recalled memory that he had warned against. Earlier Mae had said, “Men are strange, aren’t they? They don’t see what’s right in front of them.” For years Nick and Watts had worked together side by side. She had remained single, possibly because of an unrequited love for him, one he was too blind to see. To refer to Joseph Campbell’s concept of the Hero’s Journey, which so many Hollywood scriptwriters use as the pattern for their scripts, Nick never finishes his journey. Early on he had said, “Nothing is more addictive than the past.” Too bad he doesn’t heed the implied warning of this as he seeks bliss by immersing himself in his tank!

A sci-fi film noir in which Nick, an investigator of the past via neuro technology, searches for the woman he loves, who might have betrayed him.
Editor Rating ★★★★★3.5 out of 5
More Details