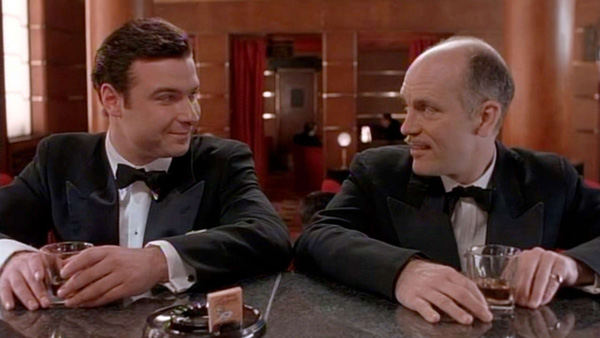 
His wife Jezebel came to him and said, “Why are you so depressed that you For what will it profit them to gain the whole world and forfeit their life?


If I have the gift of prophecy and can fathom all mysteries and all knowledge, and if I have a faith that can move mountains, but do not have love, I am nothing.

Even as the NetFlix film Mank gives us more of Herman Mankiewicz’s version of the writing of Citizen Kane, this HBO film gives Orson Welles far more credit for its authorship. The film’s title refers to the production number that RKO Radio Pictures gave to the script. The writers of both Kane movies add fictional touches, but scriptwriter John Logan delves far more into fiction than the makers of Mank. He has admitted that he did little research beyond studying the PBS documentary The Battle Over Citizen Kane. Still, this is a fascinating take on the subject, especially with the valuable addition of Welles passionate defense of his film back in New York where RKO stockholders were to vote on selling it to Welles’ enemies who had offered to buy it.

Almost right away you will think of Citizen Kane because right after a brief cold opening with the boy Orson and his bedridden mother, there is a fast-paced montage of simulated news reel shots encapsulating Welles’ meteoric rise to fame. Welles conquers Broadway, then radio, at last Hollywood and the lucrative deal with RKO giving him full control over his movie projects. This is all breathlessly described by a narrator effusively praising “The Boy Wonder” while mocking him at the same time. The cynical reporters watching the montage in the screening room seem eager for the new Hollywood arrival to fall flat on his face.

Switch to, Orson Welles (Liev Schreiber) and Herman Markiewicz (John Malkovich) getting dressed in their  tuxedos in preparation for dinner at the lavish San Simeon where newspaper mogul William Randolph Hearst (James Cromwell) and his mistress Marion Davies (Melanie Griffith) reign supreme. There at the block-long dinner table the acerbic tongue of Welles displeases Hearst, much to the consternation of Mank who is friends with Davies. It is this clash, according to this film, that inspires Welles to focus his proposed movie upon a power hungry newspaper publisher starved for love. However, Welles does disavow that the movie mistress, Susan Alexander, is based on Marion Davies.

The writing and production take place from June to December 1940. It includes such famous incidents as digging up the studio floor so the camera can be placed low enough to achieve the angle Welles wanted us to see Kane and his supporters. Also, the decisions to change the protagonists last name from Craig to Kane, as well as the film’s name from American to Citizen Kane. Other participants that we see in the story are RKO CEO George Shaefer (Roy Scheider), the two rival gossip columnists, Louella Parsons (Brenda Blethyn), Hedda Hopper (Fiona Shaw), MGM chieftain  Louis B. Mayer (David Suchet), John Houseman (Simeon Andrews, in a much smaller role than the actor had in Mank) and many more Hollywood notables, including cameos of Welles’ cameraman Gregg Tolland and that Chief Musketeer, Walt Disney (in a scene that adds a touch of humor to the otherwise somber undertakings).

Among the many scenes I especially enjoyed is the one of Orson working on the script and thinking of putting into Kane’s mouth the words, “Who knows what lurks in the hearts of evil men? The Shadow knows!” These were the words that Welles wrote and read at the beginning of his popular radio show he had produced “The Shadow.” I recall as a kid that all of us fans of “The Shadow” knew and loved to recite those familiar words in stentorian style for our mutual amusement, not knowing then anything about their famous author.

Having loved James Cromwell in Babe, I found it hard at first to dislike him as Hearst, but his actor’s artistry soon won out. Once the advocate of the Common Man, as John Foster Kane was in Welles’ film, Hearst had become a reactionary by 1940, strongly opposed to the New Deal—early in the film he says, “Roosevelt is a Bolshevik. He’ll have us at war with Germany in a year.” At that first meeting at San Simeon when Mank and Welles look over the many glass-topped cases displaying a dozen or more of the front pages of Hearst newspapers, Welles observes from a headline that the mogul seems favorably disposed toward Hitler and the Nazis—as indeed were other prominent Americans of the time, including Henry Ford and Charles Lindberg.

Welles and RKO manage to keep the content of their film secret for a good while, but of course, word of its subject does get out when Hedda Hopper gets to read the script and dashes off to inform Hearst before her rival Louella Parsons, who works for him, gets wind of it. Hearst immediately summons Parsons and upbraids her for her failure to discover the film’s content. “I pay you a good deal of money; why didn’t you know about this?”  Parsons is upset that Welles, whom she has interviewed, has deceived her. “I want blood,” she vows. “Good,” Hearst responds, “retain that feeling.” Thus, the war, so well presented also in Mank, begins, with the famous plot of the studio executives, all beholden to Hearst, to buy the film and destroy the negatives and prints. Hearst’s operatives have files of the sexual scandals of virtually everyone in the film industry, so all the studio heads quiver at the damage he could inflict on all their careers if they do not do his bidding. (We even see a bit of Hearst’s anti-Semitism in his conversation with Mayer when he was instructing the mogul to gather the studio heads together to come up with a plan.)

Welles and Mank are drinking in a bar when RKO chief George Schaefer walks through the door just as Welles is quoting Mark 8:36 and Mank makes a joke about it. George informs them of the offer to buy and destroy their film for $800,000. He fears that the stockholders, who will be meeting soon in New York, will accept the deal. Welles explodes, insulting and slandering  the executive. He even overturns their small table. However, before George can exit, Welles rushes after him, apologizes, and asks for the chance to speak to the stockholders.

At the New York meeting Welles gives a summary of what Hitler is doing in Europe and how he has taken away the voices of the people. He switches to America and speaks of how Hearst has grown so powerful and threatens the voices of opposition here. He compares Hearst’s vast powers with his own little dream and asks that they not take this voice away. As he sits outside awaiting their decision, George joins him to inform him of the outcome, announcing, “We open on May 1.”

I appreciate that the film does not paint Hearst in a totally dark light by including the sequence in which the bankrupt Hearst is being forced to liquidate his vast holding because his newspapers have been losing so much money. Far from abandoning him as the gold digging mistress in Welles’ movie would have done, Marion stands by and comforts him. But unlike Kane in his movie, who perfectly fulfills the apostle Paul’s words about the necessity for love quoted above, Hearst will not end his days alone. (Marion Davies will stick with him until the end of his life.) He signs the bankruptcy papers that his lawyer lays before him, stoically accepting his ill fortune. The camera shows workmen crating his art objects and hauling them away until the vast marble halls of San Simeon are empty, thus echoing the ending of Citizen Kane with its basement full of crates and art objects Kane has collected.

Thus, we have two versions of the writing of the great movie, each fascinating in its own way. The first meeting between Hearst and Welles depicted in this film never happened, which weakens the moviemakers’ veracity.  And the film’s elevator encounter between the two antagonists, which is based on Welles’ own testimony, is also disputed by some film historians. Yet, I would not want to give up this film. I don’t know whether Welles’ speech to the RKO stockholders went as reported in what for me was the highlight of the film. (This is so well written that I will be sharing the whole speech in the discussion questions.) The film does not mention that the film was screened at the meeting, and that Welles agreed to shortening it by three minutes and toning down some of the Hearst references, so the speech might well be the invention of screen writer John Logan. Nevertheless, it is a great scene, and resonates well today when those in power seek to silence voices critical to their ways.

The Battle over Citizen Kane, which was writer John Logan’s main source, pictures the battle as between two titans of equal power—the one ruler of a vast media empire and a hold over the studio heads, and his adversary a genius of great talent well able to stand up for his work. However, Logan suggests that they were far from equal in power, more like that between David and Goliath, or the one in the First Book of Kings where King Ahab seeks to buy a vineyard from his subject Naboth. That was a far from an equal contest, with the king’s unscrupulous wife willing to plot the death of the resistant commoner so that her husband can obtain the property. In defending his film, Welles is made to say that it “is all I have.” In his speech to the stockholders he draws a sharp contrast between Hearst and himself:

Available on DVD & VHS, this is a film well worth the time to hunt down—one good place, beside Amazon, is your local library.

For a long detailed article see Wikipedia’s “Citizen Kane.” There’s even a second Wikipedia piece on the script itself that is also full of information

.This review will be in the January issue of VP along with a set of questions for reflection and/or discussion. If you have found reviews on this site helpful, please consider purchasing a subscription or individual issue in The Store.

In this version of the creation of CITIZEN KANE by Herman Mankiewicz and Orson Welles, the latter is favored as contributing the most to the script.
Editor Rating ★★★★★4 out of 5
More Details