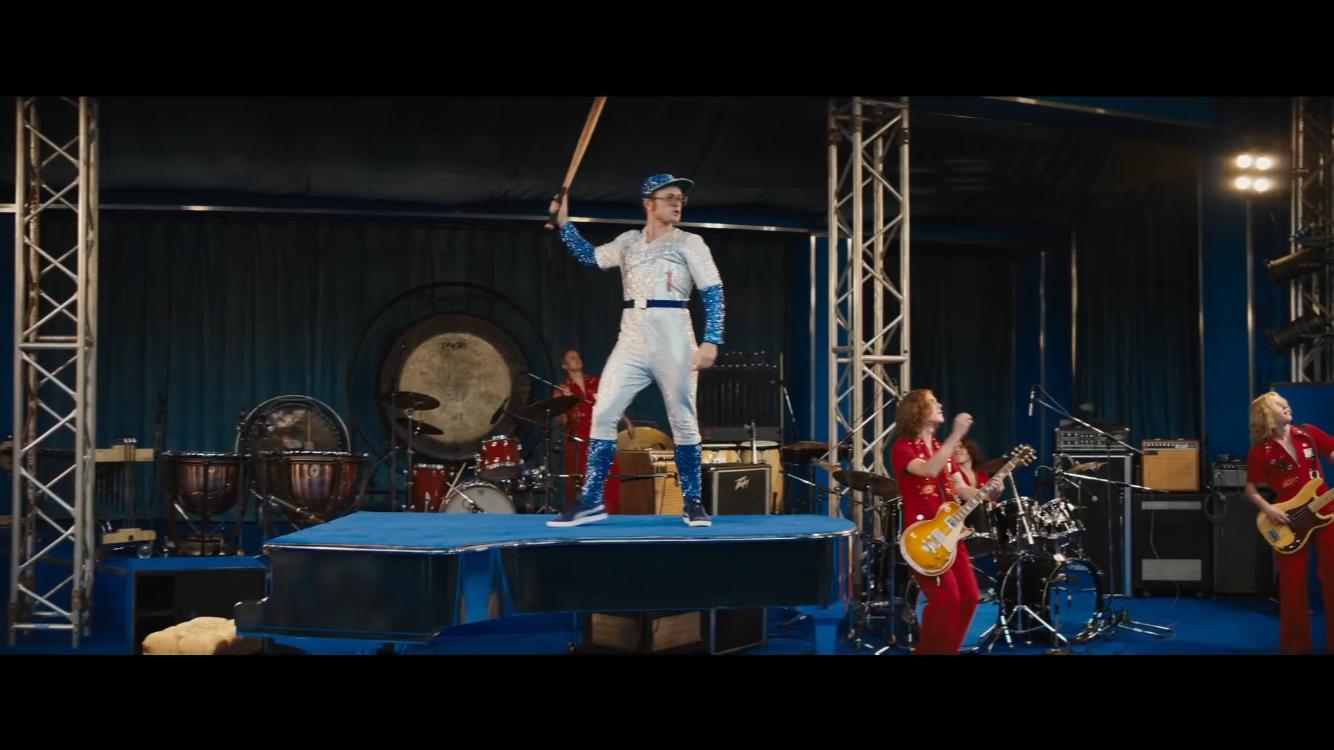 The long-awaited biography of Elton John will surely please fans of the musician’s iconic music. Dexter Fletcher, who finished directing last year’s musical bio Bohemian Rhapsody after Bryan Singer was fired, adds more than a touch of fantasy to his new film covering Elton John’s youth, life and career during the 70s and 80s. For some critics, the film is a series of lavishly produced musical productions with the biographical material as filler, but I found much of the dramatic scenes as moving as they were informative. As an example of the latter, I was not aware that young Reginald Dwight (before his name change, and well played by Matthew Illesley and Kit Conner at different ages, both of whom can sing as well as act) was almost a child prodigy at the piano who studied at the Royal Academy of Music on a scholarship.

Lee Hall, author of the wonderful Billy Elliot, frames the story with John’s attendance of an AA meeting at a posh sanitarium in 1990. The fantasy begins right away with John (Taron Egerton)—dressed in a glittery orange chicken costume with a horned devil’s head—entering the room, causing no stir among the circle of addicts. No one seems surprised that such a world-famous celebrity should join them. He begins by listing his addictions, from alcohol and drugs to bulimia, shopping, and anger management.

His account suggests that the future star was starved for love, his cold father Stanley (Steven Mackintosh) ignoring him and his mother (Bryce Dallas Howard) with her own problems to cope with, the chief being the husband from whom she splits. In one scene, every family member sings a line or two of the song “I Want Love.” The one stabilizing force is his Nan (Gemma Jones) who lives with the family and is on hand to offer the love he so craves from his father.

Once he hears Elvis Presley and receives rock and roll records, his heart is won over and he forms a back-up band called Bluesology that is good enough to play for an African American quartette on their “Soul Tour of England.” Then comes his audition for a manager who might represent him, followed by the recommendation that he collaborate with lyricist Bernie Taupin (Jamie Bell).  That turns out to be one of the most important meetings in his life. Except for one brief period of estrangement, the two men will be song-writing partners and good friends to this day.

During a session with his first manager, he changes his name.  He will also find a new manager in John Reid (Richard Madden), who tells him, “There are moments in a rock star’s life that define who he is. Where there is darkness, there is now you, and it’s going to be a wild ride.” It certainly will be, Reid later entering into a love affair with John. The film does not stint on showing their coupling, though it is brief.

When he stammers to his mother over the phone that he is a homosexual, she calmly replies that she has known for a long time.

Elton’s trip to Los Angeles is historic. He performs at a famous club and is catapulted into overnight, international stardom. In the movie’s version of that legendary performance, the fantasy runs wild. As he plays “Crocodile Rock,” his feet leave the ground and he is connected to earth only by his hands pounding away on the piano. Even the audience levitates a few inches into the air, the scene visually expressing the oft-used phrase that the “music is uplifting.”

In another scene, set in Dodgers Stadium, he sings the signature title song “Rocketman” dressed in a glittery Dodgers baseball uniform and becomes a rocket streaking up into the sky where he explodes like a firework.

Many scenes move from biography to surreal imagery. A suicide attempt at a pool party sends John drifting to the deep end of the pool—only to discover his boyhood self in an astronaut suit singing while playing a toy piano.

“Goodbye Yellow Brick Road” is used to good effect in the scene in which Elton and Bernie break off their friendship for a period. The words and music beautifully capture the heartache of that moment. As stylized as an opera, each song helps us understand the complex, incredibly talented characters and their relationships.

Taron Egerton excellently portrays Elton John, singing the songs himself with great confidence, not trying to imitate the star’s voice. Elton John must have agreed with this, as he served as a co-producer of the film. I expect the actor to be among those nominated for the “Best Actor” Oscar.

The film does not shy away from John’s hedonism and his homosexuality, there being a couple of short coupling scenes between him and John Reid. They keep their relationship from the public so as not to damage Elton’s reputation and thus harm sales. The film’s acceptance of the star’s status will no doubt lead to some criticism in the evangelical press, but John’s long-time advocacy of LGBTQ causes, especially his generous lending of his talent in the fight against AIDs, will please the liberal minded.

The music, of course, is the heart of this film. There are at least a couple dozen by John & Taupin, including “Tiny Dancer,” “Goodbye Yellow Brick Road,” “I’m Still Standing,” “Don’t Let the Sun Go Down on Me,” “Honky Cat,” “Bennie and the Jets,” “Pinball Wizard,”  “Border Song,” “Take Me to the Pilot,”  and “Don’t Let the Sun Go Down on Me.” Being so many, they are not full-length versions. I missed hearing “Candle in the Wind,” but see in the credits that a music-only version is included—so if you favor this haunting song, listen carefully for it. The film comes to a rousing climax with “I’m Still Standing,” which, I have read, roused the Cannes Film Festival crowd to their feet for a long ovation.

Costume designer Julian Day must have had a ball, given all the wild eyeglass frames and outlandish costumes favored by John. At one point Bernie chastises John, “Don’t you want to just sing without this ridiculous paraphernalia?” His partner replies. “People don’t pay to see Reg Dwight! They pay to see ELTON JOHN!” And so, they did, Elton’s get-up sometimes making Liberace seem like a Puritan by comparison.

This will not be for every church group, but for those who believe gays are also acceptable to God, there is much to discuss, and virtually everything to enjoy. Elton John is sometime self-centered and capable of hurting others (though his earlier hedonistic lifestyle hurt himself as much), his story of triumph over the lack of paternal love is an inspiring one.

The story of Elton John's rise to fame from his love-starved boyhood after he partners with Bernie Taupin and at first keeps his homosexuality under wraps.
Editor Rating ★★★★★4.5 out of 5
More Details