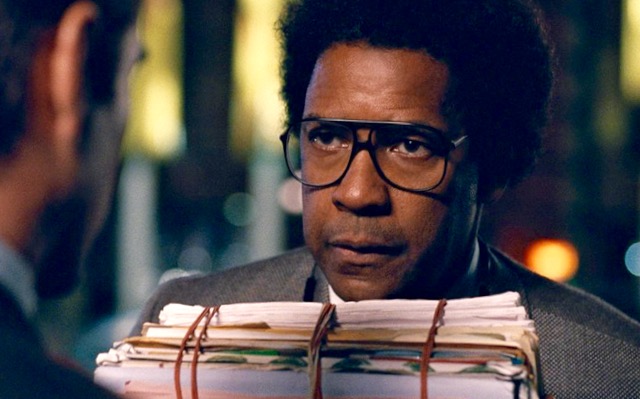 he had no form or majesty that we should look at him,
nothing in his appearance that we should desire him.
He was despised and rejected by others;
a man of suffering[a] and acquainted with infirmity;
and as one from whom others hide their faces
he was despised, and we held him of no account…

But he was wounded for our transgressions,
crushed for our iniquities;
upon him was the punishment that made us whole,
and by his bruises we are healed.

In writer/director Dan Gilroy’s film Denzel Washington steps out of his comfort zone to play a socially awkward lawyer very different from the smooth, confident characters he has often played. His Roman J. Israel is a savant, able to remember long stretches of the law and precedents, but unable to relate to peers or be concerned about his outdated clothing and hair style. He is fixated on justice and civil rights, not fees or prestige, and his courtly manners toward women are misunderstood and resented by female activists of the next generation. In character, and in his effect on another lawyer, however, Roman J. Israel is the embodiment of the suffering servant described by the prophet of ancient Israel—and it is for this reason that I ask that you not join the crowd that has forsaken this fine movie, relegating it so swiftly to the cheap seats theaters.

Israel has been the behind the scenes partner in a two-lawyer firm dedicated to civil rights cases and those in which the law had been used to oppress rather than to help a person. Israel had done all the research and helped hone the strategy, but had never argued a case in court. His legal philosophy is well summed up in his statement, “Each of us is greater than the worst thing we’ve ever done.” He hates the practice of white prosecutors who pile on charges against a young black man so that in the plea-bargaining process, the harried public defender will accept a few lesser charges and forego a trial. The result, a guilty plea, is the same as if the youth had gone to trial: youth who in a courtroom might have been found innocent for lack of solid evidence are saddled with years of prison confinement, their lives forever ruined.

Deeply concerned how the legal system is stacked against black men, Israel has spent a great amount of time working on a brief that he believes will change the whole system, restoring impartial justice to its rightful place. He is so obsessed with this project that he carries the large brief case stuffed with the papers wherever he goes. He lives alone in an apartment filled with books, LP albums, and posters of Angela Davis and Bayard Rustin, icons of activists of the 60’s.

When his partner suffers a stroke and dies, the man’s heir Lynn (Amanda Warren) tells Israel that the family will be closing the unprofitable firm and that he should delay the remaining cases and leave the handling of them to the lawyer accompanying her, George Pierce (Colin Farrell). Unfortunately, Israel decides to go to court with a client where his stubbornness at accepting an unfair ruling leads to an argument with the judge, who slaps a $5000 fine on him for contempt of court. Out of a job, he visits Maya (Carmen Ejogo), head of a non-profit advocacy organization. She has no funds to hire him, but impressed with his activist record, she invites him to speak at the next meeting of her group. This goes so poorly that he walks out in frustration. Maya chases after him, and the way that he handles a situation on the darkened street with a seemingly dead man and the police so impresses her that she later sets up a dinner date so that she can thank him for restoring her commitment to her work for outcasts. (To the filmmaker’s credit, there is no spring/autumn romance between the two.)

Israel has a similar effect on the slick lawyer brought in to close Israel’s old firm. He had rejected George Pierce’s first offer to come work for his prestigious multi-lawyer firm, but accepts a second one because there are no other prospects. Israel’s out of fashion clothing and awkward manners ruffles the feathers of virtually all the other lawyers, but George values his vast knowledge of the law, so he keeps him on.

In dealing with a black murderer Israel succumbs to temptation, calling the victim’s relative and telling him he will give out his privileged information in exchange for the large reward being offered. For a brief time Israel enjoys purchasing and wearing fancy suits, taking a few days off to spend money at Santa Monica, and leasing an expensive high-rise apartment with a spectacular view of Los Angeles—a sad decision that none of his activist idols would have made.

The film affirms that this is a moral universe, despite the inequalities of the U.S. legal system, so Israel pays a steep price for his terrible straying from the right path, even though he repents and tries to right his wrong. That he is very self-aware is seen in his statement, “The real enemies aren’t the ones on the outside, they’re on the inside.”

Despite his sad fate, Israel’s effect on George Pierce is beneficial, perhaps even transformational. Not only does the once unfeeling lawyer set up a special unit in his firm to deal with the kind of pro bona cases that Israel’s old firm had specialized in, he also is the last lawyer we see in the film intent on a mission. He is doing something with Israel’s 1000-page brief that the latter had always wanted to do, but never had possessed the means to do so. It is an exhilarating conclusion to a film that is more of a character study than a courtroom thriller.

I wish I could say that writer/director Dan Gilroy was aware of the Jewish/Christian Scriptures enough that the hero’s last name was intentionally symbolic, but I don’t know this. Be that as it may, in this visual parable the lawyer is a good stand in for the nation that the book of Genesis asserts was called into being by God to become a blessing for all the families of the earth. (See Genesis 12:1-3) After a long history of faithfulness alternating with unfaithfulness, that nation consisting of Abraham’s descendants, known as Israel (he who wrestles with God), is represented in the last portion of the book of Isaiah as the Suffering servant. It was this passage that came to mind when I was reflecting on this lawyer, unattractive in so many ways to his peers (“he had no form or majesty that we should look at him” Isa 53:2a). George Pierce is brought out of his selfish shell (“by his bruises we are healed” Isa. 53:5b) by the man “despised and rejected by others” (Isa 53:3a), even the savant Roman J. Israel, Esq.  Is this reading too much into a film with some plot flaws yet with moral/ethical insights? Maybe—but go and see for yourself. And have fun talking it over with some companions.

This review with a set of discussion questions is in the January issue of Visual Parables.

Though a social misfit the savant R. J. Israel deeply effects a discouraged female activist & turns a slick, shallow lawyer around so that the latter takes up his cause of reform.
Editor Rating ★★★★★5 out of 5
More Details