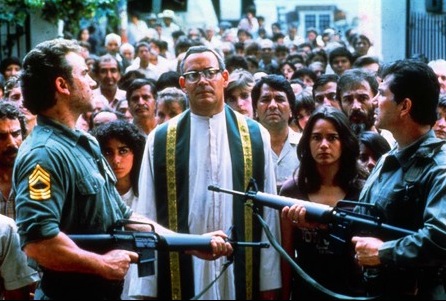 I am bringing this review out of the vault because on October 14 the Vatican is scheduled to declare this Salvadoran bishop a martyr of the faith.  His courageous story is well-told in this film, which is now available at a bargain price from Gateway Films at :  https://webmail.twc.com/do/mail/message/view?msgId=INBOXDELIM46281  Guides for the film (each different) are in two of my books, Films & Faith: Forty Discussion Guides and Praying the Movies: Daily Meditations from Classic Films.

John Duigan’s Romero focuses upon the last three years in the life of Archbishop Oscar Romero of El Salvador. Raised in security amidst books and scholar­ly pur­suits, Oscar Romero (Raul Julia) at first sided with the conservatives of his church against the young radicals who wanted the church to take sides in the struggle between the gov­ernment and the different groups fighting for such reforms as land redistribu­tion.

As the film shows, he was elected to the post of Archbishop of San Salvador with the backing of the conservatives, who thought him a safe candidate who would not rock the boat. They had not counted on his capacity for change, nor on his long-time friendship with the radical priest Rutilio Grande (Richard Jordan). Serving as his friend’s conscience, he seeks to open the eyes of the newly elected archbishop to what is happening to the oppressed people in the countryside.

When Fr. Grande is murdered along with an old man and a boy by a death squad, the Archbishop proposes that all Sunday Masses be canceled except for the memorial Mass to be held at the cathedral. He wants the country unified in their response to the atrocity. Some of the other bishops oppose him, one complaining, “It will be interpreted as a political statement.” Romero understands this, but goes ahead anyway with his plan.

The conservative members of the Bishop’s Council think they can guide him in the “right way,” that is in support of the corrupt government that labels anyone who questions its authority a “Communist.” Especially wary of any change in the position of the new Archbishop is Bishop Estrada (Al Ruscio), a chaplain to the military. He sees no contradiction in his claim to follow Christ and the army which brutalizes the people. He is very upset that Romero is refusing to attend the inauguration of the new president as a sign of protest. If ever there was a “weed in the field” (See Jesus’ parable in Matt. 13:44–52), it is this man who has sold his soul for prestige and power, completely forgetting that he as a bishop is to “feed the sheep.”

Romero is a celebration of the transformation of a man who preferred reading books to wielding power, chatting with friends to standing before a radio mike. But, called to defend his fellow priests from the murderous attacks of their enemies, this very private man be­came a masterful wielder of power and of the medium of radio in the fight for jus­tice.

In the powerful scene in which the Archbishop and the people face down the guns of the soldiers occupying a church he says: “We are here today to retake possession of this church and to strengthen all those whom the enemies of the church put down. You should know that you are not alone, for you are the church. You are the people of God. In the here and now He is crucified in you, just as surely as he was crucified 2000 years ago outside Jerusa­lem. And you should know that your pain and suffering will contribute to El Salvador’s liberation and redemp­tion.” *

In the end Oscar Romero himself will share in the crucifixion of his Lord, shot down in a hospital chapel while lifting up the Host in the Mass.

*Those who have seen the film On the Waterfront might compare this homily to that of the Waterfront Priest’s in the hold of a ship, both of them suffused with an incarnational theology.

This is the story of how Oscar Romero, a conservative ,archbishop is transformed into a crusader for justice when he witnesses the oppression of his people in El Salvador. Raul Julia turns in one of his best performances.
Editor Rating ★★★★★5 out of 5
More Details