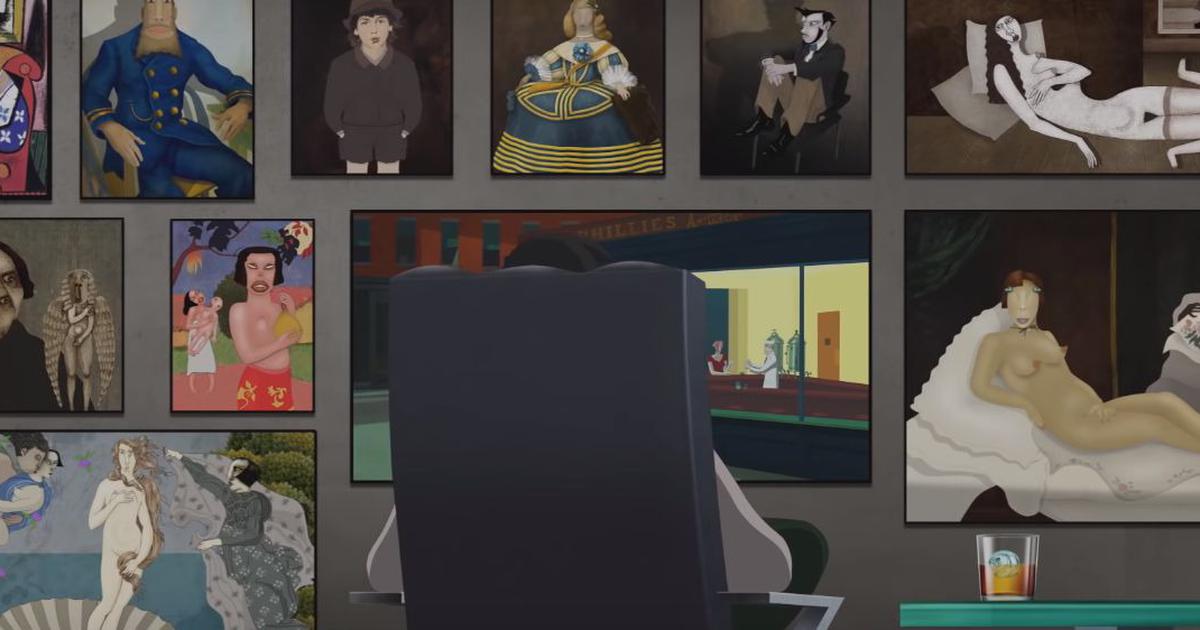 Thieves are not despised who steal only
to satisfy their appetite when they are hungry.

Psychoanalyst Ruben Brandt’s hunger is not physical, but mental and spiritual. He is haunted by nightmares that he longs to get rid of and stealing great paintings he comes to believe is the way to do so. A lover of great art (his name is based on a combination of Rubens and Rembrandt) who uses it to treat his clients, he dreams that certain paintings are trying to kill him. While riding in a train he dreams that the Infanta Margarita, painted by Velázquez has monster teeth that tear into his arm. At other times Venus from Botticelli’s famous painting tries to strangle him with her long hair, throwing him beneath the surface of the water. The black cat in Édouard Manet’s “Olympia” bites Ruben’s face and won’t let go. One of the men in Edward Hopper’s “Nighthawks” slams his face against the all-night diner’s window. Andy Warhol’s “Elvis I & II” challenge him to a gun fight. There are thirteen paintings in all. He can stop the nightmares, he theorizes if he can collect all of them and hang them on the walls of his lavish mansion.

Among his patients are four criminals who agree to help him steal the paintings. A cat burglar named Mimi emerges as their leader. Early in the film she steals a priceless folding fan from a museum and is chased by art-crimes investigator Mike Kowalski through the streets of Paris in a pulse-raising chase that is as exciting as anything in the M.I. or James Bond franchises. We will, of course, see more of him later in the film when he picks up the gang’s trail.

Director /writer Milorad Krstic’s  story is goofy, and in the last part a bit thin, but this is not the primary reason for anyone to see this animated comedy. It is the exquisite detail of the mixture of hand-drawn and computer-generated animation that mimics so well the styles of dozens of artists. Some of the characters could have stepped out of a Picasso work with their cubist bodies and faces sometimes sporting two pair of eyes. There is so much detail in some of the crowd scenes, such as sight gags, that one might want to hit the pause button and back up. One character serves up ice cubes shaped like Alfred Hitchcock.

Kowalski figures that the stolen paintings are too famous to be sold, so they must have been taken by an art collector. The media pick up on this, naming the unknown culprit “The Collector.” Kowalski himself is a collector—of movie memorabilia. His decorated den will be a delight to movie lovers.

I am not as well versed in modern art as I should be, so I am looking forward to getting the DVD and watching it more studiously. There is the “pause’ button, following which I can check out the artist and/or paintings on the Internet. If it comes to your local art house, be sure to go immediately—it played in Cincinnati for just a week or two. In case you missed seeing the R rating, this might be an animated film, but with several gruesome deaths and attacks, it is not for children. But what a treat for adults, whether or not they are up on their art history!

In this animated film a therapist who has nightmares centered around 13 great paintings joins with 4 thieves to steal them for his cure.
Editor Rating ★★★★★4.5 out of 5
More Details