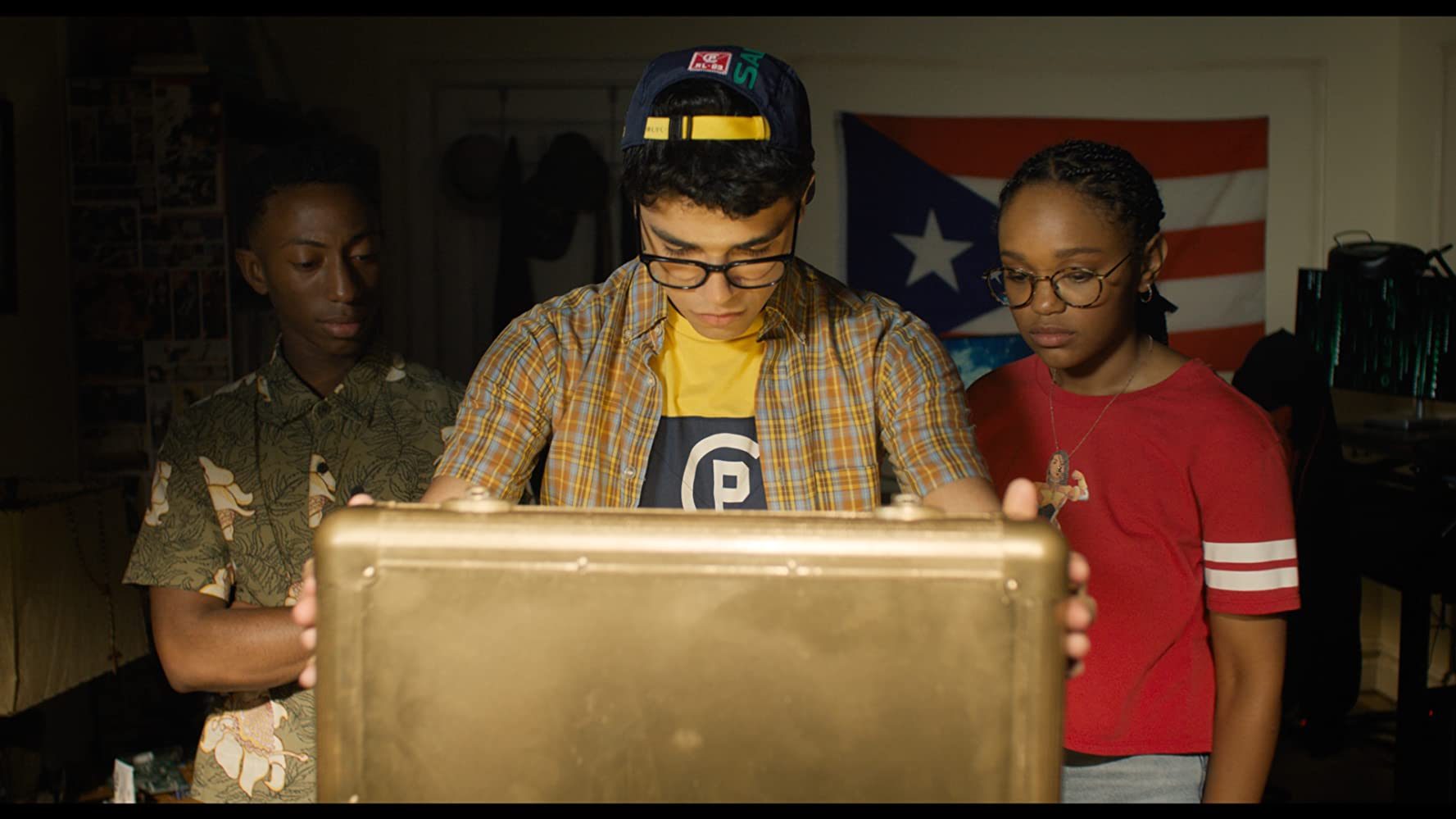 Even when I cry out, ‘Violence!’ I am not answered; I call aloud, but there is no justice.

Then I considered all that my hands had done and the toil I had spent in doing it, and again, all was vanity and a chasing after wind, and there was nothing to be gained under the sun.


Therefore justice is far from us, and righteousness does not reach us; we wait for light, and lo! there is darkness; and for brightness, but we walk in gloom.

This science fiction thriller by first-time director Stefon Bristol and his co-writer Fredrica Bailey boasts Spike Lee as one of its producers. With its ripped-from-the-headlines relevancy in regard to police brutality you might think it was made last week, but it actually was released a little over a year ago when another shooting of a black man by the police was in the headlines. Indeed, its genesis goes back even further when Bristol had made a short film and Spike Lee  helped him to expand it into its present feature length. With many #Black Lives Matter news clips interspersed throughout, the film seems like a mixture of Back to the Future, The Hate You Give and When They See Us.

Claudette “CJ” Walker (Eden Duncan-Smith) and best friend Sebastian Thomas (Danté Crichlow) are East Flatbush teen-age scientific geniuses, Mr. Lockhart, their teacher at their Bronx High School of Science, telling them they are his best students on the last day of class before the summer break. The teacher is played by Michael J. Fox in all too brief a cameo, providing a delightful connection to the earlier time travel film! Only CJ and Sebastian’s desire to travel back and fix a problem is even more serious than Marty McFly’s desire to fix things between his divorced parents. Even the book the science teacher is reading while waiting for the class to end is about time travel, Octavia Butler’s 1979 novel Kindred.

CJ and Sebastian are at the final stages of their science fair project, two time machines in the the form of backpacks stuffed with complicated equipment (no expensive cars transformed into a time machine for these lower two middle class kids—as it is, we set aside for the sake of the story any explanation of how they found the funds for their work). With the success of their project, the two 16-year-olds expect scholarship offers to come pouring in so they can attend the prestigious universities of their choice. Their time travel theory is based on the existence of worm holes and possible alternative universes, the combination of theory, flashy gadgetry, and usual sci-fi  mumbo jumbo sufficing to make what happens believable.

There are enough details of their family lives given to make us care for them. C.J. lives with her widowed mom Phaedra (Marsha Stephanie Blake) and older brother Calvin (Brian “Stro” Bradley). Sis becomes upset with big brother when he intervenes in an ugly confrontation with her former boyfriend, but as we see in a touching kitchen scene where he dries the dishes she is washing, they care deeply about each other. He is proud of her vastly superior intelligence, and she keeps egging him to do more with his life, limited though his prospects are. The two keep alive the memory of their war hero father by Calvin always wearing around his neck his dad’s military dog tags, while C.J. often pins on the purple heart medal given her as a keepsake.

Sebastian is being raised by his Jamaican grandparents Gloria and Nigel (Myra Lucretia Taylor, Ron Bobb Semple)—indeed, the whole neighborhood is filled with immigrants from the Caribbean sporting colorful clothes and flags on display. The teenagers have established their laboratory in the garage of Sebastian’s grandparents, so Gloria is often on hand, her concern about what they are up to leading her often to look in upon them. However, despite her misgivings about what they are doing, her good heart leads her to leave many delicious snacks, and even meals, for them to consume. Even geniuses ned to eat.

After a failed first attempt to travel back a day—the length of time in the past and the duration of their visit being limited respectively to just a day and about ten minutes—the pair eventually succeed. Now both of them are aware of and have discussed the butterfly effect of time travel, but C.J., who has been shown to be impulsive, all too readily giving way to her temper, cannot resist getting back at her former boyfriend when he flaunts his new flame in her presence. The result is a series of changes in the past that cause her beloved brother to be in the wrong place at the wrong time. Two robbers fleeing from a robbery rush past Calvin and a friend. Almost immediately two police officers pull up in a squad car behind the boys. The nervous cops suspect Calvin and friend to be the robbers. After a frantic verbal and physical interchange, one of the cops mistakes Calvin’s cell phone to be a gun. He shoots him.

C.J. is shaken to the core by her brother’s death. The pastor at the funeral service cries out against the injustice, as so many others have through the years. CJ now is determined to repair and expand their backpacks so she can return to yesterday and fix things. The ever more cautious Sebastian tries to warn her but, saying he loved Calvin too, agrees to join her. C.J. and Sebastian’s revisiting the past requires the help of still a third person, Eduardo (Johnathan Nieves). Their packs need more power, and he, though not as brilliant as his two friends, has created for the science fair some kind of a gizmo that can supply it. Eduardo also serves to enrich the diversity of the neighborhood. His family is from Puerto Rico, and thus also a person of color. As was seen in the way that our government treated that island after the devastating hurricane, his status in society is the same as CJ’s and Sebastian’s.

There follows a series of returns to the fatal day, with complications each time leaving them disturbed and dissatisfied. CJ just can control neither her temper nor events. One result even leads to a change of deaths—from Calvin to Sebastian. Thus, what started out in a light vein, laced with a good deal of humor, turns darker and darker, as each time the determined C.J. tries to change some bad effect of her earlier travels into the past and something unexpected happens to spoil the outcome. The two constant in the various scenarios are injustice and death.

People of faith will find in this film the same thirst for justice that motivated such prophets as Isaiah and the writer of Job. A concern not for the justice of humans and their systems, but also for the seemingly unjust deaths that steal the lives of the innocent. Whether this can be changed or not—some might say “tamper with”—no one prove by quoting Scripture. Written by different men and women over a long period of time, the Bible teaches both predestination and free will. CJ obviously would side with the latter, she being a thoroughly modern person who believes that with science we can fix anything. Sebastian seems less certain, more traditional in his view, and thus he gives up—maybe he should have more of his friend’s persistance? Plenty to discuss here! The teens freely use a lot of profanity in expressing themselves (this would be an R-rated film in theaters), so I hope that religious groups will not shy away from it! Any leader planning to use it should give ample warning of the language. Fortunately, in this respect, there is no sex, CJ and Sebastian being friends who bond upon an intellectual basis only.

The film’s abrupt ending is very much open to interpretation. To some it will be far too abrupt, leaving them with a “What the…?” To some the ending will suggest that the film is mainly a cautionary one—don’t fool with Mother Nature, or you’ll be sorry. To others, especially black viewers, the film is evidence of the inevitability of some black male being killed by the police in a racist society no matter what one does. Or, if you are more optimistic, the film might be seen as a tribute to persistence, C.J., like that widow in Jesus’ parable that I have referred in numerous reviews, who keeps pestering the unjust judge trying to ignore her, until at last he agrees to hear her case. This latter possibility reminds me of the fantasy film Groundhog Day, in which the protagonist has to keep repeating living the same day over and over until he changes from his usual self-centered ways and gets things right.

Whatever your interpretation, this is an ingenious film worthy of your time. Stefon Bristol provides an all too rare glimpse of wholesome, nourishing families of people of color, plus a female heroine blessed with brains played skillfully by the charming Eden Duncan-Smith. Let us hope we will see more of the actress and director in the near future. The details of families and community in mourning take us behind the headlines proclaiming another black life victimized by the brutality of racist cops. And even the way the two policemen are shown in the recurring scene of the shooting does not depicted them as monsters, but as two scared men reacting to a subculture completely alien to them.

The film will leave you with much to think about. Another possible view of the ending is suggested by the filmmaker himself when he said that he wants viewers to come up with their own ending. “I didn’t want the film to be wrapped up in a bow.” This comment reminds me of my what my favorite Italian filmmaker said in an interview. Federico Fellini said, “My films never have what is called a final scene. The story never reaches a conclusion…My films, on the contrary,  give the audience a very precise sense of responsibility…If films like La strada, I vitelloni, and Il bidone leave the audience with the spectator moved and slightly ill at ease, then they have attained their goal.”* Thus, we may well see this film as a call to us, who are moving time-wise into the future (the opposite of the persistent C.J. in that last scene) to be as equally determined to change that future, to replace the past and present in which black lives do not matter with one in which they do matter, just as much as the life of a white person–a future more attuned to what Dr. King called “The beloved community.”

* Pg. 108, Federico FELLINI: An Investigation into his films and philosophy by Gilbert Salachas: Crown Publishers, NY, 1963.)

This review will be in the July  issue of VP along with a set of questions for reflection and/or discussion. If you have found reviews on this site helpful, please consider purchasing a subscription or individual issue in The Store.

This sci-fi film in which 2 teenagers of color try to change a tragedy by inventing time machines & traveling back a day is set amidst the Black Lives Matter protests.
Editor Rating ★★★★★5 out of 5
More Details