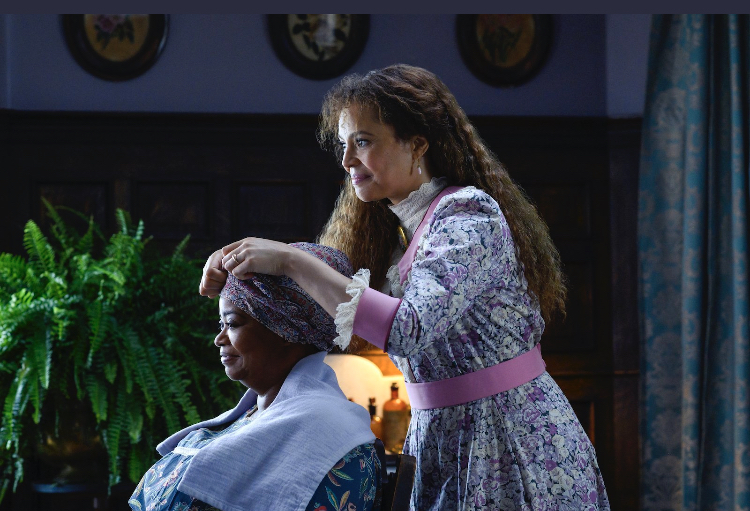 
Desire then that in every place the men should pray, lifting holy hands without anger or quarreling;  also that women should adorn themselves modestly and sensibly in seemly apparel, not with braided hair or gold or pearls or costly attire but by good deeds, as befits women who profess religion.


“Sisters, sisters! Let’s talk about hair. Hair can be freedom or bondage. The choice is yours.”

The early Apostles would probably have dismissed Madame C.J. Walker’s business as frivolous, and thus unworthy—until possibly they learned how important to their well being was the hair of African American women. Sarah Breedlove, who later adopted the name Madam C.J. Walker certainly did, as evidenced by the above quote from the new Netflix miniseries Self Made: Inspired by the Life of Madam C.J. Walker. Although based on the book written by her great-great-granddaughter, A’Lelia Bundles On Her Own Ground: The Life and Times of Madam C.J. Walker, I suspect the film contains as much fiction as fact, based on my brief research.* Nonetheless, thanks to the fine performance of Octavia Spencer and her supporting cast, this is a very entertaining film. Madam C.J. Walker, well known to black Americans, is less familiar to the rest of us, but should be, due to her being one of the first black females who raised herself to the status of one of America’s first black woman millionaires.

Sarah was the last of a large brood of children, her siblings born as slaves in Louisiana, but she, arriving four years after Lincoln’s 1863 Emancipation Proclamation, born free. Inserted throughout the four segments are brief flashbacks to her days as a child in a field picking cotton. Orphaned at a young age, she lived in Vicksburg with a sister and then at the age of 14 married a man names Moses to escape from her predatory brother-in-law. Sarah was 20 when Moses died, but they had produced a daughter A’Lelia, who will figure prominently in all four segments. She married John Davis in 1894 but left him in 1903—none of this being included in the film when we find her working as an independent laundress in St. Louis. Thus, the film’s Charles Joseph Walker is her third husband, with a background in selling newspaper advertising.

Addie, portrayed by Carmen Ejogo, is one of Sarah’s customers. Depicted as a haughty light-skinned mulatto, Addie is a stand-in for the real Annie Malone,* for whom Sarah did work when she lived in Denver (not St. Louis, as in the movie, and Sarah was not her laundress but operator of a store in which she sold Annie Malone’s hair products—so much for historical veracity!). It seems unfortunate that Annie, who deserves her own movie because of her many accomplishments (she, not Madame, being the first black millionaire), is made into a ruthless, conniving villain in this film, but apparently this is another unfortunate case of the scriptwriters giving in to the need for dramatic conflict over historic veracity. I suspect the people of St. Louis, where an annual Annie Malone parade in support of children’s charities takes place, will not be pleased with this series! Sad that one African American woman must be built up by tearing down the reputation of another!

In the film Addie takes pity on her laundress’s hair loss problem, giving Sarah personal treatments when she drops off and picks up her laundry. The treatments are successful because the black entrepreneur had been a good student of chemistry, her formula replacing the animal fat and lye that black women had been using. However, when the ambitious Sarah asks to become a saleswoman, Addie refuses, telling her she does not fit the type of employee that will appeal to the public—meaning that she was too dark and not beautiful. Even when Sarah “borrows” twenty tins of product, sells them, and turns over the money, Addie refuses to hire her, angrily dismissing her instead.

This will be an important theme throughout the film, the ideal female beauty pictured in magazines and newspapers versus the looks of the ordinary woman. Later Sarah will reject  her husband C.J.’s proposal of featuring images of the ideal black woman for their ad campaigns—as we see, his drawings are merely the slim Gibson Girl with just a slightly darker skin. Throughout her career, Madame C.J. Walker, which she adopts as her business name, affirms that she wants to make every black women feel beautiful and worthy.

How Walker experiments, improves upon Addie’s formula, and ultimately succeeds in building her business, including a small factory that she sets up when the family moves to Indianapolis, makes for fascinating viewing. She employs black women to sell her products door to door, much as Avon and Mary Kay do. She thus enables hundreds of women to rise out of poverty and have more control over their lives.  Along with her factory  employees (she has up to 10,000 on her payroll) are daughter Lelia (Tiffany Haddish), and her loyal legal adviser Ransom (Kevin Carroll). Also, her father-in-law Cleophus, played humorously by the scene-stealing Garret Morris. Of course, there is also C.J., but eventually he betrays his wife with another woman and afterwards seeking a divorce.

C.J. (Blair Underwood) proves helpful at the beginning by his steady encouragement of his wife during her early struggling days when she has self doubts. The film honestly shows Madame’s shortcomings in her inability to see and understand his wounded pride when she continually rebuffs his suggestions, most justifiably so as in the case of his black Gibson Girl campaign, and her insistence on always referring to “My” company or business. The latter of course, is her reaction to the prevailing patriarchal view that a woman’s place was in the kitchen, not heading up a business. This antiquated view is shown most tellingly when world famous Booker T. Washington (Roger Guenveur Smith) admonishes her for speaking out at a black business convention over which he has been presiding, bluntly telling her a woman has no place in business. On the other hand, later on we see his equally famous critic and rival W.E.B. Du Bois (Cornelius Smith, Jr.) support and befriend her when she moves to New York City.

The strained relationship between Madame and her strong-willed daughter is well depicted, though some of the details have been objected to, namely that Lelia had a lesbian relationship with a female photographer who threatened to lure her away from her mother and the business. There is a mother-daughter reconciliation (though not a husband-wife one), Lelia becoming president of the company after her mother died in 1929—and Wikipedia’s biography of Lelia states:

“Lelia would be dubbed “The Joy Goddess of Harlem’s 1920s” by famed poet Langston Hughes because of the crucial role she played in creating a safe space for queer artists during the Harlem Renaissance. While history may not remember Lelia’s business acumen kindly, it would simply be a disservice to fail to acknowledge the important creative, sexual, and emotional connections built at the Walker residence, Villa Lewaro, and Lelia’s Manhattan salon, The Dark Tower. These relationships likely forged and shaped the arts and letters culture of one of the most pivotal periods in American history.”

So maybe the scriptwriters are on more solid ground at this point than at other points.

Apparently to avoid the criticism that this is just like other biographical films, the writers add some strange visual metaphors and even some song and dance fantasies that supposedly spice up a naturalistic scene The dancers and singers come and go with scarcely a break in the scene. The heaviest visual metaphor is in the first episode entitled “The Fight of the Century.” It features a box-gloved Madame in a prize-fight ring, later joined by her opponent, the similarly equipped Addie. Also inserted into the episode is “The Fight of the Century” in which the black “Jack” Johnson decisively beat the white James Jefferies. There was no radio in 1910, so the folks at the factory instead gather around a ticker tape machine as Cleophus reads aloud the words of the telegraphed description. And yes, the white racist riots mentioned as breaking out over the country did indeed happen.

A refreshing touch to this mostly black-cast series is that both Madame and Addie rose to success on their own. There is no kindly white person who comes to their aid. The only time we see whites is when Madame is wooing them to invest in her factory or to sell her product in their stores—and one of these attempts is spoiled when her drunken husband shows up with his demands while Madame is conducting the whites on a tour of her factory. The series title truly represents Madame and Addie’s achievements. The oppressive white society is out there, but Madame and her family operate largely in the black communities of St. Louis, Indianapolis, and Harlem with little intercourse with whites.

I especially enjoyed the series because I grew up in Indianapolis, basically at the time a Deep South town without the segregationist signs. As my father and friends often remarked about subservient blacks, “They know their place,” so the city was as racially divided as Birmingham. (I wondered as a child why I didn’t see any “colored kids” at Riverside Amusement Park.) I remember when going downtown I would look up Indiana Avenue—the main commercial artery of the black community—and see the huge Walker Theater neon sign atop the Walker Building a few blocks away. I never ventured up the Avenue to see it—it was a “No Go” street for white kids—though, come to think of it, I do recall riding up the Avenue once and gawking out the window at all the black folk out shopping or strolling. It felt like we were venturing into a foreign country. Nor did I know anything about the Madam C. J. Walker Manufacturing Company once headquartered there. For over five years I was a stock clerk and cashier at Standard Grocery, but never put up any of the Madame’s products in the cosmetic section—we had no black customers in the suburb of Broad Ripple, and probably would not have carried them if we did.

And so, the series comes as a revelation to me. It serves as both a celebration of the entrepreneurship of black persons and as an example of a strong female’s overcoming of sexism. Both Madame C.J. Walker and her real-life rival became wealthy businesswomen at a time when their peers were expected to stay home and serve as cooks and baby factories, and both became generous philanthropists benefiting thousands of their fellow citizens. Do go on line and watch this fascinating series!

* For  Annie Malone’s  bio go to the Wikipedia article.

Also for a bio on Madame Walker go to Wikipedia. There is also a bio on Lelia.

This 4-part Neflix series chronicles the rise of Madame C.J. Walker from laundress to sales woman to the head of a national cosmetics business.
Editor Rating ★★★★★4 out of 5
More Details