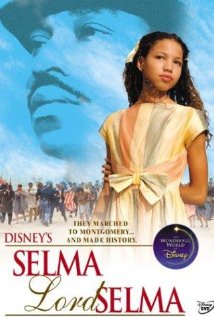 A Film Guide for MLK Celebration

Suitable for children, this TV film was a part of The Wonderful World of Disney series, first aired in 1999. The guide appeared in the March 2001 issue of VP, when we ran just one guide per issue. 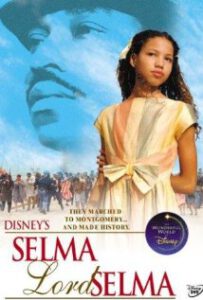 Screenplay by Cynthia Whitcomb, based on the book by Sheyann Webb & Rachel West Nelson, told to Frank Sikora.

Although Selma and the famous Selma to Montgomery March led by Dr. Martin Luther King, Jr. and Hosea Williams in 1965, will forever be associated with the vicious violence visited upon the marchers, the producers have managed to recreate the events leading up to the March with few scenes that overtly show the violence. The story is told through the eyes of the “almost twelve” girl Sheyann Webb, so that young viewers will find much to hold their interest. Like Shy, as she is called, many of them have been told, when they take an interest in such adult affairs as civil rights, “You’re too young to understand all this.” That’s what Shy’s parents tell her after she skips school to meet her just arrived in town hero Dr. King. Ironically they try to discourage her from taking part in the Freedom Meetings at Brown Chapel, whereas her next-door friend Rachel is reluctant to go to the Freedom meetings or to march, even though her parents are such enthusiastic supporters of the Movement that they open up their home to a young white seminarian Jonathan Daniels.

New Hampshiran Jonathan comes to town to answer the call for volunteers the same day that Shy meets Dr. King. Young and enthusiastic, Jonathan becomes a good friend to Shy and a faithful voter registration advocate. He also runs up against resistance from a fellow Anglican clergyman who tells him that outsiders like Jonathan do not understand the South and are merely stirring up trouble among “the colored” who do not really want to vote. At a Freedom meeting Jonathan is introduced to Jimmy Lee Jackson and Willie, both about his age but already veterans in the Movement. Because Jonathan has a car, an old VW Beetle, they accompany him to the countryside where the Northerner soon learns about the fear of powerless blacks and the intransigence of white segregationists. Indeed, even before this, Jonathan confronts this when he comes upon a group of hooded Klansmen setting fire to a cross on the lawn of Brown Chapel.

A delightful touch to the film is the presence of a daughter of Dr. King, Yolanda King, who portrays Miss Bright, the girls’ school teacher. She represents those blacks who had struggled to gain an education and thus rose to the top of black society. Like Miss Bright, many of them were reluctant to join the civil rights campaigns because they had so much to lose to vindictive segregationists who controlled everything in their communities, including the school boards. But, inspired by her young pupil, Miss Bright and her fellow teachers do decide to leave their safe classrooms and join the dangerous March, a decision that will cost most of them their jobs.

The rest of the ensemble cast is excellent: Jurnee Smollett (the talented young actress who played the lead  in “Eve’s Bayou”) as Sheyann; Mackenzie Astin as the seminary student Jonathan Daniels; Clifton Powell as a more introspective Dr. MLK, Jr., than is usually shown; and Brett Rice, who portrays Sheriff Pots, despite the actor’s own convictions.

As with all teleplays, script writer Cynthia Whitcomb, who based her work on the book written by the two girls, now grown to adulthood, simplifies history and condenses many of the historical characters for the sake of producing a comprehensible drama. She retains, however, the essence of the times, as I can testify, having participated myself for a brief summer in voter registration work in Mississippi. The feeling of terror experienced by all participants, especially that of black workers living in the countryside where they were so vulnerable to the threats of the KKK, is well conveyed. But so is the courage of those who overcame their fears and decided that change was long overdue and would never come unless they “put on their marching shoes.”

That the Movement was a singing one is wonderfully shown, numerous songs such as “Ain’t Gonna Let Nobody Turn Me Round,” “O Freedom,”  “This Little Light of Mine” and others sung at gatherings and in the streets of Selma as the people march.

I have already mentioned that Dr. King is shown as a more introspective person than his fiery public image would suggest. Several times he is shown warning his co-leaders that they are up against a far greater and more entrenched evil system than they realize. He worries about the effect upon those whom they are calling to undertake such great risks to their families, their careers, and even their lives. His insistence upon the importance of non-violence is emphasized, not only in the brief snatches of his sermons that we hear, but also in a debate about tactics and the role of God between Jonathan and Willie.

I felt anew the thrill of watching again President Lyndon Johnson’s famous televised speech in which he affirmed that the might of the federal government at last would come down on the side of the marchers and their goal of a voting rights act.  That the terrorists in the Klan meant business is depicted in the two murders, only one of which takes place on screen. Thus the film is a good reminder that the progress that the Selma March  won has been bought with blood, as has been the case in virtually all advances for freedom. “Selma Lord Selma” is good family entertainment, and a fitting tribute to those who risked so much for the better world that Dr. King was eventually to die for.

Some of the questions have been set at a level appropriate for an intergenerational group. Those leading an adult or youth group in discussing the film can rephrase or skip many of these .

– Dr. King speaking at Jimmy Lee Jackson’s funeral, followed by the scene in the study when he   tells Shy it would be hard for him to keep his faith if his daughter had been killed.

– Willy and Jonathan talking about Jimmy Lee’s murder, and Willy saying that people are                changing their minds about non-violence. What is Jonathan’s reply?