Look and see if there is any sorrow like my sorrow… 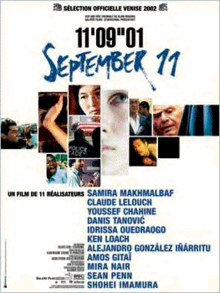 French producer Alain Brigand’s film did not do well when it came out in 2002. Not because it was lacking in quality, most observers believe, but probably because just a year had passed since the twin towers were attacked on 9/11. The horror and the pain were too raw. But now, a decade and a half later, is a good time to catch up with this amazing anthology if, like me, you missed its brief run in 2002. Mr. Brigand selected 11 different directors from around the world to contribute a short film, thus providing a global perspective on the event. He specified that the films be 11 minutes, 9 seconds, and one frame in length.

In Iranian filmmaker Samira Mahmalbaf’s opening story a group of refugees from Afghanistan are busy drawing water from a well and mixing it with mud to make bricks for a shelter while the local teacher comments that these will not protect them from America’s atom bomb. Calling the children to leave their work, she asks if they know what has just happened in America. No one does, though the children do know about an accident at the well in which two adults died and another was injured. She explains that many Americans have died in the attack on the twin towers in New York and calls for a moment of silence to honor the dead. The chatty children talk instead about God and the two local people who died. Seeing they do not comprehend even what a tower is, she takes them outside and tells them to stare up at the massive smokestack of the kiln and imagine it to be one of the American towers. The smoke curls out of its top, reminding us of that which arose from the twin towers on that horrific day.

France’s Claude Lelouch’s story takes place in a Manhattan apartment where a deaf mute French photographer is despondent about her relationship with the American tour guide she has become involved with. She sits at the kitchen table typing on her laptop a farewell letter to him. She cannot see the turned-on TV that shows the two planes flying into the twin towers. Finishing her good-bye letter, she is about to leave when her boyfriend returns—and what she sees covering his face no doubt will shock her into reconsidering her decision.

Egypt’s Yousesef Chahine’s thought-provoking (almost) diatribe challenges Americans to see their tragedy in the context of the thousands of lives its soldiers have destroyed in its far-flung wars during the past 40 years. It begins with the Egyptian director canceling the press conference about his new movie because he thinks it is too trivial compared to the news about the twin towers. He then has a dialogue/debate with one of the 146 U.S. Marines killed in Beirut in 1983 by terrorists who blew up themselves and the barracks, his conclusion being that war and violence are “a vicious circle of destructive stupidity.”

Danis Tanovic of Bossnia-Herzegovina’s story is about Selma, a woman who hears on a small radio the news of the attack. Despite the opinion of others that the demonstration by widows in honor of those who lost their lives in the 1995 Srebrenica massacre should be canceled, she is determined to go to the square to join the other women. As she joins what turns out to be a very long line of protestors against violence, there is the comment that this is “for them (the Americans) and for us.” To demonstrate against a particular act of violence is to demonstrate against it wherever it occurs.

Idrissa Ouedraogo, from Burkina Faso, mixes humor and pathos in his story about a poor village boy with a sick mother. They do not have the money to fill the prescription, so she lingers between life and death. Then he spots in the market an imam who looks like Osama bin Laden. He gathers his friends together, telling them not to reveal his secret to adults because they would spend the reward money on cars and cigarettes, whereas he needs it for his mother. They form a posse armed with crude spears and set out to stalk and capture their prey.

Ken Loach of the United Kingdom also wants Americans to see their tragedy in a larger than usual perspective by showing Pablo (Vladimir Vega), an exiled Chilean singer-songwriter in London writing a letter to the relatives of the twin tower victims: “Mothers, fathers and loved ones of those who died in New York, soon will be the 29th anniversary of our Tuesday, 11th of September and the first anniversary of yours. We will remember you. I hope you will remember us…” It was on the same day in 1973 that Chilean President Allende was overthrown in a plot funded by the CIA. This segment is filled with newsreel shots of Allende, Chilean soldiers, bodies of the “disappeared ones,” and most galling of all, of Sec. of State Henry Kissinger’s 1974 visit with the man he helped put in power, the ruthless dictator Pinochet, who murdered at least 30,000 of his own people.

The filmmaker now as well known in the U.S. as in his native Mexico, Alejandro Gonzalez Inarritu, keeps the screen in darkness for most of his 11 minutes. We hear the chanting of prayers for the dead by Chamulas Indians, a myriad voices, including a portion of a phone call made by a woman aboard one of the doomed planes. Brief clips of the towers appear intermittently in which we see human bodies falling. (These have been criticized by some as inappropriate.) It takes a while to realize that the thuds we hear are caused by those bodies hitting the ground, and that the crashing noise is that of one floor after another falling into the other. The filmmaker’s use of darkness forces us to use our imagination, as does the final frame reach out to our minds. The still shot includes a question, first in Arabic and then dissolving into English, “Does God’s light guide us or blind us?” A very good question, calling us to reflect how religion is like a two-edged sword that can be used for good or evil.

Israel’s Amos Gitai shows a female Israeli TV journalist at the scene of a terrorist bombing in Jerusalem frustrated that her studio is refusing to carry her report live. She is so upset that she cannot accept her boss’s explanation that she has been pre-empted by an even bigger story—the attack on the twin towers.

India’s Mia Nair based her film on the true story of a Pakistani-American mother in New York whose grown son is missing at the end of September 11. He had left that morning to attend a med school class, but had not returned or contacted her. When rumors surface that he was one of the terrorists, she suffers from the anti-Muslim paranoia rampant at the time. Then the truth comes out that changes everything. It also demonstrates the danger of prejudice that is still all too widespread.

Sean Penn, working behind the camera this time, tells the story of a lonely old man lost in grief over the death of his wife. His small apartment is dark, the only decoration being a bouquet of dead flowers. Suddenly the room is lighted up by the twin tower explosions, and magically the flowers come to life again. Is he saying that death brings life, or…?

The last film by Japan’s Shohei Imamura, perhaps the most bizarre of all, is about a WW 2 Japanese soldier so traumatized by the violence of war that he believes he is a snake. He slithers around the woods and village on his stomach. I was puzzled by this tale set back in the 1940s, but the filmmaker apparently wants us to link 9-11 with all campaigns of violence, from Japan’s imperial wars to that of the Taliban in the 21st century. As a pawn in Japan’s attempt to expand its rule through war, the soldier, like the Arab terrorists, needs to learn the truth of the statement closing the film, “There is no such thing as a holy war.”

Like others who have viewed the films, you will find they are uneven in quality and depth of approach. However, the collection as a whole can help us see our own tragedy in a wider perspective, and especially wrestle with the question of why do “they” hate us so much. We all know that our nation has done a lot of good around the world, but some of the makers of these films remind us that we have also supported evil as well, especially during the Cold War period when our almost paranoid fear of Communism led us to commit anti-democratic acts.

Several of the films could be skipped over, but I especially recommend that you watch and discuss the ones by Yousesef Chahine and Ken Loach. Just as the prophet Jeremiah called on his nation to face up to its sins, so these two filmmakers can help us search honestly for the reasons why we are not regarded as the defenders of freedom but a major threat to it. Also Mia Nair’s true story should sensitize us to the effects of Islamaphobia so that we will maintain the freedom of all Americans. So, if you have already commemorated 9/11 by watching World Trade Center or Flight 93, check this one out.

This collection of 11 short films by 11 directors from around the world was created to show how differently people reacted to the horrible events of 9/11.
Editor Rating ★★★★★4 out of 5
More Details