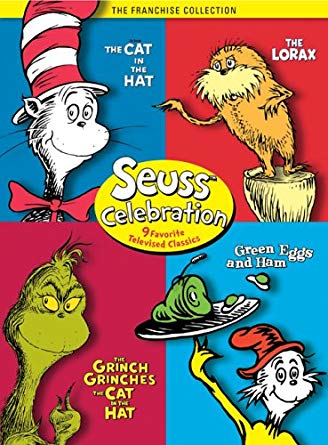 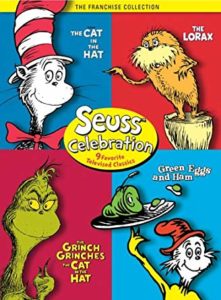 Want to see more of Mr. Grinch? Two of the nine half-hour TV films of this disk feature this grim-faced character:

“Grinch Night” and “The Grinch Grinches the Cat in the Hat.” Max, the Grinch’s long-suffering canine servant is also featured. These two episodes alone make this disk worth adding to the collection of parents and those working with young children.

Preachers and teachers will also want to explore with children the seven other short films, especially “The Lorax,” “Sneetches,” and “Zax.” In addition, there is the laugh-inducing “Cat in the Hat,” “Pontofell Pock and His Magic Piano,” “Green Eggs and Ham,” and “The Hoober-Bloob Highway.” Quite a little visual parable library in itself! More on these in a later VP.

“Grinch Night,” which has been called a prequel to “How the Grinch Stole Christmas,” takes place on Halloween night. Our sourpuss is again upset by the Whos and thus intends to unleash some of the horrors of his Paraphernalia Wagon on the Whos, but a Who named Euchariah is able to thwart his dastardly plan,

“The Grinch Grinches the Cat in the Hat” pits our favorite grouch against a popular hero when the Grinch cannot get around the Cat in the Hat’s car blocking his way while the latter is picnicking. The Grinch develops some fantastically ridiculous gadgets to attack his enemy, but the Cat in the Hat fights back with a Gandhian tactic that should warm the hearts of peacemakers working with children.

This is another children’s DVD that is more than just jolly entertainment. Lots of teaching possibilities for those with the imagination and a love of children.

Released over ten years ago, the DVD is available from Amazon, and probably is in the collection of your local library. Also, one or more of the shorts are available on YouTube.

A collection of 9 short TV Dr. Seuss stories, including 2 about the Grinch.
Editor Rating ★★★★★5 out of 5