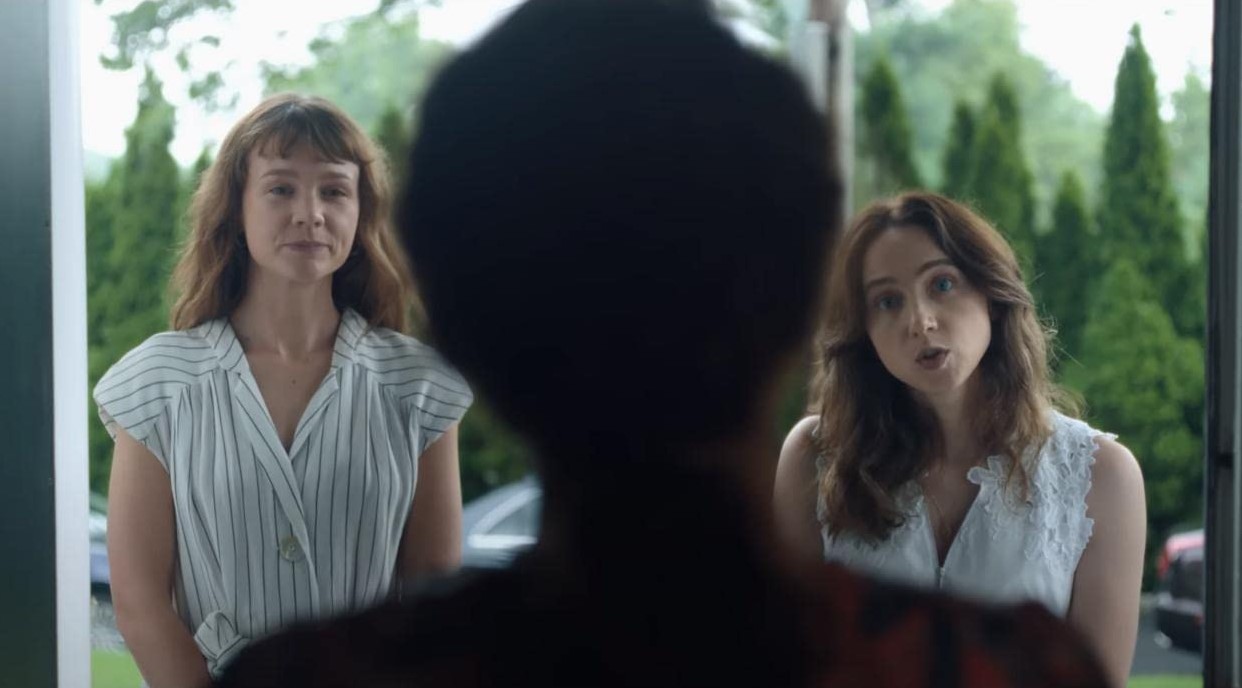 Then Jesus told them a parable about their need to pray always and not to lose heart. He said, “In a certain city there was a judge who neither feared God nor had respect for people. In that city there was a widow who kept coming to him and saying, ‘Grant me justice against my accuser.’ For a while he refused, but later he said to himself, ‘Though I have no fear of God and no respect for anyone, yet because this widow keeps bothering me, I will grant her justice, so that she may not wear me out by continually coming.’

If ever one doubted the importance of a free press, this film centering on two NY Times reporters should be invoked! Director Maria Schrader has given us a visual parable about two women who proved to be even more persistent than the rebuffed widow in Jesus’ parable. Megan Twohey (Carey Mulligan) and Jodi Kantor (Zoe Kazan), assigned to research and write an article about serial woman abuser Harvey Weinstein kept running up against slammed doors and telephone hang-ups when they approached women reportedly victimized by the Hollywood mogul.

Just as some banks and financial institutions during the Bush recession were considered too big to fail, so Harvey Weinstein was such a big name in Hollywood that for far too many decades he could abuse actresses and Miramax assistants without fear of exposure. After all, his name filled the papers during the months leading up to the announcement of the Oscar nominations,– his films were nominated for 341 awards and won 81.

Jodi Kantor (Zoe Kazan), an investigative journalist explores a tip that Weinstein sexually abused actress Rose McGowan in 1997. She speaks with Gwyneth Paltrow and Ashley Judd about their experiences at Miramax, but, they refuse to go on record. His retribution could wreck their careers. Kantor talks with fellow reporter Megan Twohey (Carey Mulligan), and the two join forces. Rumors about Weinstein’s despicable behavior produce many names that send them to their phones or to the doorsteps of numerous women. They learn a few details, such as the many settlements with the always present NDA. Millions of dollars have been spent to cover up the slime bucket’s trail.

Backing the pair of reporters are their bosses at the NYT’s office, Assistant Managing Editor Rebecca Corbett (Patricia Clarkson) and Executive Editor Dean Baquet (Andre Braugher). As a few women finally agree to come forward, there is a scene when Baquet takes phone call from Weinstein, calmly talks with the culprit, and then hangs up on him. Some viewers will fondly recall Jason Robard’s Ben Bradlee in All the President’s Men, the brave editor of The Washington Post who supported reporters Carl Bernstein and Robert Woodward. As publication of the article draws near, Weinstein continues to refuse to admit to any wrongdoing and issue threats.

The excellent script, adapted by Rebecca Lenkiewicz from the two reporters’ book, takes us into the home life of the two women, reminding us that they are wives and mothers as well. They are caring human being who see their story as more than just a take down of a Hollywood notable, but rather as the removal of a moral monster who has ruined the lives of an incredibly large number of talented women. Though not going to the length of re-enacting the abuses, one scene shot in the empty hall of a hotel is accompanied by a recording of Weinstein cajoling a young woman to touch him inappropriately—this is more chilling than any re-enactment could have been! After the Times’ publication of the story in October 2017, more than 80 women, finding courage in numbers, came out with accusations against the abuser.

The already mentioned cast members are excellent in their depictions—yes, this could be called an ensemble cast film, with several stars such as Samantha Morton and Angela Yeoh playing informants. Although we hear Weinstein’s angry voice, we see him only from the back in one scene, actor Mike Houston having that unenviable role. Ashley Judd plays herself, one of the victims.

The importance of this story cannot be overstated. Weinstein and his ilk had been protected by the powerful (such as the publisher of The National Enquirer). Because Weinstein’s take down was culture changing, this is truly a movie that matters.

Two NYT reporters, investigating tales of abuse by Harvey Weinstein, will not give up, even when most women are too afraid to talk.
Editor Rating ★★★★★4.5 out of 5
More Details