Even though a person sins and gets by with it hundreds of times throughout a long life, I’m still convinced that the good life is reserved for the person who fears God, who lives reverently in his presence, and that the evil person will not experience a “good” life. No matter how many days he lives, they’ll all be as flat and colorless as a shadow—because he doesn’t fear God.
Ecclesiastes 8:11-13 The Message

Transgression speaks to the wicked
deep in their hearts;
there is no fear of God before their eyes.
For they flatter themselves in their own eyes
that their iniquity cannot be found out and hated.
The words of their mouths are mischief and deceit;
they have ceased to act wisely and do good.
They plot mischief while on their beds;
they are set on a way that is not good;
they do not reject evil.
Psalm 36:14 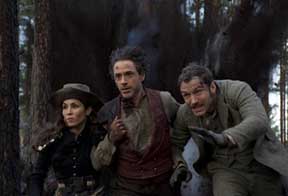 Holmes and companions flee while being bombarded by cannons.
© 2011 Warner Brothers

Purists might be even more upset by all the anachronisms in this second computer effects-driven film of Arthur Conan Doyle’s super sleuth played again by Robert Downey Jr., but action fans, meaning the majority of young adults, have taken so to the film that it was the top drawing film during the weekend of its release.
The fast-paced plot involves our martial arts hero and his newly married associate trying to thwart the evil Prof. Moriarty (Jared Harris) from starting World War One 23 years early. A noted Oxford professor, Prof. Moriarty apparently is very wealthy, as he has been busy buying up weapons and munitions factories all over Europe. Beginning with the assassination of a crown prince, Moriarty hopes to poison relationships between the major nations so that they will go to war, thus enriching him even further. “War on an industrial scale is inevitable,” he says to Holmes. “All I have to do is wait.”
The evil villain boldly tells Holmes that he will strike at him through his friend and confidante Dr. Watson (Jude law), who is getting married. What turns out to be the briefest and strangest honeymoon (until you see Melancholia) is an exciting sequence involving Holmes’ pushing the bride out of a speeding train as it speeds across a bridge high above a river.

A number of new characters are introduced, such as Stephen Fry as Holmes well connected brother and Noomi Rapace (star of the original Girl With the Dragon Tattoo) as a gypsy whose compatriots are involved in revolutions. But Downey and Law remain at the heart of the film, the two interacting well as they exchange remarks and put downs. A few delightful examples: Watson, near the beginning of the film, “Oh, how I’ve missed you, Holmes.” The reply,” Have you? I’ve barely noticed your absence.” Or, Holmes, “Get that out of my face.” Watson, “It’s not in your face; it’s in my hand.” Get what’s in your hand out of my face!” And when Holmes appears on a train dressed as a woman, Watson expresses surprise, “What?” to which Holmes replies, “I agree, it’s not my best disguise.”

This is a fun, escapist film that nonetheless upholds the age-old battle of Good against Evil. Holmes is a very flawed hero, overly rational, rude, under appreciative of his loyal friend, and even arrogant, but at least he is on the right side.

A version with discussion questions will soon be available to VP subscribers at visualparables.net..