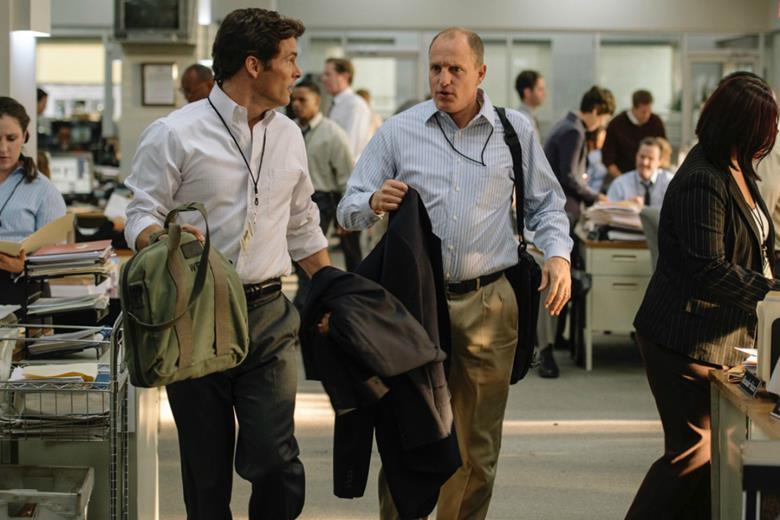 Do not conform to the pattern of this world, but be transformed by the renewing of your mind.

If you repeat a lie often enough, people will believe it, and you will even come to believe it yourself.

Think of the press as a great keyboard on which the government can play.

The New York Times has for so long been held up as the paragon of great, fearless journalism (remember the ending of Three Days of the Condor?) that it comes as a surprise that in Rob Reiner’s new film it is regarded as a villain, just a step or two above George Bush, Dick Chaney, Osama bin Laden, and Saddam Hussein, thanks to its uncritical acceptance of our government’s case for going to war against Iraq.

Based on a true story, Rob Reiner’s Shock and Awe, borrowing the name of President Bush’s invasion of Iraq, centers on the efforts of the staff of the Knight Ridder Newspapers to discover the truth about the government’s official reason for the pre-emptive war—that Saddam Hussein was developing weapons of mass destruction that threatened the stability of the Middle East and the world.

Even on the first day of the strike on the Twin Towers and the Pentagon, the administration began linking the Iraqi dictator with Al Qaeda, a charge that every expert on the Middle East knew was ridiculous because of their long-time enmity. Unfortunately, the reporters of the Times, The Washington Post, and all three TV networks relied on government sources rather than the experts. Only Knight Ridder reporters Warren Strobel (James Marsden) and Jonathan Landay (Woody Harrelson) and their editor John Walcott (Reiner) turned to those who knew and understood Middle Eastern history and Islam.

The reporters begin a round of contacts with government officials. Some of them hang up on him, and others, identified only as “government official,” cautiously confirm that both Bush and Cheney are lying about the intelligence that supposedly confirms their charge against Hussein. Needing contacts at a higher level, Walcott eventually convinces ace Vietnam-era reporter Joseph L. Galloway (Tommy Lee Jones) to join their team. (My review of the film based on Galloway’s book Once We Were Soldiers is in the April 2002 VP.)

At virtually every level the reporters face the charge that they are being unpatriotic in challenging the government’s campaign to persuade the American public to go to war. Not mentioned is made of the Dixie Chicks’ fall from popularity when Natale Maines, two weeks before the invasion, made her two-sentence statement in support of the European protest the impending invasion. Even the Knight Ridder’s own newspaper in Philadelphia refused to run their reports, causing Walcott to rush down to their offices to futilely protest the editor’s refusal.

When the vote for the war is arrived at in Congress, the major Bush collaborators are named–Joe Biden, Hillary Clinton, John Kerry, Joseph Lieberman, John McCain. Only about a third of the Senate refuses to go along, among them Senator Robert Byrd. The clip from his dissenting speech is a highlight of the film. He states that he does not want to repeat his mistake of trusting the word of the President during the Vietnam War without definite proof that are WMDs.  The ultimate sell-out is the man whom Galloway once had advised, Secretary of State Colin Powell lending his considerable prestige in support of the Big Lie.

I suspect that parts of the film include characters made up and used to explain matters to a public that too quickly forgets the recent past. There is a romance concocted between Warren Strobel and his neighbor Lisa (Jessica Biel): during their first date she reveals that she has looked up information on Iraq and Hussein, launching into a mini-lecture on Muslim history, the division into the warring factions of Sunnis and Shias and how Saddam Hussein has kept the peace in his nation where he and his minority Shia faction rule over the larger Sunni faction. Most critics have derided this as unnecessary, but from my experience in leading groups, I believe it is very helpful—I’ve yet to find average church folk knowledgeable about Middle Eastern history, recent or ancient.

The only other women figuring in the story are wives– Kate Butler’s Nancy Walcott is able to hold up her end of conversations with her editor husband when they discuss the news. A sinister note is added by Milla Jovovich, Jonathan Landay’s Slavic wife Vlatka, who fears for their family’s safety after a vicious email is sent, threatening the staff’s lives. However, this danger is not developed any further.

Probably the emotional highpoint comes late in the film when the wheelchair-bound soldier Adam (Luke Tennie), who earlier while testifying before a Congressional committee had asked the “why” of this unnecessary war that had crippled him for life, pays a night-visit to the Vietnam War Memorial. The Knight Ridder reporters are also there, sobered by their long struggle to expose the premeditated war plans of Bush and Cheney. There are no speeches. All we need to underline the importance of their investigative reporting is to see them in the same frame.

Though not as well developed as All the President’s Men, The Post, or Spotlight, Rob Reiner’s film is well worth supporting—and judging by the fact that I was the entire audience when I went to see it a Cincinnati art theater, it badly needs promoting! (Just checked and discovered the film has been dropped from the theater’s schedule—just after one week.)

As a “profiles in courage” story this is tops—continuing to investigate and charge the top two US officials of getting ready to send our troops to war on made-up evidence when all the rest of the media are supporting the President and Vice President shows an incredible commitment to get at the truth. Much is made of The New York Times reporter Judith Miller leading the pack in support of Bush’s war. She is given the last word in the clip that concludes the film, admitting to John Stewart that in regard to the Iraq War the Knight Ridder staff were “the only ones who got it right.”

The film also should caution us against blind patriotism, such as accompanied the Vietnam War and the terrorist attack on the Twin Towers. The healthy skepticism of members of the Fourth estate toward war plans—as well as that of the public and members of Congress—vanished amidst the angry desire to strike back at the enemy. Unfortunately, the real enemy was in another country where he managed to elude his pursuers, while we attacked the wrong country.

If this shows up at a theater near you, don’t delay in gathering a party to go and discuss it.

The editor & 2 reporters of Knight Ridder struggle to expose the lies of the Bush-Cheney administration as the latter prepare to invade Iraq.
Editor Rating ★★★★★4 out of 5
More Details