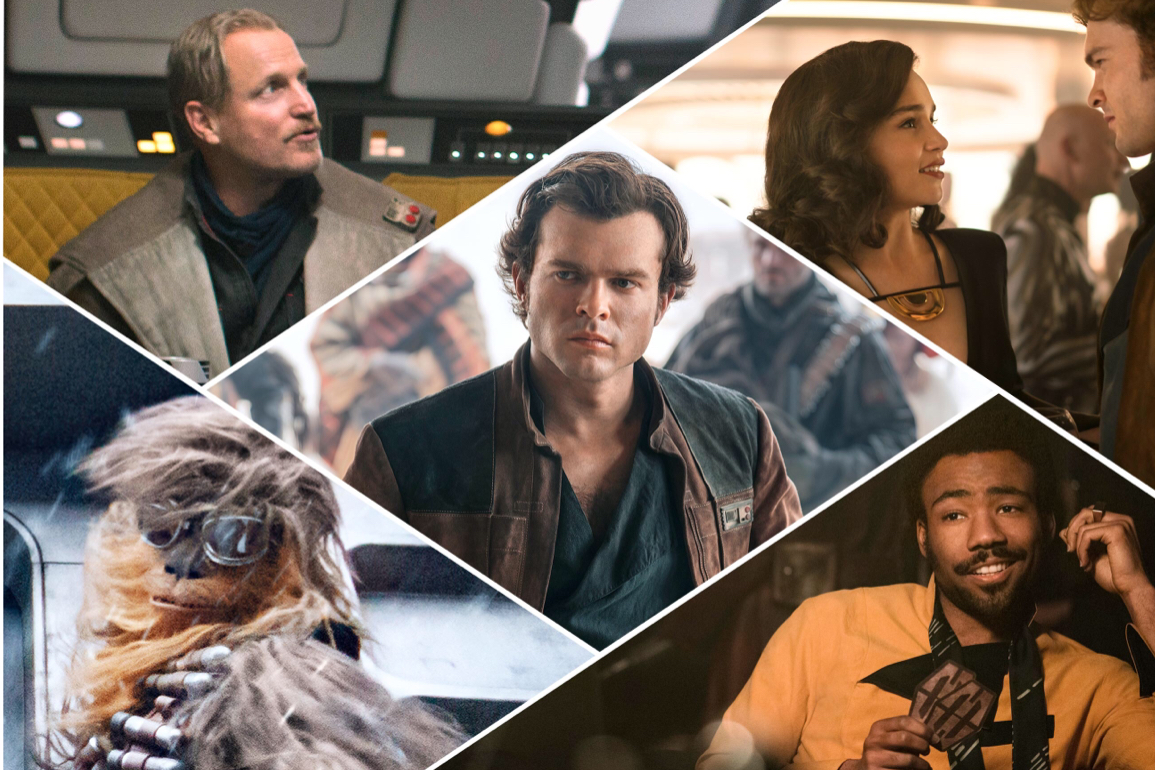 In those days there was no king in Israel; all the people did what was right in their own eyes.

This film suggests that Han Solo’s rough exterior and cynicism, which set him apart in A New Hope, was due to the early events chronicled in his life. Like Rick in Casablanca, his soul is seared by betrayal—in Hans’ case real and not just perceived. We also learn how he came by his last name; how he acquired his rust bucket ship The Millenian Falcon; and what happened on his legendary trip that he boasted about when he made “the Kessel run in less than 12 parsecs.” (This latter refers to the howler mistake in the original when the script writer used a measure of length— “parsec”—for one of time.)

Director Ron Howard, brought in late after the two original directors– Phil Lord and Christopher Miller– were fired over “creative differences,” delivers a deep space heist/cowboy film packed with thrills and a few surprises as it hurtles toward an ending that leaves us anticipating the two sequels for which actor Alden Ehrenreich has signed up, supposing, of course, that the public responds well to this prequel. Judging by the positive reaction of many critics, the actor need not worry about his job security for the next few years. A major factor in the success of this film is the script by the father-son screenwriters Lawrence Kasdan and Jonathan Kasdan, the former who wrote two of the best loved Star Wars films, Episodes 5 & 6, A New Hope, The Empire Strikes Back and The Force Awakens.

The scrolled prologue, stating “It is a lawless time” brought to my mind the last verse of the Book of Judges, a book filled with strong characters (even a woman) who led adventurous lives. The young, orphaned Hans and girl-friend Qi’ra (Emilia Clarke) survive on the crime-ridden planet of Corellia by stealing vehicles. Ravaged by over-mining, the polluted air hanging over huge factories where even children work as slaves, it is planet from which Hans hopes to escape by enlisting in the Imperial Navy. He hopes to bring Qi’ra with him, but is unable, Hans vowing to return for her.

Three years pass, during which during a futile war Han deserts and hooks up with Tobias Beckett (Woody Harrelson) and the criminal’s partner Val (Thandie Newton). There is an episode of the dangerous heist of a huge mono-rail train up in the mountains, followed by their being captured by master crime lord (Dryden Vos) Paul Bettany. He is the ultimate cynic when he tells Han, “Let me give you some advice. Assume everyone will betray you. And you will never be disappointed.” This turns out to be pretty much on the mark.

Vos has a surprise, Qi’ra, Han’s lost lover, is now teamed up with him in more ways than one. She, who appeared so sweet, turns out to be quite a femme fatale, with our heelro often wondering to whom she has given her heart. Or is it to what? In typical tough girl language, she says to Hans, “You’re after something. Is it revenge? Money? or is it something else? You look good, little rough around the edges, but good.”

There is much more to the plot, including the meeting up with Wookie Chewbacca (Joonas Suotamo) in a muddy prison and that fateful card game in which Han wins the Falcon from its first owner Lando Calrissian (Donald Glover). Maybe I should say games, because the crafty Lando wins a first game by literally having a card up his sleeve. The shot of Han returning to the bar for a rematch has an iconic shot right out of a hundred Westerns—we see Han, pistol strapped to his hip, standing in the doorway of the dive filled with tough-looking hombres—well, no, mostly creatures, Lando being the hombre. The latter is teamed up with an interesting character, his droid-girlfriend L3-37, voiced by Phoebe Waller-Bridge, interesting because she is concerned with the enslavement of droids by humans and others.

There are enough special effects to satisfy most geeks who love the sci-fi genre because it requires a small army of digital technicians to pull off a film. I loved the amazingly diverse aliens filling the dives and crowded streets of the cities, some wearing bubble helmets, so they can breathe their native atmospheres. I recall forty years ago George Lucas wishing he had had more time and money to make his great cantina scene in A New Hope more exciting with additional aliens. His successors have no such problem. When I was a boy I thrilled to the covers of sci-fi magazines such as Amazing Stories and Astounding Science Fiction with their eye-popping cover s showing multi-story high machines and mile-long space ships, which film makers could not match, given the crude cinematic tools available to them then.

There is no spiritual talk because there are no Jedis around to teach anyone about the Force. There is, however, spirited music, most of it composed by John Powell, who scored Ferdinand, How to Train Your Dragon, Bourne and Ice Age. John Williams did compose the opening “Han Solo” theme, and Powell incorporates liberal portions of the master’s music throughout the film. All in all, this is a fun-fest that makes no demands on the brain or claims to explore any spiritual or ethical issue. It might be just what you need to escape from the world’s troubles for a while, especially if you like Westerns and the previous Star Wars films. Bring on the sequels.

In this origin story Han Solo is betrayed twice & meets his partner Chewbacca & wins The Millenian Falcon in a card game.
Editor Rating ★★★★★4 out of 5
More Details