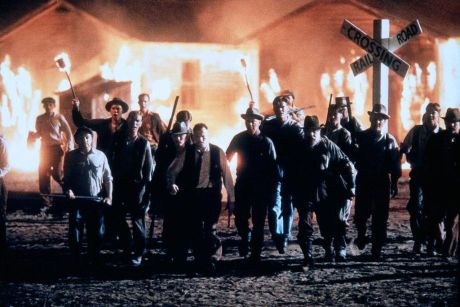 “It isn’t good for the man to live alone,” the author of the second Genesis creation story has God declare. And so he relates the story of the  creation of the woman,  the two forming a close communion with each other and with God. But this communion, this connectedness, is broken when the couple follow their own will rather than their Creator’s. They try to hide from God, and when confronted, try to shift the blame, the man even faulting God as well as his partner. Ever since then, Scriptures assert, humanity has been split asunder, disconnectedness becoming our lot, despite our efforts to overcome it. Much of the great literature, and the four films just reviewed explore this disconnectedness and our longing to be connected.

In Secrets & Lies Cynthia desperately wants to connect with her daughter Roxanne, but her comments and advice which flow from her motherly love her daughter interprets as mean-spirited interference. Cynthia, like so many parents, does not understand her daughter’s fierce desire for independence. And Maurice and Cynthia, despite their blood ties, have allowed themselves to drift apart. Maurice spends little time with his wife Monica, the two driven apart by their anxiety and disappointment stemming from their unsuccessful attempts to conceive a child. Then into their lives comes a young woman strongly desiring to discover her roots. Her race complicates her attempts to connect with Cynthia and the others, but when all of them are finally forced to face the truth of their secrets and lies, connection (read “reconciliation”) becomes possible.

The details are different in the other three films, but the basic story theme is the same, the desperate desire of human beings to overcome  disconnectedness – the gulf between the sisters Lee and Bessie and between Hank and both women in Marvin’s Room; the wall separating  mentally retarded Karl and the gay Vaughn from their society in Sling Blade; the barbed wire-like divisions between the whites of the village of  Sumner and the blacks of Rosewood.

In each story it is a decisive, authentic act – of Bessie and Lee and Hank confronting their faults, even “good” Lee letting go of her resentment as she discovers how blessed she has actually been (Marvin’s Room); of  the boy reaching out in his naiveté to Karl, and the acceptance of  the mentally handicapped man by Vaughn, Linda, the warden, and Karl’s understanding employer (wonderful acts of grace–Sling Blade); of Mann’s deep desire to settle down and connect with the soil and neighbors, and of John Wright, encouraged by his unprejudiced wife, to take the risk involved in hiding the fugitive and then joining with Mann  and the train engineers to rescue the survivors in the swamp Rosewood). 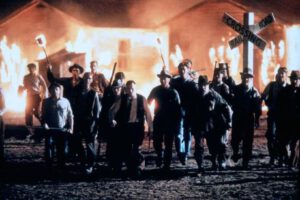 There is little overt religious or theological language in any of these films, but for the person of faith viewing them, each film is an affirmation of the basic thrust of faith — that there is a God who seeks to connect us with a love that overcomes  every obstacle, even death. The writers of the Scriptures see this movement toward connectedness as beginning with the call to Abraham and the promise that he and Sarah would birth “many nations.” The New Testament writers see this culminating in the life, death and resurrection of the Palestinian Jew Jesus of Nazareth. Paul of Tarsus best sums it up in the eighth chapter of his Letter to the Romans — after listing a veritable catalogue of things that disconnect us, he ends by declaring, “Nothing in all creation can separate us from God’s love for us Christ Jesus our Lord!” (Rom. 8:39b CEV) Whether or not the filmmakers or the characters in their stories are aware of the gracious work of God in Christ, their films affirm and, to the discerning viewer, declare it. 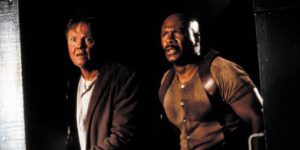 Reprinted from the April 1997 issue of VP.