I know Jean Stapleton was 90 when she died, living well beyond the Biblical three score and ten, but I am still reluctant to let her go. And so, as a viewer and one who wrote about her, I want to share a few thoughts about my slight involvement with her most famous character Edith Bunker . 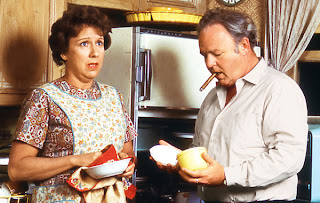 I am old enough to have watched All in the Family when Norman Lear’s show was smashing the social and media taboos of the time. What a joy it was to behold! Jean Stapleton’s Edith, married to TV’s most famous bigot, always tried to defend those whom Archie was attacking–the gay friend of Mike; the new African American neighbors, the Jeffersons. At first she was depicted as, in Archie’s words, “a dingbat,” but as the show evolved, she became more than just a doormat for her husband to tread on. Her naive but honest remarks often deflated Archie or brought him around to do the right thing. She frequently became the mediator between Archie and whomever he was feuding with–usually Mike. 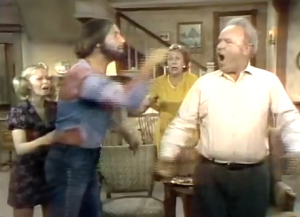 I became so intrigued by her character that I wrote an article in 1974 for the Christian Century entitled “The Gospel According to Edith Bunker.” A friend and I had been intending to write a book about the show itself, but he kept putting it off, so I settled for an article instead. 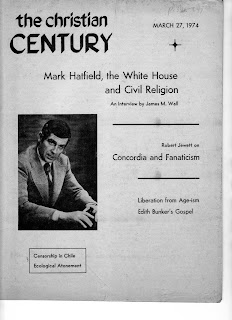 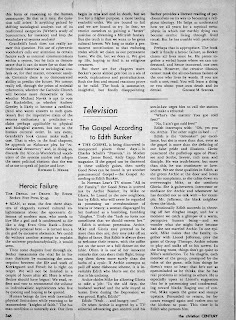 An editor at Abingdon Press read the article and called me up, suggesting that indeed a book project could come out of this. However when I wrote to Norman Lear, his associate replied that another Presbyterian minister had also written them about a book project. Seeing that they had granted him permission to read and use excerpts from the scripts, they did not think another book was warented. My editor was also disappointed with this news, but as we talked over the phone, we came to an agreement to write another book, one that would survey the various offerings of television in general, and so in 1976 Abingdon published Television: A Guide for Christians.

My editor was very creative, suggesting that instead of chapter titles, the contents would be: “Sign On,” serving as a first chapter; WSAD Channel 2 “Life Can Be Rotten” The Soap Opera; KZAP Channel 3 Adventure Series; WLIE “Promises, Promises” Television Advertising and Values; KKID 5 “Suffer the Little Children” Children’s Programming & the Kingdom; WYUK 6 “A Laughing Matter” Situation Comedies and the Gospel; KNEW Channel 7 “And That’s the Way It Is” Man’s News & God’s News–Fact & Faith; Sign Off.

The book was intended not so much to be about TV as it was to involve the readers in group engagement with the various types of programming. I wrote two skits as examples of what readers might create, “The Loves of David,” a soap opera based on King David’s infamous affair with Bathsheba, and an episode from a sitcom based on Jesus’ Parable of the Two Men Praying in the Temple. It was the latter with which I partially satisfied my desire to write about All in the Family.
We couldn’t actually use the series’ title, so our series was called “A Fall in the Family,” and the skit involved Arnie and Enid Clunker discussing with Glory and Mack how upset Arnie was in church that morning when a dirty hippy came to the worship service. I was surprised that the staff artist left no room for doubt as to who were the source of my Clunker family. 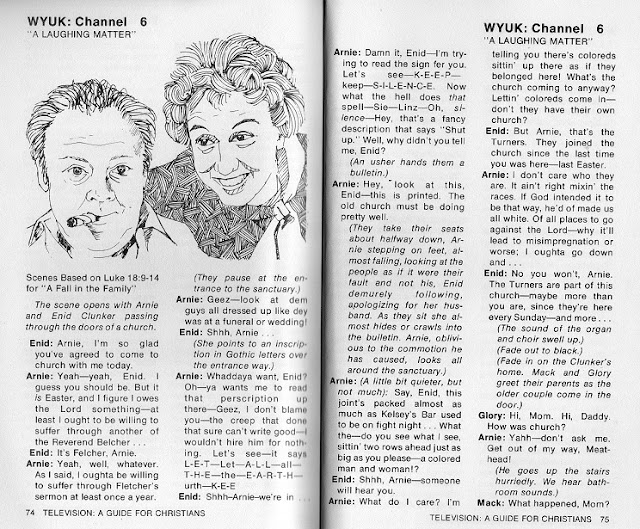 I’ve used that skit in a lot of churches and numerous retreats myself, and have heard from a few readers who reported that they had fun with it too. (Insert shameless commercial: both skits are part of a “Gospel and Comedy Retreat Kit” available from my Visual Parables.)

Meanwhile, the book that I originally wanted to write came out–God, Man and Archie Bunker by Spencer Marsh. And a very good one it was, too. Soon it was accompanied by a tape with sound bites from the show and a study guide for group use. I usedthe book and tape with both adults and youth, the latter especially in confirmation classes. 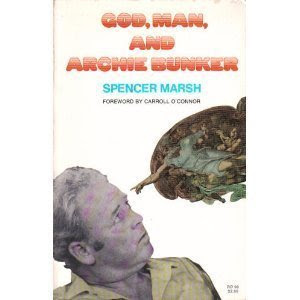 I did receive what amounted to a consolation prize for not getting to write the All in the Family book. In observation of the 100th program of the series Norman Lear produced a one-hour special hosted by Henry Fonda. The program was divided into sections, each one focusing on one of the four main characters. To introduce Edith Bunker, Mr. Fonda said, “As Edward McNulty wrote in the Christian Century…” Now on the night of the broadcast I missed this because I was conducting a wedding rehearsal. When I arrived home my wife Sandra met me at the door with a wine glass full of our favorite beverage, Welches’ Sparkling Grape Juice. As she congratulated me she reported that Henry Fonda had quoted my article, but when I asked what part, she replied, “I don’t know.” She had been eating something and excitedly threw it up in the air when she heard my name, rushing to the stairs to call to our children to come down and hear about their father. By the time she returned to the TV, the introduction was over. Sigh.
And then the next day we learned that in another nearby city the show had been pre-empted by a football game so that it would be broadcast that night. (Talk about grace!) You can well imagine that we were all gathered around the set that night. The paragraph that my favorite actor read is the next to the last one. After commenting on her lack of education and such, I had written: “Edith might think that Plato is a Walt Disney dog, that Aristotle is a Greek shipping magnate, and that Marx is a great comedian, but she possesses something greater than factual knowledge: a knowledge of the heart, an insight into the soul.”
And so, these are some of the memories I associate with the wonderful actress Jean Stapleton. Carroll O’Connor deserves all the praise he has received for playing America’s “most lovable bigot,” but we must never forget Jean Stapleton’s incredible role in making the series such a groundbreaking hit. I have heard people mention that the show became such an icon of American culture that the Smithsonian in Washington asked to display Archie’s chair from which he spewed out his opinions and slurs. That is but half of the truth–the display is not just Archie’s chair, but Edith’s as well. May both stars be long remembered! 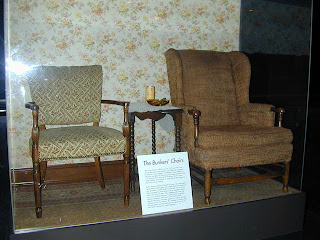