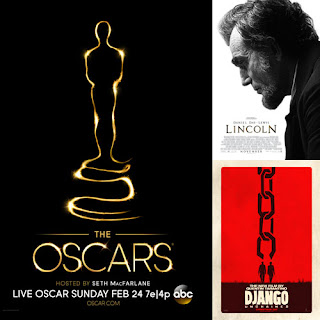 Well, the 2013 Oscars are now history. Although Seth McFarlane did a fair job at times of poking fun at the pretentiousness of the Awards ceremony, his bad taste evidenced in the comments and song about boobs turned my wife off so much that she stopped watching. The Lincoln joke was a bit much too. And those totally forgettable songs at the beginning–well sung and staged–but so soulless that I was tempted to switch channels for the duration. And then came the beautifully staged and timed overview of Les Miserables, which made the early songs pale even the more.
Another good musical section was the way in which Barabra Streisland was brought on beneath the large image of Marvin Hamilsch at the end of the memorial segment. So appropriate. And does that glorious song remind us how much we lost when the composer died–but also how much he left us!
It was good to see LIFE OF PI garner some early awards, and then Ang Lee to win as Best Director. But I felt LINCOLN was robbed by the selection of ARGO, admittedly a wonderful adventure film, but given the scope and complexity of Steven Spielberg’s epic production, it seemed that the Academy members made the wrong choice for Best Picture. Even mores so in choosing Ann Hathaway as Best Supporting Actress. She was fabulous, but how long was her screen time in comparison to Sally Field’s? And Sally Field’s incredible performance ran the gamut of emotions–anger/rage during the arguments to despair over the loss of Willy, to light, but acidic humor when confronting Congressman Stevens in the receiving line. But I suppose they were thinking that she had already won two Oscars, so give this one to the young and upcoming actress.
At least there is no complaint over the choice of Best Actor. I think the roof might have fallen in had Daniel-Day Lewis been passed over. His is a performance in which the word “great” is not at all an overworked adjective. It also was good also to see Quentin Tarantino receive an Oscar, though I wish it had been for PULP FICTION.
How I missed Billy Crystal and those wonderful clips in which he was inserted into a movie scene! Maybe next year….But it was a delightful surprise to involve Michelle Obama in the presentations. No doubt the Obama haters will cite this as further evidence of left wing Hollywood’s support of the President.
Now it’s a new year movie-wise, with such movies as 42, a retelling of the JACKIE ROBINSON STORY to look forward to. I am always pleased with the way that creative writers and directors keep coming up with new films to challenge as well as entertain us.