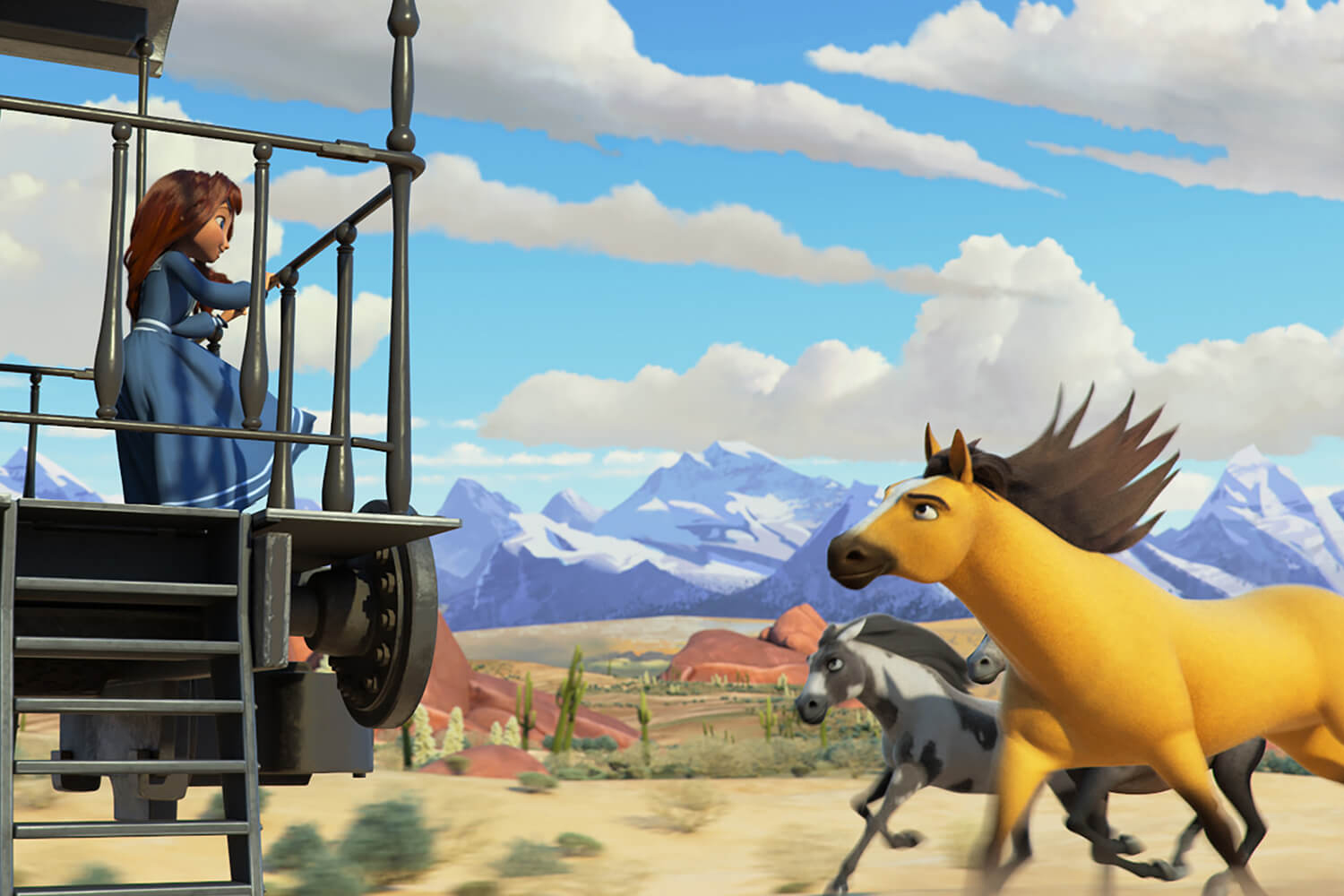 Love is patient; love is kind; love is not envious or boastful or arrogant 5 or rude. It does not insist on its own way…

DreamWorks Animation’s directors Elaine Bogan and Ennio Torresan have given families an enjoyable new film that should please the young & old. Or I should say, they preside over the hundreds of technicians and artists—enough to populate a village!—required to create a CGI film of this length and at times breath-takingly beautiful. And of course, like all such family films, life messages are conveyed in a non-preachy way. Our daughters will especially take to this film with its affirmation of sisterhood.

Lucky Prescott (Isabela Merced) is a spirited girl raised in the East by her Aunt Cora (Julianne Moore) because her widowed father Jim Prescott (Jake Gyllenhaal) did not think the Western town of  Miradero was a suitable place for his daughter. The girl has grown up far from her birthplace not aware that her mother Milagro Navarro, had been a famous horse-riding stunt performer. And yet, it is apparently from her mother that the girl has inherited such a fearless spirit breaking the rules of propriety that Aunt Cora feels she can no longer handle her niece. Thus she packs them off to rejoin Lucky’s father at the edge of the frontier. Fortunately the railroad by this time stretches across the country. It is from the back of the train, shortly before their arrival,  that Lucky makes eye contact with a stallion whose free spirit matches her own, Spirit leading a herd of wild horses seemingly racing the train.

Miradero is a small town with little of interest to Lucky at first. She does begin friendships with two girls her age, Abigail Stone (Mckenna Grace) and Pru Granger (Marsai Martin. Shortly after her arrival Spirit and his herd are captured. Local wrangler  Hendricks (Walton Goggins, whom Lucky has met, vows to break it. He fails, of course, which leaves it to Lucky to connect with the animal by means of a seemingly endless supply of apples. One does not have to be a horse lover to appreciate the contrast between the two methods of taming a horse, one by brute force based on cooperation, and the other based on affection and wooing, leading to cooperation rather than imposing.

The plot becomes more complicated when Hendricks and his gang commandeer a train and try to transport Spirit and his herd to a ship waiting to transport them into captivity. There is a wild pursuit sequence involving Lucky and her two friends facing numerous perils in the mountains before they can catch up and save the day at the last minute. The film ends with Lucky showing she understands that true love is concerned with the welfare of the beloved rather than the fulfillment of one’s own desires. The lesson that love is being able to let go is one that many adults never learn.

I wrote the above before reading about the original horse film, Spirit: Stallion of the Cimarron that came out in 2002, a film that I missed at the time.(Nor have I seen the TV series SPIRIT: Rising Free.) From what I have read of it and seen in the trailer, it was made from a very different viewpoint, beginning with the human protagonist, a Lakota lad named Little Creek. Like the horse, Little Creek is a captive who manages to break free from the cruel soldiers who have held them both prisoner. Far from embracing the railroad and the settlement of the West by Whites, that film was a gentle protest of both. The new film takes place in  different universe, there being no connection to the events in the original Spirit film. I hope eventually to see and report on the old one. From what I have seen, I would recommend that you see it over the current film. Interesting how the same company can take a character and within a 20-year period produce films with such opposite sentiments—true, there is the common theme of never giving in, but the first centers on a horse that never gives in; but the theme is shifted in the new film. Spirit bows down to a little girl who never gives in.

A spirited girl rejoins her father in the West , connects with a stallion equally spirited & sets off with 3 friends to save the horse.
Editor Rating ★★★★★4 out of 5
More Details