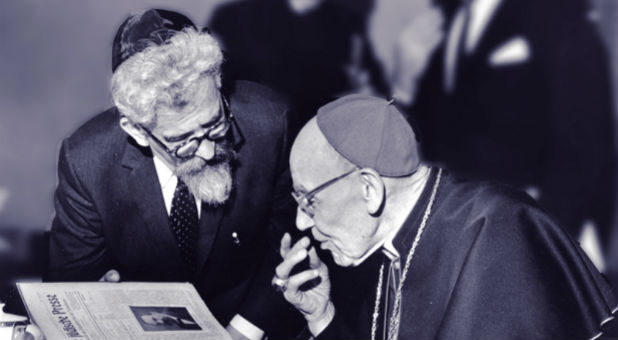 
Then the Lord spoke to Moses, “Go and tell Pharaoh king of Egypt to let the Israelites go out of his land.”

Thanks to Martin Doblmeir’s PBS documentary Jewish theologian Abraham Joshua Heschel will become a better known figure to millions of viewers. Now available on DVD and streaming, this is a worthy addition to his other filmed biographies of great thinkers and movers—Dietrich Bonhoeffer, Dorothy Day, Reinhold Niebuhr, all brave thinkers who have had a deep impact upon the modern world.

The film’s title is taken from a telegram the rabbi sent to President Kennedy in response to the President’s call for a national conference on race and religion. However, Heschel knew that the Kennedy was not really interested in a concerted effort of the federal government to mount an attack on racism. Instead, the conference was  intended to ward off A. Philip Randolph’s planned march on Washington in 1963. Such a March would have been politically embarrassing and would force him to take action that would hurt him at the polls in the South in the 1964 elections. Instead of agreeing with Kennedy, Heschel, according to his daughter Susannah, sought to bring the President fully into the struggle for equal rights, “I propose that you, Mr. President, declare a state of moral emergency. The hour calls for moral grandeur and spiritual audacity.”

It did indeed, and Rabbi Heschel himself was prepared fully to plunge himself into the struggle, later marching by the side of his friend Dr. King at the Selma Bridge in 1965. One of the interviewees speaks of the reports of snipers lying in wait to shoot the leaders, and thus the fear of some leaders in positioning themselves in that front line. But there was the rabbi, boldly marching in step with Dr. King, very distinguishable by his white hair and beard.

Th film gives us a good summary of Heschel’s life, from his birth in Warsaw in 1907, the influence of his Hasidic heritage on his faith that was more than just a scholarly interest in the Torah, and his attitude toward life that involved joy and the assumption of responsibility toward the oppressed. During his professorship in Berlin he came up against oppression as Hitler assumed power and began to persecute his opponents,  especially the Jews whom he hated as a people. Heschel was able to escape to America, but his mother and three sisters could not, and thus perished in the war and the Holocaust. He referred to himself as a “brand plucked from the fire,” a phrase that ought to endear him to Methodists. In America, he taught first at Hebrew Union College in Cincinnati, the president of which had worked hard to arrange for the refugee to come to the country. Then after five years he moved to New York to join the faculty of the Jewish Theological Seminary (though at a junior level due to differences in field of study). His growing scholarship and his marriage to concert pianist Sylvia Straus are noted, along with the nation’s growing unrest over Civil Rights and then the movement against the Vietnam War.

Heschel proved to be no ivory tower Biblical scholar—how could he be when his two-part book published in 1962 was The Prophets, widely read by Jews and Christians, and proclaimed a masterpiece. Just as the Hebrew prophets were concerned for social justice, so would Heschel be, becoming a friend of Martin Luther King Jr. The latter, like virtually every other social justice activist was indebted to The Prophets.  Not only did Heschel march with him at Selma. But he also inspired Dr. King to make that famous anti-war speech at Riverside Church in 1967. Heschel was there and gave his own shorter speech.

Especially fascinating to you who are ecumenicists will be the section on the rabbi’s role at the Second Vatican Council where he met with Cardinal Bea who was in charge of writing a new paper on Jews and Christians—and what a difference he made, the benefits which continue to this day. Although the original draft rejected the “Christ Killer” charge against the Jews. It contained a section in which the eventual conversion of the Jews was called for. Heschel argued that this struck at the very core of his existence and ought to be dropped, which it was.

Another source of enjoyment in the film is Doblmeir’s numerous instances of inserting paintings by Jewish artists, especially several by Marc Chagall. One of my favorite artists, Chagall captured the joy of Hasidism in his paintings of Jewish life that often included a fiddler and dancing. And he depicted suffering as well, surprisingly (to some) employing a crucifix to symbolize the sufferings of the victims of war. And in his Biblical paintings he often depicted Moses and the Exodus, the great prophet of liberation holding the tablets of the Law. There are works by other artists as well, including Rembrandt’s great depiction of Moses, but it is Chagall’s, I believe, that best embody the viw of God and of life embraced by Abraham Heschel.

Director Doblmeier gathers a veritable classroom full of scholars and activists who add to our knowledge of this great man. Making insightful comments are  Civil Rights icons Andrew Young, the late Congressman John Lewis and Jesse Jackson, as well as Pulitzer Prize-winning historian Taylor Branch, popular Biblical scholar Walter Brueggemann, fiery theologian Cornel West, and Heschel’s daughter Dr. Susannah Heschel, herself a professor of Jewish studies, and many others. Interspersed with archival news clips of the times—from Hitler’s Germany through the Civil Rights and anti-Vietnam War marches to today’s protests—photos, and even some clips of Heschel himself speaking. I love the clip in which he says, “When I marched in Selma, I felt my legs were praying.”

This film provides a rewarding portrait of an important mover and shaker of the 20th century. During a time of great conflict and suffering we need his insights into the reality of a God who understands suffering humanity, and often, in fact, suffers with it. Hopefully, it will make you want to read some of his writings for yourself.

A documentary film about Rabbi Abraham Heschel, a scholar who influenced Dr. MLK & the Civil Rights Movement & was an important adviser at Vatican II.
Editor Rating ★★★★★5 out of 5