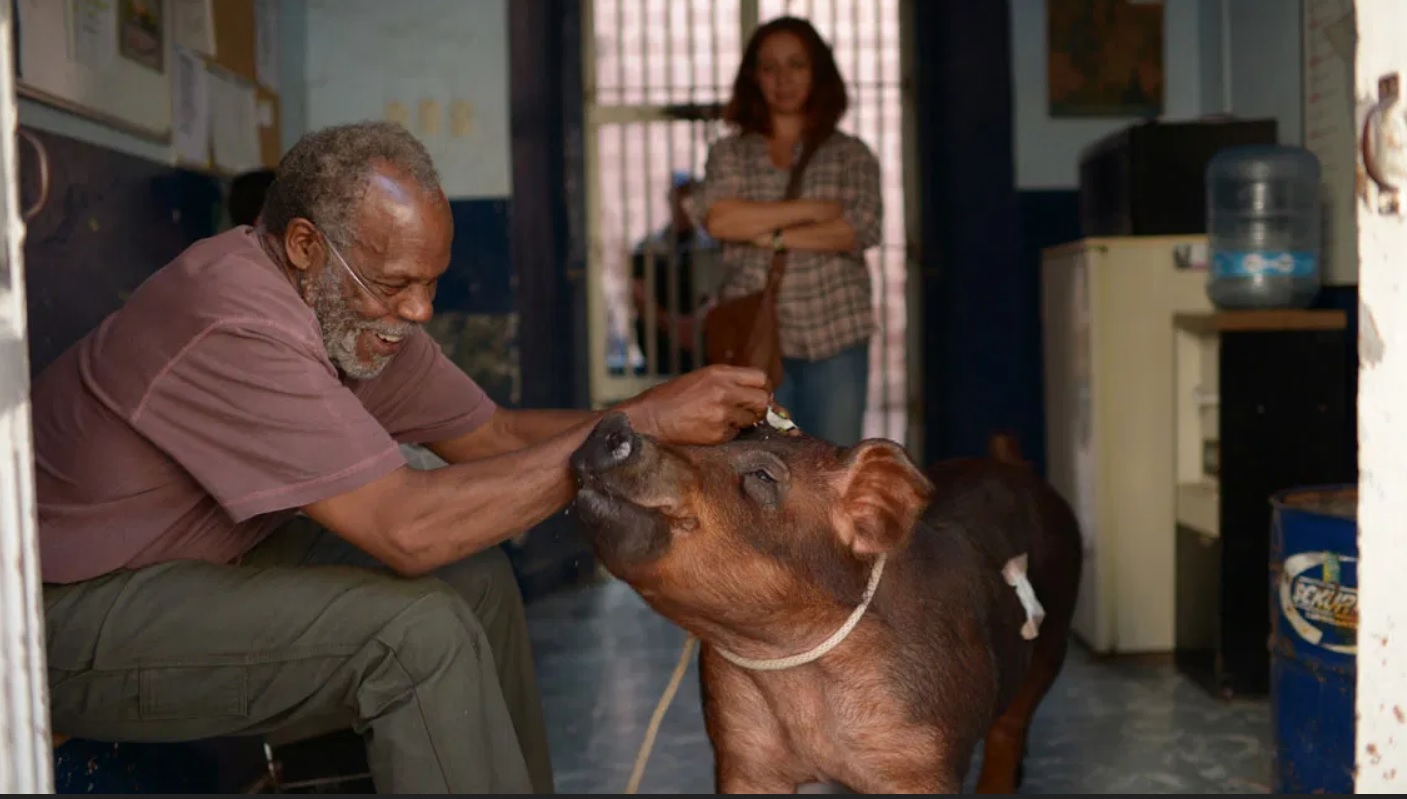 Danny Glover, whose name drew me to this picture, portrays California hog farmer Ambrose Eubanks, whose health has deteriorated so much that he knows he does not have much time to live. Equally deteriorated is his business, with the bank about to foreclose on the farm. He sets forth on a journey that has two goals. He wants to provide a comfortable future for his pet pig Howard and to raise enough money to leave his estranged daughter Eunice (Maya Rudolph) well off. The Mexican son of his deceased best friend, Payo (José María Yazpik), has agreed to pay $50,000 for Howard and provide a comfortable home for the animal.

Ambrose loads his porcine pal into his van—no uncomfortable animal trailer for Howard!– and sets off. We are not shown at the international customs station how, but by some means Ambrose manages to pass through, and they are off on the long trip through Mexico to Payo’s hog farm. Howard’s comfortable travel is seen in stark contrast as they pass a tractor trailer filled with soon to be slaughtered pigs crowded into cramped cages. The pair are stopped by a pair of Mexican highway patrolmen who cite Ambrose for not having a travel permit for Howard, but a quick trip to an ATM brings enough cash to pay off the cops, and Ambrose and Howard are soon on their way. What to do with Howard during the overnight stay at a motel? Why, bring the hog into the room, of course.

Ambrose’s visit with the son of his friend Payo starts off well, the host obviously thriving in the hog business, judging by his luxurious estate. He has a check waiting, and the two enjoy reminiscing about Payo’s father. However, when Ambrose is conducted on a tour of the slaughterhouse and see how the pigs are mistreated beforehand, contrary to his beliefs, Ambrose changes his mind, returns the check and leaves.

Soon daughter Eunice, worried about him, travels to Mexico and finds him. The movie thence becomes a father-daughter road trip, filled with acrimony and moments of humor. Their journey takes them to the Mexican coast where old friends promise to receive Howard and treat him with kindness. As mentioned earlier, I was first drawn to the film because it stars Danny Glover, but the story itself, involving a kind man’s concern, first for the future of a beloved pig, and then for the humane treatment of all porcine creatures, confirmed that  the actor did well to agree to star in this small but delightful film.

The film’s conclusion will leave you with a tear or two but also with  the satisfaction that matters ended well, even though twinged with a measure of sorrow.

An old dying man travels to Mexico to give his pet pig a good home, but changes his mind & is joined by his estranged daughter to find a better home.
Editor Rating ★★★★★4 out of 5
More Details