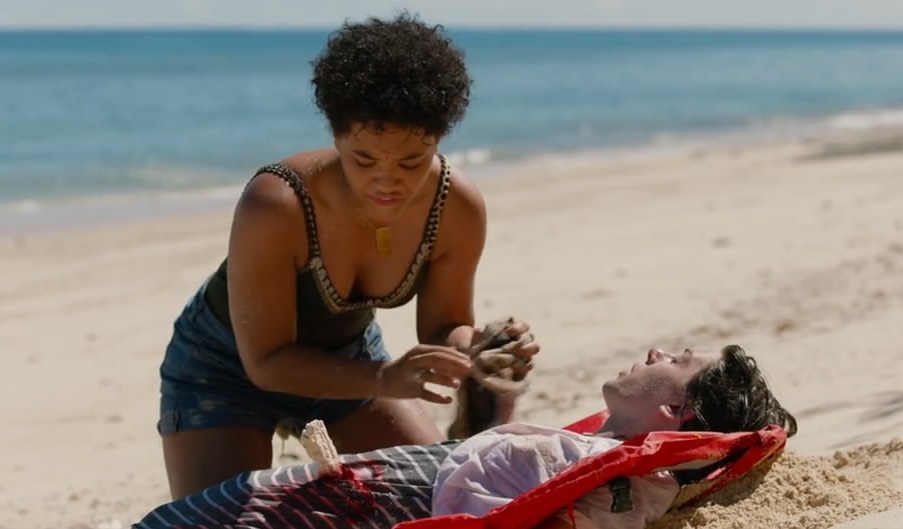 I cry aloud to God,
aloud to God, that he may hear me.
In the day of my trouble I seek the Lord;
in the night my hand is stretched out without wearying;
my soul refuses to be comforted.
I think of God, and I moan;
I meditate, and my spirit faints.

Director J.D. Dillard also co-wrote the screenplay of this tense thriller set on a desert island. The sweetheart of the title is Jenn (Kiersey Clemons), who finds herself swept up on the sandy beach of a tropical island. There is a companion beside her, but he is so badly wounded that he dies during the brief time she goes in search of water for him. Now alone, she might remind some viewers of Tom Hanks in Castaway. Except, there is no ball named “Wilson.” There is an “other” on her island, but it is far from harmless. At the bottom of the sea she sees a hole from which emerges each night a reptilian creature that stands on two legs and ventures out in search of food. Jenn is terrified when she finds that it has dug up the body of her companion and eats half of it. During succeeding nights, she has to hide among the trees as it stalks her. Once she even crawls into a log for protection. The creature smells her inside and shakes and claws at the log but is unable to reach her. There is also the night when she hears a plane flying over. She has found in a ruined camp several useful items, including several flares and a gun. Of course, by the time she can get the device to work and shoot off a flare, the plane has flown beyond the horizon.

Although the details of Jenn’s previous boat trip remain sketchy, we do learn she had a boy friend aboard when he and a girl appear in a covered life raft—these are Lucas ( Emory Cohen) and Mia (Hannah Mangan Lawrence). Jen swims out and brings the craft to shore. On Recovering from his ordeal, Lucas seems more interested in Mia. Jenn is also puzzled when she sees his Swiss Army knife, and spots blood on a blade. Jenn tries to convince them they must leave the island as soon as possible because of the creature, but apparently on the boat she had had some truth issues. Even had she not, the age-old question of such horror stories is there, “How do you convince someone of the truth of a claim too fantastic to be believable?” Or should she take the boat and launch out toward the relative safety of the ocean?

The sign of a good horror tale is how much it appeals to the imagination. Dillard does a good job of keeping us in suspense by not showing us much of the creature until pay-off time. This film also is distinguished by featuring a young woman of color who is anything but a princess awaiting rescue. Kiersey Clemons, who was so sweet and charming in Hearts Beat Loud demonstrates a gamut of emotions, from bewilderment, fear and terror, to pleading, and determination as she fights for her life.

Jenn is by no means a praying person, but Psalm 77 expresses well her emotions as she tries to stay one jump ahead of the creature that wants to make her its dinner. The Psalmist thinks back to how Moses delivered the people from disaster at the Red Sea, but for Jenn there is no deliverer—she is entirely on her own, though like Moses, she does have a staff. She has managed with a stone to sharpen one end. This, and her wits, is all that stands between her and a gruesome death.

This is a horror thriller that will make you forget for its brief span all your troubles and cares.

A young black woman, washed ashore a desert island after a boat sinks, struggles to stay alive when a tall amphibious monster stalks her each night.
Editor Rating ★★★★★4 out of 5
More Details