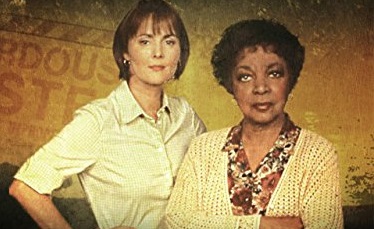 The earth is the Lord’s and all that is in it,
the world, and those who live in it;
for he has founded it on the seas,
and established it on the rivers.


I know that the Lord maintains the cause of the needy, and executes justice for the poor.


The wicked accept a concealed bribe to pervert the ways of justice.

If you appreciated the David vs. Goliath film Erin Brockovich, you will welcome this 2001 Lifetime Channel Movie. It is one of 4 movies on a DVD, one of which we have already reviewed, Attica. (There is one more that we will get to eventually, the film adaptation of James Baldwin’s novel, GO Tell It On the Mountain.)

The setting of this true-life story is in an over-industrialized section of Louisiana where housewife Pat Melacon  (Laura Innes) has grown up. She becomes aware of the dangerous toxicity of the air when she and daughter Catherine Melancon (Hallee Hirsh) come upon a near accident caused by the woman driver’s sudden inability to breathe. She soon learns that their air is among the most highly polluted in the nation, often referred to as “Cancer Alley.” Thus it is alarming that a huge Japanese chemical company named Shintech is planning to build a giant facility that will up the pollution rate even more. Even though the various government agencies have not approved the plan, the company is working at the site to get it ready for construction.

She teams up with veteran Civil Rights activist Emelda West (Ruby Dee) for the thankless task of blocking Shintech. Neither local officials no the governor want to hear the pair, and it is hard to gather many local residents for a meeting. Shintech is spending millions of dollars on the project, so no official wants to turn away such a windfall. When one meeting is held, Shintech assembles so many speakers in favor of the deal that the activists cannot get to the microphone before most of the audience have gone home. Some locals are wooed by the company’s promise of local jobs, though it is pointed out that most of the jobs are given to highly trained outsiders, not to the barely educated locals. Pat’s husband James (Chris Bauer) also resents her being away so much, as do her children. (Sound familiar, Brocovich fans?)

Despite the obstacles, the two, now-friends, persist. Emelda declares, “I will go all the way to Japan to tell Shintech in their own back yard that we don’t want them in ours.” With the help of Green Peace that is exactly what the fiery-tongued activist does in one sequence. How they eventually triumph adds up to a semi-satisfying climax. I qualify this because, although the intrepid activists blocked Shintech from building the plant in their back yard, the powerful corporation went elsewhere and build it. As long as wealthy corporations can buy politicians at state and national levels, they will continue their predatory practices in regard to Mother Earth.

When Louisianan Pat Melacon & Emelda West lead a protest against a chemical company threatening to pollute their water, they have to battle their elected officials as well.
Editor Rating ★★★★★4 out of 5
More Details