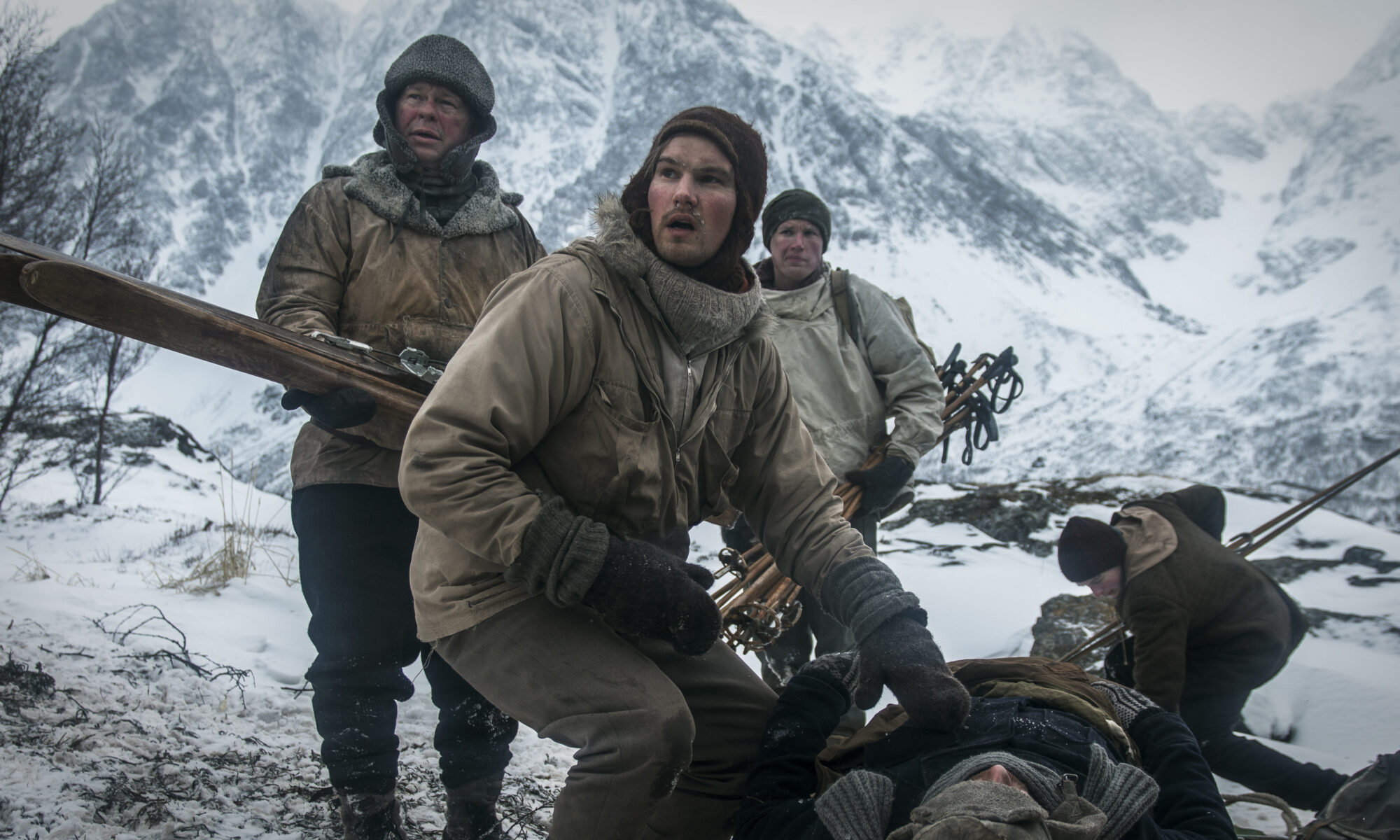 Rescue me from the cruel sword, and deliver me from the hand of aliens, whose mouths speak lies, and whose right hands are false.


O Lord my God, in you I take refuge;
save me from all my pursuers, and deliver me,
or like a lion they will tear me apart;
they will drag me away, with no one to rescue…

I knew nothing about Norwegian patriot Jan Baalsrud before watching Dutch-born director Harald Zwart, and so was surprised that this WW 2 era film is a survival rather than a combat film. Jan’s story was already told onscreen in 1957, the Norwegian Ni Liv (Nine Lives),nominated for an Oscar. Because that film is not accessible, I am grateful for this new retelling.

Jan Baalsrud (Thomas Gullestad) is part of an ill-fated commando squad of Norwegians trained by the British in the Shetland Islands. Their mission in 1943, dubbed Operation Martin, is to infiltrate Tromsø in German-occupied Norway and destroy a German air control tower at Bardufoss and then to organize secret resistance cadres. Unfortunately, a series of flukes led to a Norwegian traitor informing the Germans of the impending raids, the result that a German ship was waiting for the fishing trawler transporting the commandos. During the attack Jan manages to swim to shore, but one of his comrades is killed, and the others captured, interrogated and tortured, and then executed. The Germans chase Jan, shooting him in the foot, but he manages to swim across an inlet deemed unswimmable by locals, limping his way in his search for sanctuary.

The local Gestapo leader is certain their quarry drowned, but his superior Kurt Stage (Jonathan Rhys Meyers) refuses to accept the verdict, demanding that the body be produced. Stage has an impeccable record of capturing his man, and so he tells the hapless Nazi underling that Baalsrud is not dead until he says he is. The Germans have captured an invaluable cache of information contained in a briefcase, including the forged identity cards that has a photo of each of the infiltrators. Any Norwegian giving shelter to the fugitive can be executed.

Despite the threat of execution, the wounded Jan is aided. Unfortunately, the sympathetic doctor is not available at one location, just the midwife, who dresses his wound—his large toe has ben shot off—but tells him he must get to a doctor soon or risk death by gangrene. At another house Jan connects with the couple’s little daughter, who loves geography and thus is impressed by Jan’s account of traveling around the world. She draws a very recognizable map of the world and gives it to him. Impressed, he folds it up and places it in a pocket. Their banter includes Jan asking her, “Have the Germans stolen our Northern Lights?” to which the child replies, “That’s impossible!” Fortunately, later on, when he takes it out to look at again, he tears off a strip at the lower left corner. The proud child has signed her full name, and Jan realizes what could happen if the Germans should get hold of it—which eventually they do when Jan has to leave much of his possessions behind during one of many narrow escapes. Because they interact with him over a longer period, two helpers emerge in more detail, by Marius (Mads Sjogard Pettersen) and Gudrun (Marie Blokhus), who are involved in the final plan to get the by now thoroughly incapacitated man to neutral Sweden.

The Germans pursue relentlessly, Stage proving even more ruthless than Inspector Javert. He is so determined to prove his belief that Baalsrud could have survived the freezing waters that he forces several prisoners to wade into the water and kneel down as he times hem before they collapse. All prove to be too weak, so the German himself wades into the water, using his own body. As he suspects, he maintains consciousness long enough to have made the swim, so he keeps up the pursuit. Several times the searchers almost nab their prey, once while Jan is hiding in a hayloft with his pistol ready to shoot the German who has climbed up the ladder. Ironically, it is Stage’s prized Nazi Party pin that saves them both, the pin knocked from his breast and falling into the hay slightly below the loft. The German backs down to search for it and decides to search elsewhere.

Besides his pursuers, Nature is Jan’s biggest concern. The ice-cold water, the strong wind. The spreading gangrene, a blizzard, and even an avalanche created in the mountains when a German plane spots him traveling by skis and strafes him, the bullets’ impact triggering the fragile snowbank into falling. Probably the hardest scene to watch, however, refers to what Jan must do to prevent the gangrene from spreading, using the knife given him by one farmer.

This is a film filled with grace moments, a series of Norwegians, young and old, risking their lives to save his. Too incapacitated to be an effective soldier, all recognize that Jan now has a great symbolic meaning for everyone. One of his captured comrades yells out to Jan, “Make sure this wasn’t all in vain.” And a series of people go all out to keep him alive and uncaught. At least a couple of times one of Jan’s helpers says that his survival gives them hope. At this point I was reminded of one of my favorite Spencer Tracey films that I saw as a boy in 1944, The Seventh Cross, based on a novel about the seventh escapee from a Nazi concentration camp. The Germans had erected seven crosses in the compound, and as a prisoner is caught, he is crucified on it, until only one is left. All of the inmates place their hopes on that one remaining empty.

Even though we know that Jan survives—at the beginning of the film we are told he is the only on of the 12 who will return alive—the film is a nail biter, often leaving us to wonder, “How will he get out of this one?” This is especially true when things go terribly wrong when Jan, his body tied to a homemade wooden sled, must use a reindeer to conclude his journey! One is left wondering if all this is true or was there some dramatic license taken here.

For a film that is as inspirational as it is thrilling, this film cannot be beat. We see that a series of ordinary men, women, and children, rose to extraordinary heights, each of them being a stand-in for the God to whom the psalmist prayed during a period of extreme need. Each of them, along with Jan, whose motto might well be “Never give up,” kept alive the beacon of hope during the dark period of Nazi domination. The end titles inform us that justice did at last catch up with the man who conceived “evil, and was pregnant with mischief, and (who brought) forth lies.” Jan Baalsrud returned to his native land, proclaiming that a all the suffering and struggle of so many was not in vain. And he always insisted that the real heroes of his story were the people who risked everything on his behalf.

When during WW 2 the other 11 members of Norwegian Jan Baalsrud's commando squad are killed & captured, he is aided by a large numer of his countrymen in eluding the relentless hunt for him by the Nazis.
Editor Rating ★★★★★4.5 out of 5
More Details