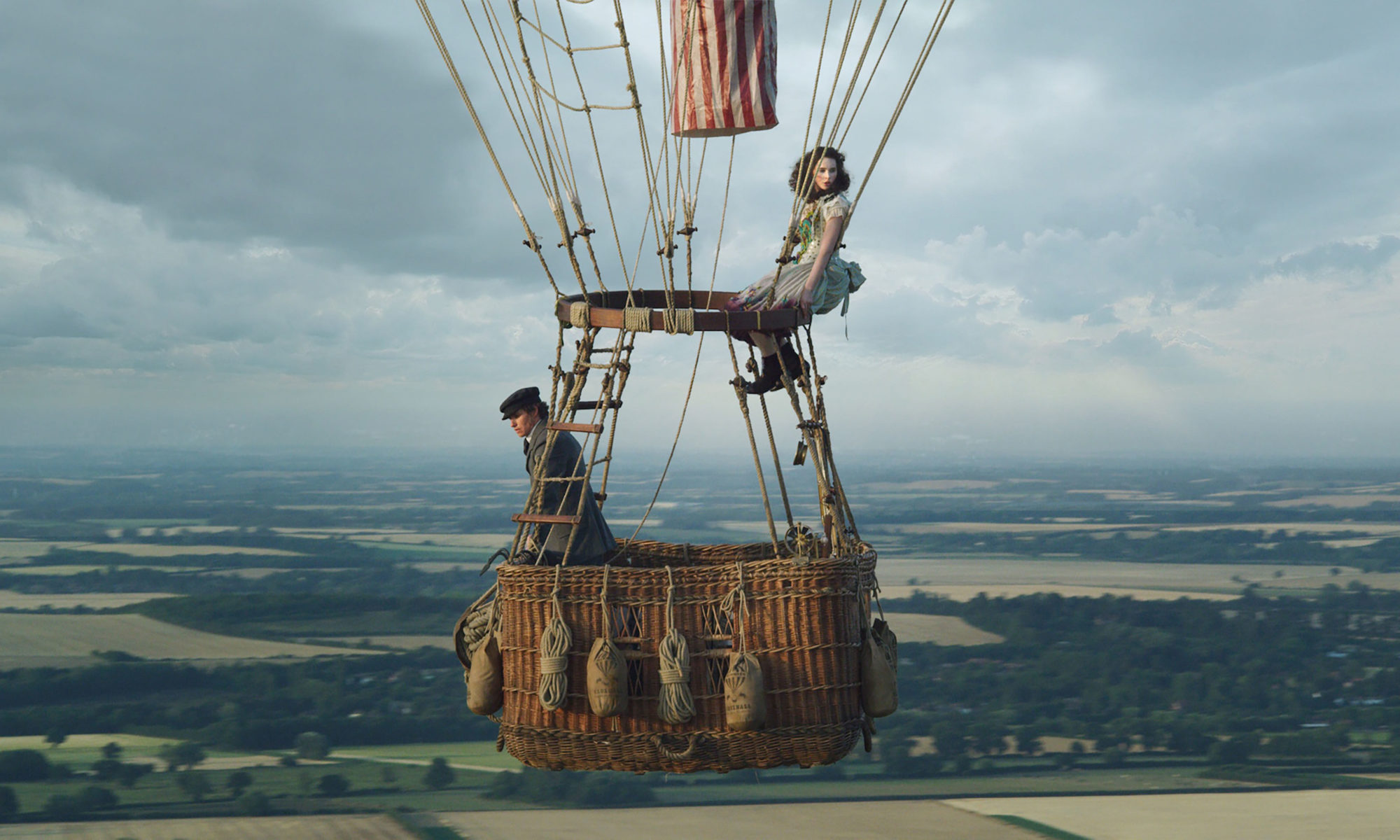 Eddie Redmayne and Felicity Jones in THE AERONAUTS Photo: Courtesy of Amazon Studios

And I say, “O that I had wings like a dove! I would fly away and be at rest.

Before there were aviators, there were aeronauts. Director Tom Harper, who gave us the tuneful film about a talented Sottish woman eager to sing in Nashville, Wild Rose, takes us back to 1862 when two English aeronauts ascended to a record height not surpassed until almost 70 years later. In co-writer Jack Thorne’s script one of the aeronauts is a real person—meteorologist James Glaisher, played by Eddie Redmayne—whereas one is entirely fictional, pilot Amelia Rennes, portrayed by Felicity Jones. Poor Henry Coxwell, the real pilot who saved Glaisher’s life during the record ascent is left out entirely. I presume that it is the entertainment value of showing a feminist pioneer reach great heights (literally) when patriarchy reigned in society that the change was decided upon.

A large crowd awaits in a grandstand the arrival of Amelia, her fellow aeronaut anxiously consulting his watch as he notes her tardiness. When she finally arrives it is as if she were entering a circus big top—she stands atop her coach in a short entertainer’s dress, vaults off onto the launching platform, and turns several cartwheels, much to the delight of the audience, and climbs into the gondola with her pet dog. Soon she and her annoyed partner are aloft. A few hundred feet up, she tosses the pooch out, to the horror of the crowd, but all is well, a parachute quickly opening that lowers the little creature safely to earth. Amelia is a born entertainer!

As they rise high above the rooftops and spires of London, their progress followed by many equipped with telescopes and binoculars. James asks her if she takes anything seriously, an answer he will soon receive by her brave action. As they rise higher and higher, James drops passenger pigeons with notes of their altitude. They experience a moment of wonder when they pass through a large cluster of butterflies.

They rise into the clouds where they are dangerously buffeted about amidst a thunderstorm, By now Amelia has changed into a more fitting aeronaut’s uniform that includes pants. As the temperature drops, it becomes evident that the one bit of apparel they should have brought are pairs of gloves. They argue about whether they should continue to rise or return to earth. During the spectacularly beautiful aerial scenes are several flash backs that fill us in a little on the backgrounds of the odd couple—he of wanting to explore the upper atmosphere because of ridicule from fellow scientists over his belief that weather prediction could become a useful scientist, and she as a widow getting over the death of her aeronaut husband.

In the thin air several miles above England the temperature drops to 5 degrees. The air has turned to snow, a blanket covering the huge balloons and coating the ropes connecting it to the gondola. Glaisher, starved for oxygen slumps to the floor. When Amelia pulls the cord to open the valve that allows the gas to escape, nothing happens. Everything is frozen together. Their altitude, an estimated 37,000 feet is the highest that any human being has ever attained, and they are still rising. The only hope is for Amelia to climb the rope ladder and release the panel at the top of the huge balloon. This sequence, with the woman in constant danger of falling off or letting go because of her frost-bitten fingers can barely hold on, is a spectacularly thrilling one.

The wonderful reproduction of Victorian London and the gadget filled chamber where the balloon is being assembled are fascinating, and the awesome views high above the earth are truly memorable. The chemistry between the stars, so evident in The Theory of Everything, is repeated, combining with the theme of a woman asserting her right to excel in a patriarchal world that would have preferred her to a domestic life—all this make the film a worthwhile cinematic experience, even though historical accuracy is sacrificed.

In this account of the 1862 balloon flight that set a world altitude record for many decades, one of the areonauts is depicted as a woman.
Editor Rating ★★★★★4 out of 5
More Details