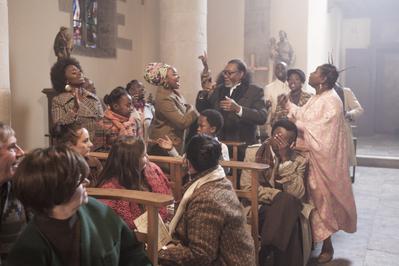 Then Jesus told them a parable about their need to pray always and not to lose heart.  He said, “In a certain city there was a judge who neither feared God nor had respect for people. In that city there was a widow who kept coming to him and saying, ‘Grant me justice against my opponent.’  For a while he refused; but later he said to himself, ‘Though I have no fear of God and no respect for anyone, yet because this widow keeps bothering me, I will grant her justice, so that she may not wear me out by continually coming.’”

French director Julien Rambaldi’s true story about freshly graduated Dr. Seyolo Zantoko (Marc Zinga) reveals that racial prejudice is not just an American or South African concern. Even in France, to which so many African American singers and musicians once fled for refuge, there are pockets of racism. Although in cosmopolitan Paris blacks were accepted and honored for their gifts, in many rural areas the prevalent view of blacks was of suspicion and hostility. And it was to Marly-Gomont, a small village north of Paris, that Dr. Zantoko moved his family to take up the post of resident doctor, a place whose inhabitants had never even seen a black person.

Dr. Zantoko had turned down an offer to become the physician for the dictator of his native country (Zaire) because of the corruption of the government, so he badgers the Mayor (Jean-Benoit Ugeux ) of the town, who has come several times to the medical school to recruit a doctor, to hire him.

When he succeeds and calls his wife Anne (Aïssa Maïga) back in the Congo to announce his good news, she mistakenly thinks, midst all the rejoicing of her family, that she will be living in Paris. Not only is she discouraged as they trudge toward the small village that will be the family’s home–they have a daughter and a son, Sivi (Médina Diarra) and Kamini (Bayron Lebli)– it is raining on them. Her husband sees this as the only way to escape having to live under a dictatorship in Zaire, his dream being that they can become French citizens living in freedom and safety.

As they are arriving many of the villagers eye them with both suspicion and hostility. They have long desired a resident physician so they would not have to travel to a distant doctor, but not a doctor like this one. They rebuff all attempts of Seyolo to reach out to them, and the children are mistreated in school by their classmates. Anne feels totally isolated, no local woman willing to befriend her. She revels in the visit of their extended family, many of whom live in Brussels and are willing to drive the distance for an occasional visit.

With no patients and thus no income, the doctor is desperate to connect with the villagers. He hangs out at the local watering hole, learning to play darts so as to fit in. Telling Anne that he does have patients, he leaves home, not for his office, but for a farm where he works as a hired hand. He ignores his children’s plight at school, and later when Sivi proves to be a talented soccer player, he forbids her to play because he thinks the game is frivolous.

How his perseverance and her marvelous skills on the soccer field win over the villagers is a delightful, sometimes funny story. And then, when all problems seem settled, one further problem arises—just a short time before they are to become citizens the government wants to deport the family. An added note of humor to this is that many villagers are as eager to retain Sivi because she is the key for their hope for victory in an upcoming tournament as they are to hold onto their doctor.

This could have been a heavy social justice film, but director Julien Rambaldi and his co-writing team of Benoît Graffin and Kamini Zantoko decided upon a much lighter touch. Kamini is indeed the doctor’s son, apparently a generous person in that he lets his sister’s story overshadow his in the film. One scene that stood out for me is set in the church at Christmas time. In the local church the Zantokos sit in the back pew and sing along with the congregation “Silent Night.” On the second verse the African pick up the tempo and clap along, the song becoming much more joyful. The priest is taken aback, but one lady, pleased, smiles and starts to clap, but stops when the others stare at her with reproachful eyes.

Dr. Seyolo Zantoko proves to be as persistent as the widow in Jesus’ parable. It would have been understandable if he had condemned his tormentors, declare that the village didn’t deserve him as their doctor, and gone off to Brussels to be with extended family. His is the way of Gandhi and Martin Luther King, Jr.—destroy an enemy by making him or her a friend.

This is one of the many films that add to the value of your Netflix subscription!

When an African doctor comes to work in a French village he has to struggle against racial prejudice before he & his family are accepted.
Editor Rating ★★★★★4.5 out of 5
More Details