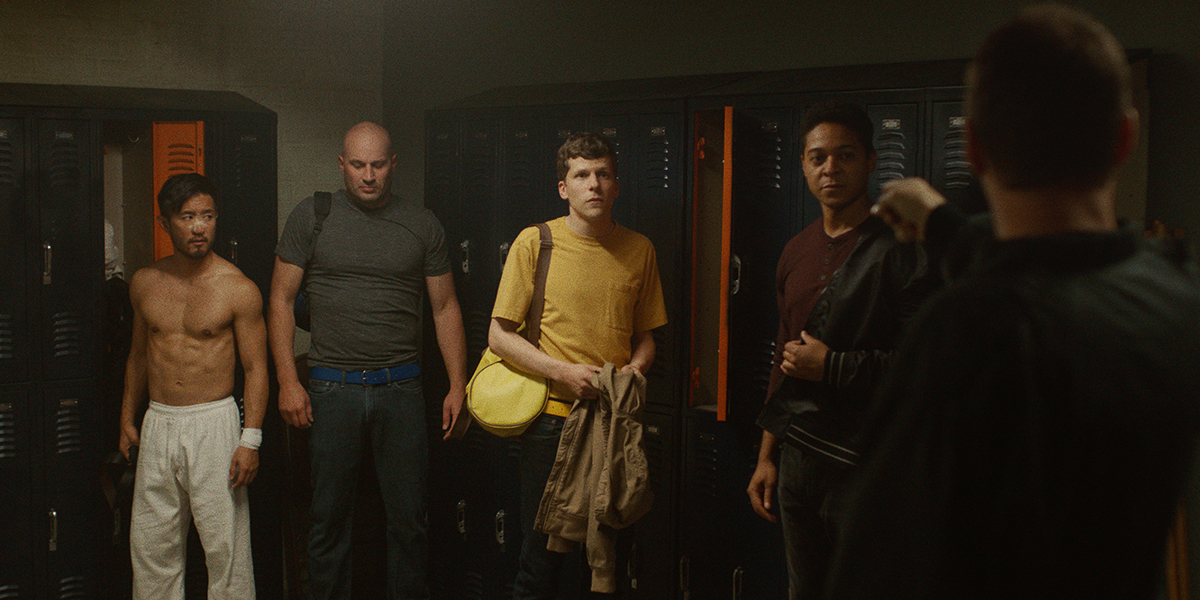 Therefore pride is their necklace;
violence covers them like a garment.

I can see writer/director Riley Stearns’ martial arts film becoming a cult movie, with its quirky characters and violence—especially with  the likable Jesse Eisenberg as Casey, a timid bookkeeper. Although, like the movie that some will think of when they see this one, Fight Club, it is too violent for my taste and seems to take place in some universe in which men disappear with no consequences, such as curious police detectives snooping around. Nonetheless, I found it fascinating as a satirical examination of toxic masculinity and a story of a journey from non-entity to assertiveness, though not a journey that anyone believing in love and compassion would want to embark on.

Casey, a nerdy accountant, is attacked on the street at night by a motorcycle gang. Once he leaves the hospital he is so fearful that he does not leave his apartment, not even to go to work. When he does venture out and tries to purchase a gun, he is told he will have to wait for a background check. He comes upon a martial arts studio wherein Anna (Imogen Poots) is teaching a children’s class. He introduces himself to the head instructor who goes by the title Sensei (Alessandro Nivola). He observes, “Casey. That’s a very feminine name.”

Coming back for a free introductory session, Casey soon learns that he will have to purge any trace of softness or compassion if he is to please his hard nosed mentor. Sensei often calls his class to look at the portrait of his own mentor placed prominently on a wall as he brags, “He poked through his opponent’s head with his index finger. He was the greatest man who ever lived.” The grand master had died when he confronted a man armed with a gun. Thus Sensei tells the class that a gun is for the weak.

Once Casey has donned his white karate outfit and attended several sessions, he begins to gain self-confidence, though he is still victimized in a parking lot incident. Casey yearns to advance to the next belt color, signifying his growing skill in martial arts. He is thrilled when Sensei invites him to join the ultra-scret night class, made up of worshipful fanatics who see karate as a means of gaining power. Sensei is definitely not from the same mold as the gentle Miyagi of The Karate Kid!

One of the night class chosen is brown belt Annathe, the only female among the fanatics. She joined the dojo at its opening, and is more skilled than the male whom Sensei places ahead of her. She seethes with resentment over Sensei’s choosing another  over her for the coveted black belt. Like a volcano, she will explode later on.

Casey is led to completely change his life, Sensei ordering him, “From now on, you listen to metal. It’s the toughest music there is … everything must be as masculine as possible.” Even at his favorite café he tells the barista, “I’ve got a new usual. Coffee. Black. With nothing to eat.”  He must also switch his language studies to German instead of French because the Teutonic tongue sounds tougher than the soft syllables of French. His relationship to his boss, who has allowed him two months to recover, and his fellow workers changes drastically when his new aggressiveness leads him to punch them at the office. Fired, he gains a new job when Sensei hires him to take charge of the accounts of the dojo. Casey ingratiates everyone by ordering street-clothes bests the same color as their karate ones.

When our anti-hero discovers that he has been the victim of an elaborate plot, the movie devolves into a blood feast worthy of Tarentino, ridiculous enough I suspect to satisfy those looking for a new cult film. The showdown between Sensei and Casey involves a confrontation similar to one in the Indiana Jones movie depicting a face-off between Indiana and a massive sword-wielding opponent, both incidents eliciting laughter from the audience. After his vanquishing Sensei, Casey tells the students, “I didn’t play by the rules, but there never were any rules.”

This dark comedy of the absurd will be understood by those abhorring toxic masculinity and its corollary values of violence and cruelty as the satire that it is, but unfortunately others will enjoy it for the wrong reasons.

After his beating by a gang, the timid Casey signs up at a Karate school where the brutal master turns him into a macho man.
Editor Rating ★★★★★4 out of 5
More Details