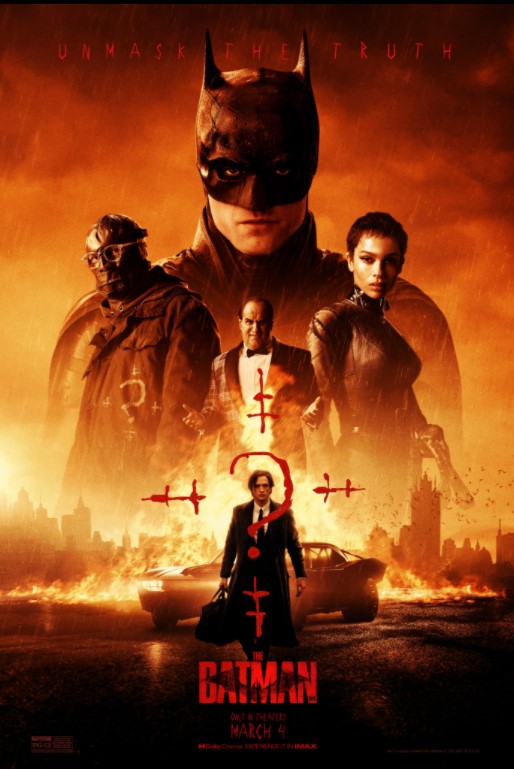 The way of the wicked is like deep darkness; they do not know what they stumble over. 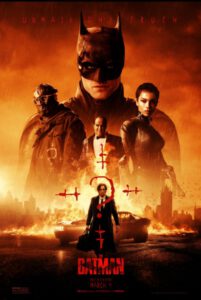 Director Matt Reeves and co-writer (with Peter Craig) have given us an almost three hours long story so dark that film noir looks like screwball comedy by comparison. Like that genre, this one begins narration by the main character (I won’t say “hero”) setting us up for a very, very complicated plot. Batman, aka Bruce Wayne (Robert Pattinson), has been fighting crime for two years in a Gotham that never seems to see sunshine, but the crime rate keeps rising anyway. Not that he would see the sun if he should venture forth during daytime. The Batman is a creature of darkness. “Two years of nights have turned me into a nocturnal animal,” he complains. More than one reviewer has compared the caped crusader to Taxi’s Travis Bickle.

Of course, Travis doesn’t have Bruce Wayne’s billions and his faithful and resourceful Butler Alfred (Andy Serkis) to equip him with a vehicle far more stylish than a taxicab. Nor was he ever up against such a paddy wagon-full of villains– crime boss Carmine Falcone (John Turturro), the Penguin (Colin Farrell), Oswald Cobblepot (Colin Farrell), and the a serial killer known as The Riddler (Paul Dano). As to the good guys on Bat Man’s side there is, besides Alfred, just one cop who believes in him, Lieutenant Jim Gordon (Jeffrey Wright), who lights up the night sky with the bat signal when in need. The others think the caped crusader is a dangerous vigilante who needs to be stopped.

Whereas Batman has been battling individual gangsters up to now, it is the Riddler’s hatred of corruption in high places that enlarges the crime fighter’s vision and scope of action. The Riddler kills the Mayor, and later the District Attorney because of their corruption. The arch criminal loves leaving clues that would stump a Times Crossword Puzzle champion. Bat Man figures them out even as they are read—what a Jeopardy champion Bruce Wayne would make!

Besides rain there are plenty of special effects-generated car chases and fights, all possible only in a comic book world. Best of all, there is Selina Kyle, aka Catwoman (Zoë Kravitz), once a cat burglar attracted to the masked crusader, and now his companion connected by her relationship to crime boss Carmine and her murdered roommate. She and Bat Man become so attracted to each other that when she decides to leave the foul city and start over somewhere, she invites Bruce/Bat Man to go with her. He is tempted, but he has vowed to bring better days to Gotham. For a brief moment the film becomes a star-crossed romance—and for once my cynicism about this series waned. I saw this film well over a month ago, but have felt it so inconsequential that I have kept putting off writing about it until I finished writing up the less-heralded films that present us with real people dealing with real issues in a real world.

I must amend the last statement by citing the one bit of wisdom contained in the film, when Batman says, “Our scars can destroy us, even after the physical wounds have healed. But if we survive them, they can transform us. They can give us the power to endure, and the strength to fight.” Not bad for a male adolescent fantasy film.

No set of questions for this film

Duty or love?--Bat Man fights super villains and the temptation to give up crime fighting for a life with Catwoman.
Editor Rating ★★★★★4 out of 5
More Details