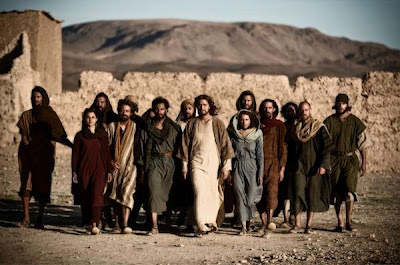 With the Fourth Week episodes I can say that the series has really hit its stride. There are still points of criticism, but when I compare last night’s two hours depicting the ministry of Christ to the other “Life of Christ” films, I must say this one holds up pretty well. During the first hour I thought the teachings of Jesus were overshadowed by his miracles—but then one of my favorite Jesus films, the animated so-called children’s film, is The Miracle Maker—and then in the last hour largely devoted to Jesus in Jerusalem, quite a number of teachings are worked in, from John’s gospel, as well as the synoptic gospels (Matthew, Mark, and Luke, for those who haven’t read much about the New Testament). At least they included his admonition to love our enemy, and the Beatitudes (see the opening verses of Matthew 5) were recited as Jesus leads his disciples on the road and then is seen teaching on top of a hill. 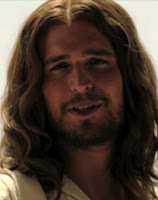 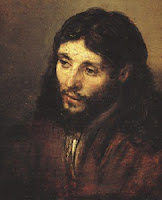 If they could not have found a Mediterranean actor, then the producers made a good choice of actor Diogo Morgado to play the crucial role of Jesus. Made up with a beard and long hair, it would seem that Rembrandt’s series of great portraits “The Head of Christ” was the model for Jesus. In the early scene in which Jesus heals the crippled man let down through the ceiling by his friends, Jesus’ smile is luminous as he bends over the man. His first statement that the man’s sins are forgiven outrages some of the pious onlookers. One man in particular (presumably a rabbi or synagogue leader who will reappear often as an accuser) draws the proper conclusion that Jesus must be claiming the prerogative of God, and therefore is blaspheming. Backing up his claim, Jesus orders the bedridden man to rise and walk—and he does. Throughout last night’s two episodes this Jesus is a very compassionate figure, very much in contrast to the angry, always in a hurry Jesus that Italian filmmaker Pier Paolo Pasolini depicted in The Gospel According to St. Matthew. 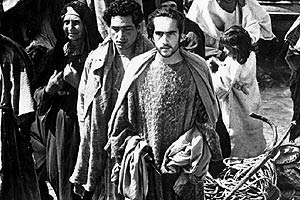 Jesus is often angry and in a hurry in Pasolini’s Gospel According to St. Matthew, like a revolutionary prophet.

I recall hearing just two of Jesus’ many parables, but the first one used—that from Luke’s gospel of the two men praying in the temple–was well used, reminding me of how creatively the parable of the Father and Two Sons (often reduced to “The Prodigal Son”) was placed in Franco Ziferelli’s great mini-series Jesus of Nazareth. In both films the parable was taken out of its gospel of Luke setting and used in a new context to make a point. In the latter’s film Jesus tells the story of an obedient and a disobedient son to bring the faithful Peter and his hated neighbor, the tax collector Matthew, together, each one seeing himself portrayed in the parable. In last night’s episode Matthew is also one of the characters, sitting at his table and collecting money. The Jewish leader whom we saw first condemning Jesus speaks scornfully of Matthew, whereupon Jesus tells the story of a Pharisee who offered up a boastful prayer about how good he was, followed by the tax collector who merely asked for God to be merciful to him, a sinner. Jesus, drawing out the moral that it is Matthew, and not his accuser, who is closer to God, directly calls out to Matthew to “Come” and join his band of followers.

The disciples themselves are not happy over a despised tax collector joining up with them—and this is another good point of the episode. Although only a few of them emerge as persons, they are not depicted as plaster saints, but as men (and a woman—to the producers credit they show Mary Magdalene in many scenes, her inclusion no doubt based upon Luke 8:1-3 where “other women,” two more by name, are said to have traveled with Jesus and provided “out of their resources” for their daily needs). My biggest criticism of the interchange between the disciples and Jesus is one of omission: when Jesus asks them who do they say that he is, and Peter gives the right answer, Jesus does not follow up by telling them that he must go up to Jerusalem and suffer the cross—nor is there the rebuke “Get behind me, Satan” when Peter contradicts his master. However, this theme is well handled when the crowd, fed the miraculous fish and loaves, starts chanting “Messiah!” Realizing that they mean by “Messiah an earthly king, Jesus is troubled by this. Eventually he makes it plain to his disciples that he will be a suffering Messiah, not an earthly king using violence to gain power.

One other deviation from the source that bothered me was Jesus’ observation that not one of the stones of the beautiful temple would be standing. For some reason they had Jesus make this warning to a child, not to his disciples who had been overly impressed with the magnificent building that Herod had built. What in the world would a child understand about this? In the gospels this prediction of the temple’s destruction is accompanied by a series of apocalyptic warnings about the end times, but this too is left out.

There is much more that could be said, including the most unusual shot of Jesus of any Jesus film that I have seen—a view of Jesus from under the surface of the stormy Lake Galilee—

but I will close with just three more observations:

Unlike the film known simply as Jesus, said to be the most viewed of any of the Jesus films because so many missionaries have been using it all over the world, this version clearly shows that the unlettered peasant from Galilee did pose a threat to Roman law and order. In several scenes we see how ruthless Roman Governor Pontius Pilate is, and how fearful the Jerusalem priests and Pharisees are that Jesus might disrupt the fragile peace then existing. The priests are well aware that their positions depend upon the good graces of the Romans. More than once Pilate threatens to close down the temple if there is any disturbance, so when Jesus shows what a large following he has when he enters the Holy City and then promptly upsets the tables of the money changers in the temple, the high priest is very anxious to remove the threat before the arrival of the biggest day of the year for the temple, the Feast of Passover.

The scene in which Pilate tells the crowd that they must pay for the aqueduct bringing water into the city was well done—until his soldiers bring out their concealed weapons and start slaughtering everyone. This unhistorical incidence of violence seems gratuitous, designed to appeal to the action movie lovers in the audience. However, in the Passover Eve sequence I was very impressed by the juxtaposition of the three prayers—Jesus’ at the Last Supper with his disciples; the Romans, Pilate and his wife, praying to their ancestors; and the anxious priests at the temple, ready to arrest and put on trial the usurper from Galilee.

The last observation actually stems from the reaction to last week, the depiction of Satan tempting Jesus in the wilderness. Until right wing columnist Glenn Beck’s observation, I had not noticed any resemblance between the Moroccan actor playing the devil and President Obama.  A second look, and I can see some resemblance, but I think Mr. Beck’s remark actually reveals more of his politics and his view of the President than anything else. Isn’t it interesting that this became the subject of so much speculation and discussion of a series whose producers were as surprised as anyone about this unintended consequence? 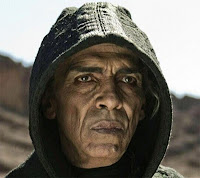 3 Replies to “The Bible, Fourth Week”