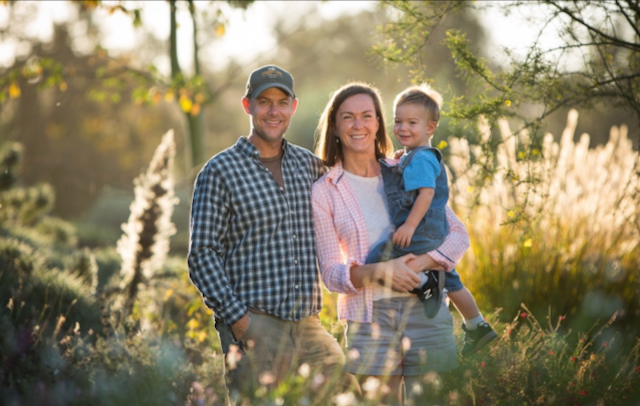 So God created mankind in his own image,
in the image of God he created them;
male and female he created them.
God blessed them and said to them, “Be fruitful and increase in number; fill the earth and subdue it. Rule over the fish in the sea and the birds in the sky and over every living creature that moves on the ground.”
Then God said, “I give you every seed-bearing plant on the face of the whole earth and every tree that has fruit with seed in it. They will be yours for food. And to all the beasts of the earth and all the birds in the sky and all the creatures that move along the ground—everything that has the breath of life in it—I give every green plant for food.” And it was so.

After so many gloom and doom eco-documentaries, this one about John and Molly Chester’s 200-acre farm north of Los Angeles might seem like a rainbow after a storm. The couple, with a great amount of help, in eight years create a lush farm in the midst of what seems like a desert. Their saga begins when the pair of urban dwellers  adopt a rescue dog they name Todd, and his incessant barking while they are away leads to their landlord’s evicting them from their apartment. Molly is an accomplished pastry chef and food blogger, and John a far-traveling documentarian, so they decide to chase their dream of an idyllic life on a farm.

No money? Tap into an extensive network of friends who come up with the necessary financing. Their next decision proves to be their wisest. Neither of them being experienced in agronomy, they hire expert Alan York as their full time adviser, whose motto for farming could be summed up in “Diversity! Diversity! Diversity!” With their own “can-do” outlook and his vast knowledge of nature, they set out to transform what appears to be a barren track of land into a lush oasis. However, they could not have picked a worst time for their venture, California suffering from what they call it’s “worst drought in 1200 years.” Just how bad the soil is Molly shows us by holding up a large clod of dirt as hard as a rock and then dropping it so we can see it hit the ground with a thud without breaking up.

Each of the years pass with new problems arising, and the couple and Alan coming up with solutions. Where to get the labor necessary to tackle the huge problems, such as the panting of the 10,000 fruit trees? We see a squad of volunteers who come from all over the US and numerous other countries. John, who narrates the film, does not tell us how they attracted such willing and able people, just filming them as they pitch in with their smiles and back-breaking effort. The water problem is solved by the installation of five miles of pipe and a huge deluge of rain fall that fills in their almost depleted aquafier. By the time of the rainstorm they have already planted the fruit trees (over 75 kinds—diversity!) and ground cover, so their soil, unlike that of neighboring farms, is not washed away to the sea.

They bring in hundreds of chicks, so that they are soon supplying fresh eggs to the area people willing to pay extra for eggs laid by “free range” hens. They also purchase a herd of sheep, a few head of cattle, and a sow named Emma. Her birthing scene provides a note of humor as John is surprised by what seems like an unending series of piglets emerging into his waiting hands—17 in all! The excrement from all of the animals in turn continues to enrich their land, already enhanced by earth worm-laden soil that they bring in, and the sheep even serve as lawn mowers by feeding on the plants between the rows of fruit trees.

As the farm becomes green and supportive of the domestic animals, new problems arise. Coyotes are drawn to the chickens, and snails multiply and crawl up the fruit trees to consume the fruit. Flocks of birds also swoop down to feed upon the fruit. With Alan’s wisdom problems are overcome one by one, but then a bigger problem arises—Alan has developed cancer and has to drop out of the project. Sometimes he can be reached by phone, but then he succumbs to the disease.

John and Molly are left alone to solve their problems, and so resort to the Internet and other reference resources. One dilemma they face when drought strikes the area is that their large flock of ducks are dropping so much waste into the pond that its enriched waters are producing algae that threaten to destroy it. The solution they discover is to drive the ducks into the orchards where they consume the snails threatening the trees, and their excrement greatly enriches the soil. Thus, John tells us, they gradually discover the complexity of the bio-system and the value of Alan’s motto of “Diversity! Diversity Diversity!” After eight years the farm has grown in fertility and its produce has enabled them to maintain a living.

The film is book-ended by scenes of the Chesters gathering up a few things in a rush because four different fires surround the farm, thus triggering a mandatory evacuation. Will all of their work of eight years be for naught? The picture of Nature is thus enlarged to include the effects of climate change that can upset all human a plans. Nature is far more complicated than they had anticipated.

The film provides a fascinating look at the complexity of nature and what humans can do in an attempt to live in harmony with it. It demonstrates both the problems—pests attacking the plants and animals and the benefits of good cultivation, the latter being swarms of bees that are drawn to the farm because of its many plants.

The necessity of perseverance and the need to work with others is well documented. No one can hope to succeed by themselves. The photography is outstanding, of National Geographic quality with many close up shots of honey bees; humming birds; herons in the pond; night shots of predators; drone shots of the contrast between lush green farm and the surrounding scrub country; and even of microbes busily enriching the soil. The many little stories of the farm animals—a greasy rooster becomes the companion of Emma, and when she becomes deathly ill, we are led to care for and root for her; and there is the presence of the pet dog Todd who enjoys the freedom of the farm—enrich the story of the efforts of the neophyte farmers. Theirs is a story that all of us city dwellers, whose closest contact with the growing of food comes from purchases made at a farmers’ market rather than a supermarket, should find inspiring.

This review will be in the July 2019 issue of VP along with a set of questions for reflection and/or discussion. If you have found reviews on this site helpful, please consider purchasing a subscription or individual issue in The Store.

John & Molly Chester with help from experts & volunteers restore a 200 acre farm north of L.A, to rich productive land despite problems.
Editor Rating ★★★★★4.5 out of 5