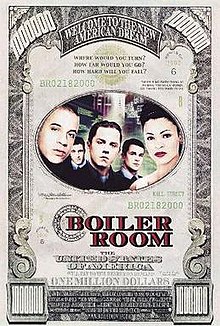 Honor your father and your mother...


But those who want to be rich fall into temptation and are trapped by many senseless and harmful desires that plunge people into ruin and destruction. For the love of money is a root of all kinds of evil, and in their eagerness to be rich some have wandered away from the faith and pierced themselves with many pains.


But when he came to himself... 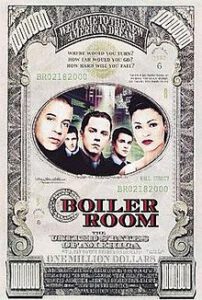 Seth Davis (Giovanni Ribisi) is a young Generation Xer wanting to please his harsh father and get rich quick, though not in this order. At the beginning of the film he comments on wealth and his peers’ rush to obtain it, “I just want in. There’s no honor in taking that after school job. No one wants to work for it.” The Protestant work ethic, joined with Ben Franklin’s advice to save and not spend, is totally alien to him. He wants to find the quick path to wealth, so he has dropped out of college to set up and manage an illegal gambling casino, at which he proves to be very good. But his father (Ron Rifkin), a judge, is appalled at the illegality of the enterprise.

Next Seth goes to work at the J.T. Marlin stock brokerage firm where recruiter Jim Martin (Ben Affleck) dazzles him with success stories of brokers who have become millionaires in less than a year. However, Judge Davis is unimpressed when he learns that the unfamiliar firm is located out on Long Island, not on or near Wall Street. Seth is too naive to see anything sinister in the address.

Judge Davis should be unimpressed, for J.T. Marlin is a boiler room, a fly-by-night outfit dedicated to parting the gullible, usually older clients, from their savings. Operating barely on this side of the law, the trainee, or “opener” as he is called, is relegated to making cold calls on potential clients, dangling before them the promise of quick profits on a new stock, and a supposed inside tip that the stock is going to skyrocket in value. Once the caller is sold on the stock, the opener turns the client over to a seasoned broker who clinches the deal. We see all sorts of high pressure, unethical techniques used to convince the potential client that this call is the opportunity of a lifetime to achieve that dream of a paid-up home or leisurely retirement.

Seth has to work under the disagreeable Greg (Nicky Katt), but the office hotshot Christ (Vin Diesel) takes him under his wing, showing him the ins and outs of persuasion. Seth even begins to date the firm’s receptionist Abby (Nia Long), despite company policy against this. He successfully passes his brokerage tests to become a license broker, and thus seems set on the road to wealth. But he is curious about how the firm can pay its employees so lavishly and still make a profit for their clients. He finds, of course, that this is impossible. When the client whom he has conned into diverting the funds intended for a new house is faced with ruin because of the tumbling value of the stock Seth has sold him, he is faced with a difficult decision. One made all the more difficult by a secret Federal investigation into J.T. Marlin, and the entanglement of his father in his illicit affairs. Judge Davis has already come to his decision concerning his relationship with his son, one that has a faint echo of the biblical parable of the Father and Two Sons (see Luke 15).

This is writer Ben Younger’s first script and first time at directing a feature film. A successful manager of political campaigns in New York, he decided to switch to film making. While working in the lower levels of the film industry he needed a job, so he joined a group of young adults being recruited to sell stocks in a boiler room. He became so fascinated with this scene that he spent a year interviewing and researching the subject, from which came this hard-hitting script. “The Boiler Room” could be pitched as “Glengary Glen Ross” meets “Wall Street,” both films having inspired Younger. This is a film that instructs and warns, even as it entertains us, so much so that a recent issue of the AARP’s Newsletter referred extensively to the film as a good way for older people to learn about the growing attempts to deceive them with promises of fast and easy money. The stock market has been on such a high, with thousands of Americans becoming paper millionaires by the growth in stock prices, that it is relatively easy for a smooth, fast-talking salesman to convince people that they too can share in the wealth.

Along with an inside look at a shady operation, Ben Younger gives us an engrossing variation on the age-old conflict between father and son. By the end of this film both have grown considerably, the father into relinquishing his harsh law-based perfectionism and opening up to the joy that a relationship based on grace can bring. And Seth discovers the wisdom contained in the advice of the author of the New Testament book of  I Timothy  to a young man long ago  (“the love of money is the root of all evil”)–even though Seth himself may never read this ancient epistle.

The son of a judge wants to make money by conning investors in a" boiler room" but comes to an awareness of his wayward ways.
Editor Rating ★★★★★4.5 out of 5
More Details