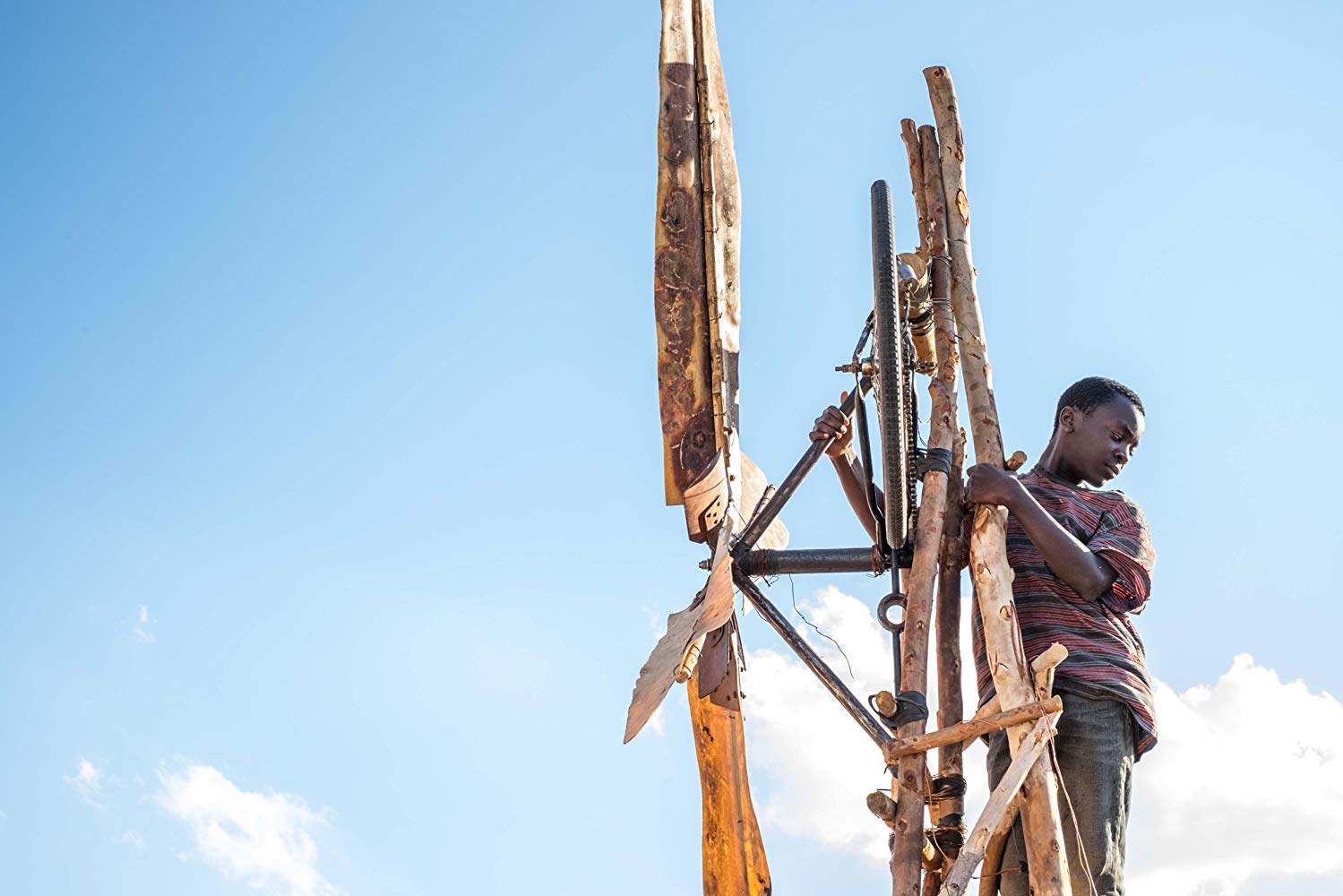 Children, obey your parents in the Lord, for this is right. “Honor your father and mother”—this is the first commandment with a promise: “so that it may be well with you and you may live long on the earth.” And, fathers, do not provoke your children to anger, but bring them up in the discipline and instruction of the Lord.

Chiwetel Ejiofor  makes his debut as writer-director in this true story set in Malawi during the period of the attack on the Twin Towers. It is based on the 2013 memoir by the Malawian engineer William Kamkwamba, reminding us that courage and perseverance joined with scientific curiosity can change the world, or at least a small part of it.

In 2001 William (Maxwell Simba) is 13 years old living in a farming village. His father Trywell Kamkwamba  (Ejiofor) is disappointed that his recently deceased older brother has not left some land adjacent to his own small farm that he had hoped to inherit. Survival on land that is flooded during the rainy season and dry and dusty the rest of the year is difficult. Matters are made worse by the large tobacco companies that are buying up land so they can cut down the trees for fuel. The roots have held the soil together, protecting it against the floods. Times have grown hard as each year the rains come later and later. Many farmers, including his surviving brother, are selling their land because the government has ignored their plight, despite Trywell’s pleas and warning about possible flooding. Sure enough, when the rains come, his small crop is wiped out by the run-off water no longer absorbed by the tree roots.

Following this, a long dry spell sets in. The family’s well provides water for their personal use, but the field beside their house is powder dry. To make matters worse, the 9/11 attack has upset the world economic order, and to raise needed revenue the government is confiscating and selling the crops overseas. The people are growing hungry, and what food that is available is now far more expensive due to the increase in prices.

The villagers meet with their chief and ask that he plead their case when the president comes for a political rally. It is election time, the only time when their government officials seem to care about them. The old chief does speak at the rally, hinting that his village’s vote depends on getting government aid. The politicians on the platform are so upset that the president orders his bodyguards to escort the chief off the platform. Out of sight of the crowd, the goons beat and kick the old man so severely that he will hover between life and death for weeks to come.

Earlier in the film we saw that William has a gift for electronics. Scavenging in the town dump, he gathers up old batteries, discarded radios, a broken pump, and other discarded gadgets. At home he has restored so many radios and cassette-radios that villagers come to him to repair their radios. It is while listening to a radio that he and his friends hear the announcement of the ramming of the twin towers. However, this scarcely fazes the boys, who change stations so they can listen to a soccer game. (What a subtle debunking of our America-centric delusion that the whole world was as transfixed by the attack as we were!)

William attends the local school, and his older sister Annie (Lily Banda) hopes to go to college, but Trywell must spend their meager store of money on food rather than on tuition. With William’s father unable to pay the tuition, the strict headmaster tells the boy that he can no longer attend.

William has been fascinated by a gadget on science teacher Mr. Kachigunda’s (Lemogang Tsipa) bicycle, the wheel-powered dynamo that generates electricity for the bike’s headlight. He also has spotted late at night the teacher meeting secretly with Annie, so he uses this knowledge to force the man to allow him to sneak into class and sit at the back of the science class. The two of them also persuade the school librarian to permit the boy to use the books and science magazines of the small library and to keep this secret from the principal.

Gaining knowledge of how a dynamo might work to generate power, William longs to get his hands on Mr. Kachigunda’s dynamo. Annie sacrifices herself for this, agreeing to run away with the teacher to get married if he will turn over his bike to her brother. Although this leads to the boy acquiring the dynamo, it also results in his expulsion from school. Who should be the substitute teacher than the principal? He is extremely displeased to find William sitting in the back of the class.

With the help of best friend Gilbert (Philbert Falakeza) and others, William makes a model windmill to which he attaches the wheel-powered dynamo. To their joy it brings an attached radio to life. Now to the building of a full-sized windmill that can power the salvaged pump. This is when Trywell’s pride and stubbornness thwarts the boy’s plan. Life in the village has deteriorated daily, with food riots, thefts, and the old chief finally succumbing to his injuries. People are leaving or dying from hunger. Feeling shamed and helpless that he cannot feed his family, Trywell becomes so angry with his son’s arguing for a seemingly impossible plan that he smashes the model windmill, destroying the dynamo in the process.

William is crushed by this outburst and the loss of his mechanism. There remains just one dynamo left in the village, and that is on his father’s bicycle. Thus, this is not just the story of the mechanical genius of an adolescent African boy. It is also a father-son tale, and one that reflects the generational conflict amidst tremendous change in belief and practice taking place in Africa. We see the old way of life in the costumed Gule Wamkulu, masked dancers who are believed to help spirits into the afterlife. At the beginning of the film they perform at the edge of the crowd at the funeral of Trywell’s relative, and also near the end, at the funeral of the village chief. The old way dictates also that a father, not a son, has the authority, and presumably the knowledge and wisdom, to make all the decisions of a family.

In contrast, we see the new in that the first funeral was presided over by a Christian minister, and prominently hung inside the Kamkwamba’s home is a large cross. The Gule Wamkulu are close by, but kept at a distance from the Christian burial ceremony. During the terrible drought when Trywell starts to pray at a family meal for rain, wife Agnes (Aïssa Maïga) interrupts, reminding him and the surprised children that they are now a modern family that does not belief that magic can bring rain.

It will be Agnes who overcomes Trywell’s stubborn refusal to listen to William. Her name might mean “lamb,” but she does not act like one at this point. The rousing conclusion with the villagers cheering our young hero will undoubtedly gladden your heart also. (Were you watching this in a theater, the audience would be cheering.)

This is a perceptive film that takes us outside our own land and culture, broadening our perspective, and yet assuring us that such basic values as love, courage, and persistence are universal. The characters switch back and forth between English and Chichewa, but I urge you not to shy away from the film because of its subtitles. Chiwetel Ejiofor proves he is as talented behind the camera as well as before it. This Nigerian is one of Africa’s greatest and most welcome exports. This film alone is worth the Netflix subscription price.

The son of a poor farmer in Malawi must struggle against his father & other odds to bring water to his drought-stricken village.
Editor Rating ★★★★★5 out of 5
More Details