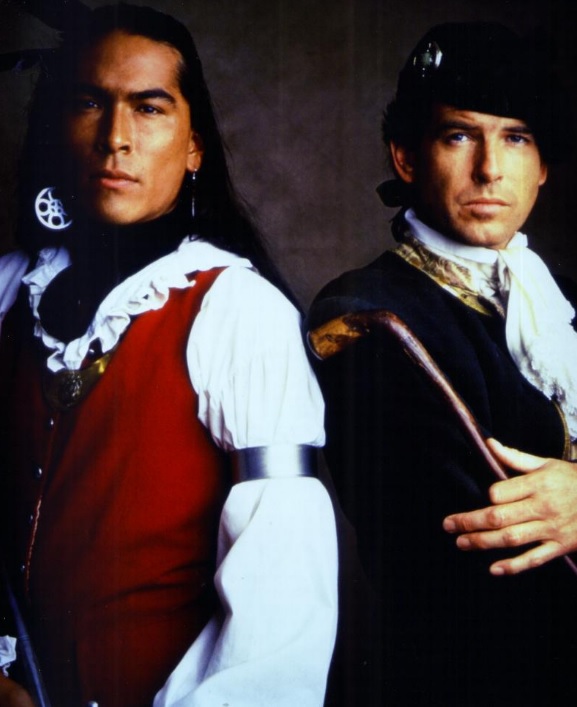 Happy are those who find wisdom,
and those who get understanding,...
Her ways are ways of pleasantness,
and all her paths are peace.

Director Lamont Johnson’s film gives us a different perspective on Native Americans and the American Revolution in this cable film about the Iroquois Confederacy. The Five Nations, as they were sometimes called, consisted of the Oneida, Onondaga, Cayuga, Mohawk, and Seneca tribes, and were spread across central New York and Pennsylvania. The film originally was aired on TNT in 1993. Somehow, I missed it, so I am again grateful that someone posted it on YouTube.

The plot is complicated, spanning several decades, from the French and Indian Wars to the American Revolution, so I will not go into detail on it.*

The film’s title refers to the broken chain of peace that the Confederation had enjoyed since their legendary founder the Peacemaker had brought the tribes together hundreds of years earlier. He had warned them that if ever the nations fought against each other, disaster would befall them. As the French and British struggle against each other, each seeks the Iroquois to support their side. Later, when the American colonists revolt against the British, the two sides again appeal for the support of the Confederacy. The two principal warriors, Theyendangea (aka Joseph Brandt, played by Eric Schweig) and Lohaheo (J.C. White Shirt) who regard each other as brothers, split over this, Lohaheo wanting to stay neutral, and Brandt, swayed by his British mentor Sir William Johnson, as well as upset over the racism of the colonists, wanting to join the British.

Because of the prejudice and brutal acts of the Colonials, some of the tribes do support the British, and others the Americans. The Council of Clan Mothers had advised the men to stay neutral, but passions ran too high. The Iroquois divide into warring factions, and the disaster promised by the Peacemaker descends, the tribes losing their ancestral lands to the encroaching Americans.

Much of the story is narrated by the Iroquois warrior Theyendangea, who later adopts the name Joseph Brant. Of a mixed bloodline, he catches the eye of the man the British put in charge of Indian Affairs, Sir William Johnson (Pierce Brosnan), whose stately home becomes a gathering place for many of the Iroquois. He has taken a Native American wife and has become very trusted by the Iroquois. He even sponsors Brandt’s education in far off Connecticut with a Loyalist. When Joseph returns, garbed in the clothes of a white man, he is slow to recognize Lohaheo, but then they do embrace. Clan Mother Gesina (Buffy Sainte-Marie) warns him about his British education, “You must be careful not to become so fond of their ways that you ever forget who and what you are.”

Gesina is especially of interest, her office in the Confederacy revealing that these Native American women played a far greater role in public life than any colonial woman could hope for. Although, as in other tribes, the chiefs and warriors were men, it was certain respected women who inherited the office of Clan Mother, who formed an inter-tribal council. It was the clan mother who chose the chief and with whom the chiefs conferred about important matters, including going to war. When Joseph becomes a chief and an invitation arrives from the Continental Congress for the Confederacy to send representatives, he is one of those whom the women appoint.

Another character appearing several times is Ben Franklin (John Hagadorn) who is so impressed by the Confederacy that he adopts some of its governing ideas. In one scene he demonstrates to his colleagues, fearful of the might of the British Empire, the weakness of one arrow as compared to the strength of a bunch of them held together, the bundle representing of course a united 13 colonies. This is a repetition of what the Iroquois had said of their own united confederacy.

Although relatively short, this film nonetheless packs a lot of history into its hour and a half. Although much simplified, the events unfold pretty much in accord with the historical record (at least as far as I was able to fund out on Wikipedia). Because it’s told from the standpoint of the Iroquois, we get a very different perspective of the origins of our nation. Watching it is similar to viewing The Book of Negros, the fascinating and little known story of American slaves who took up the British offer of freedom if they fled their colonial masters and joined the British army. Both films show what a mixed affair the founding of our nation was, a real mixture of the just and the unjust. A good example of the latter is the killing of Chief Seth (Wes Studi) by white squatters who had crossed into Indian territory despite a treat that forbade this. When Sir William comes to offer condolences, she bitterly reminds him that the whites have violated the treaty, and he responds that there is nothing he can do. She herself dies a little later, her last thought being that the nations must not be divided. Joseph Brandt after the rebels, against his expectations beat the British, winds up with his people in Canada. He is sadder but wiser for having trusted any white man to keep his word. In what amounts to a coda we see that the traditional form of governing is still observed by the Iroquois descendants still living in New York.

The producers of the film should be commended especially for their casting, choosing Native Americans—oops, I should say Indigenous, Buffy Sainte Marie, Eric Schweig, and Grahame Greene being Canadian cast members– to portray many of the characters. All turn in such excellent performances that you will have no hesitation in rooting for the Iroquois, even when they are up against those we regard as patriots. This is an overlooked film not to be missed, especially since it is available for free on YouTube.

*IMDB doesn’t offer much, so if you want to see a synopsis before or after watching the film, go to: http://www.vernonjohns.org/snuffy1186/brkchain.html

This review is in the August issue of VP along with a set of questions for reflection and/or discussion. If you have found reviews on this site helpful, please consider purchasing a subscription or individual issue in The Store.

The complicated story of Iroquois Chief Joseph Brandt, his mentor Sir William Johnson, & the Iroquois Confederacy during the French & Indian & the American Revolutionary Wars.
Editor Rating ★★★★★4 out of 5
More Details