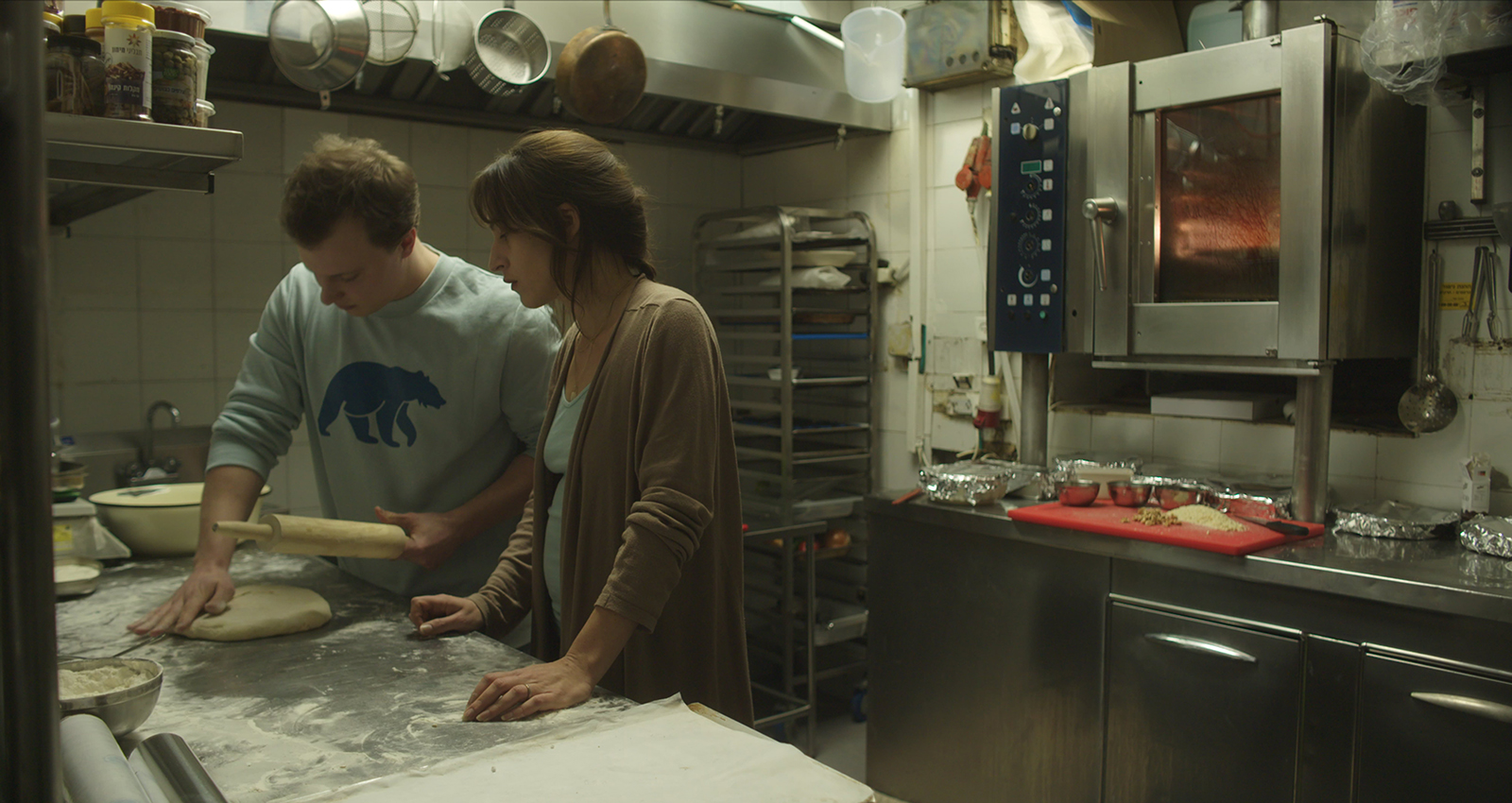 Then the Lord God said, “It is not good that the man should be alone. I will make him a helper as his partner.

In Berlin Israeli city planner Oren (Roy Miller) has become more than friends with Thomas (Tim Kalkhof), the talented baker at the small café where they had met. While eating the baker’s delicious Black Forest gâteau, Oren seduces the young German. During his monthly visit the pair bed down together. Although he has a wife and young son, the bi-sexual Israeli has set up a second home with his German lover, even talking about moving to Berlin. Each time he returns to Jerusalem he takes a small package of cinnamon cookies for his family. At first glance one might think writer-director Ofir Raul Graizer’s first film is a bit lurid or sensational, but it is not, the slow-paced film instead being about grieving, loneliness, and the fluidity of sexual boundaries usually thought of as rigid.

When Oren fails to return to Berlin and does not answer any of his calls or text messages, Thomas is upset, and then is thrown into the pit of grief when he learns that his lover has died in an auto accident. He buys a one-way airline ticket and is soon in a Jerusalem market at the same moment that Oren’s widow Anat (Sarah Adler) is shopping. He visits the Kosher restaurant she owns, but does not mention his connection with Oren while talking with her. She turns down his request for a job—we presume that it is because of the few customers that we see in the restaurant—but changes her mind the next day when she has to dash off to see about her son.

Thomas decides to do more than the dishes and clean-up, baking several trays of his savory cookies. He is surprised, when she returns with her brother-in-law Motti (Zohar Strauss), that the pair reject his cookies because his baking them in her oven violates Kosher law and could put her Kosher certification in jeopardy. However, after Motti leaves, Anat, who is a non-practicing Jew, stops Thomas from trashing the cookies, telling him they are very tasty. At first leaving Motti in the dark, he bakes more cookies and cakes for sale at the café, and word apparently spreads quickly, for now the small café is filled with customers eager to consume the sweets. She begins to receive phone calls to cater events.

The Orthodox Motti remains suspicious of Thomas, while at the same time concerned that the foreigner is all by himself. In compassion he drops off some food in Thomas’s apartment (which he had obtained for him) and invites him to his home on the next Shabbat. Thomas accepts. At the supper, much of which we are shown from the outside through a window (nicely symbolic), the “sojourner,” as he would be called in the Torah books of Leviticus and Deuteronomy, is made to feel welcome. Thomas has also met Oren’s mother Hanna (Sandra Sade), who also proves to be welcoming. She seems to know that he has a connection with her deceased son, so we wonder if this is due either to a mother’s intuition or if Oren had shared something of his bi-sexuality and experience with her. Thomas also accepts Anat’s invitation to dine at her home, where he relates well to 6-year-old Itai (Tamir Ben Yehuda).

The themes of loneliness and grieving are well developed for Anat, as well as Thomas. She seems to have no social life outside her café and caring for her son. Thrown together daily in the café’s kitchen with Thomas, she warms to him. His lessons on kneading cookie and cake dough become sexually charged as their hands meet. Eventually she gives in to her aroused feelings, kissing him passionately. At first he, has resisted her opening up, but then he permits his repressed feeling to rise up, and they…

Of course, the truth of his past relationship with Oren comes out, with Motti’s anger inflamed. Most of what happens next can be anticipated, but the film’s conclusion concerning Anat is as surprising as it is ambiguous. Those who like all the loose ends of a film tied up neatly, beware, though optimistic lovers of romance can handle the ambiguity by imagining what the widow will do next.

The film seems to affirm God’s statement in Genesis, “Then the Lord God said, “It is not good that the man should be alone,” though there will be disagreement as to what constitutes a proper “helper and partner.” All three Israeli adults feel compassion for the lonely German, even the Orthodox Motti who is anxious that the Gentile baker might ruin Anat’s restaurant’s Kosher standing with the all-powerful Orthodox rabbis. As with so many other films, it is significant that their compassion is expressed through food. This should not be surprising to the adherents of t wo of the Abrahamic faiths, celebrating their freedom from slavery by the annual Passover meal, and Christians each time they share the bread and wine of Communion.

Jesus’ warning that what we cover up will be revealed unfolds when Anat’s search through her husband’s effects leads to the discovery of the bond between her new lover and her deceased husband. Who wouldn’t be upset by such deception, with Motti serving as her agent of Thomas’s banishment. And yet love is more powerful than hurt and anger, so we are left to speculate. Like the director of Puzzle, Marc Turtletaub, Ofir Raul Graizer refuses to tell his audience everything but respects its members to reflect upon and figure out his film’s resolution for themselves. These are two fine independent films well worth the effort in tracking them down!

A Berlin baker, discovering his Israeli male lover has died, moves to When Berlin cakemaker Thomas discovers that his Jerusalem male lover Oren has died, he travels there &, keeping his past relationship secret, goes to work at the widow's cafe, with unforeseen consequences to all.
Editor Rating ★★★★★5 out of 5
More Details