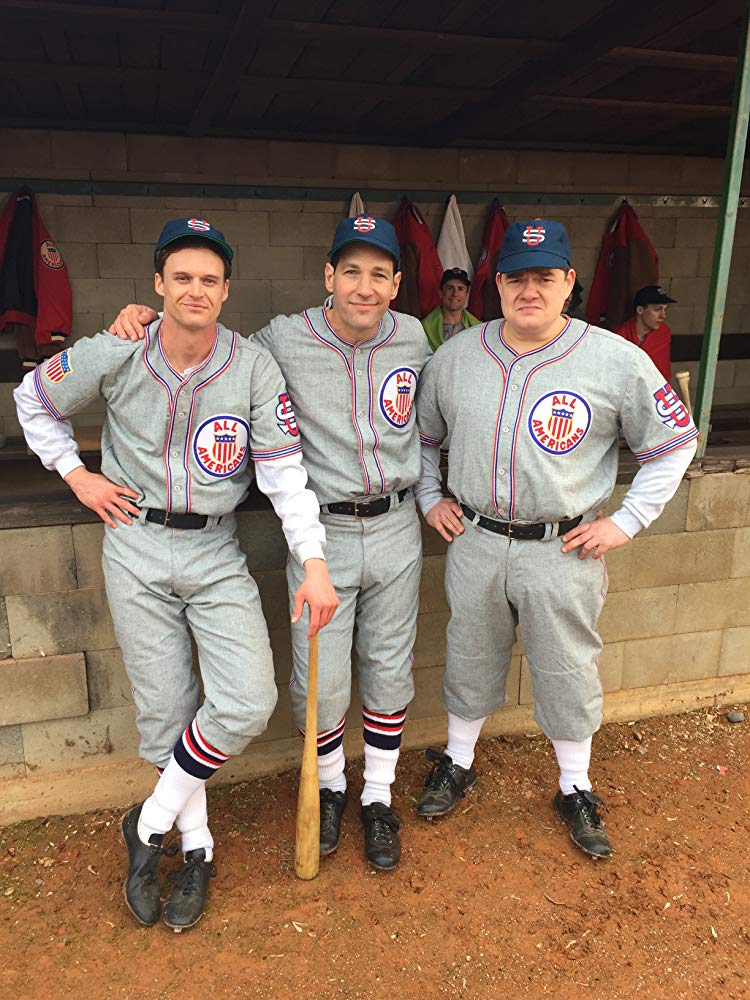 Director Ben Lewin’s film is a variation of the standard WW 2 and spy genres, centering on an outsider who says he feels a sense of belonging in just two places—a library and a baseball field. His protagonist is the real-life baseball player Morris “Moe” Berg, the script based on Nicholas Dawidoff’s book of the same name.

Moe (Paul Rudd) was the catcher in the 1930s for the Boston Red Sox. As a non-practicing Jew at a time when anti-Semitism was about as widespread as prejudice against blacks, he also is plagued by the suspicion that he is a homosexual, something that is more than hinted at in the film. He also does not fit in with the team because of his degrees from Princeton, Columbia, and the Sorbonne and his ability to speak more than half a dozen languages—his teammates dub him “The Professor.” He even takes part in a quiz show broadcast over the radio.

Moe is unmarried but in a relationship with Estella (Sienna Miller), with whom he enjoys vigorous sex, but, although she would make their relationship legal, he keeps her at arm’s length. She is deeply disappointed when he refuses to take her to Japan when he is named to an All-American team that will engage in a series of exhibition games in that baseball-loving nation.

He enjoys playing ball in Japan, off the field entering a relationship with Japanese scholar Kawabata (Hiroyuki Sanada), who confirms his premonition that Japan and the United States are doomed to go to war against each other. Dressed in a Japanese robe, he goes to the roof of a hospital and with a 16mm camera films Tokyo harbor, its ships, and military installations.

Back in the States, after Pearl Harbor, he learns from a friend about the Office of Strategic Services. He takes his can of film and shows it to O.S.S. director William J. Donovan (Jeff Daniels). Donovan is impressed by the film and their interview, but, suspicious and worried, asks, “Are you queer?” Moe replies, “I’m good at keeping secrets.” Even the suspicion of such back then was enough to destroy a government career, but Donovon hires him anyway.

He chafes at being assigned to deskwork in the Balkans office, but just when he rebels, Donovan gives him a field assignment because of his fluency in Italian and German. He is told of the Manhattan Project and that Germany might also be attempting to build a nuclear bomb under the leadership of the Nobel physicist Werner Heisenberg (Mark Strong). He is introduced to physicist Samuel Goudsmit (Paul Giamatti), once a friend of Heisenberg’s. His assignment is to travel with Goudsmit and another agent to Rome (still in German hands but soon to fall), talk to an Italian scientist who also is a friend of the German, and then move on to Zurich where he is to lure Heisenberg there by a lecture offer. Once he hears and meets Heisenberg, he is to find out if their mark is working on an atomic bomb. If there seems to be the slightest chance that he is, Moe is to kill him.

The mission requires combat training and then joining up with front-line troops as they are advancing to the Eternal City. There is a combat sequence that I found exciting, even if many critics did not. Best of all was the scene in which Moe, his major league having ended, plays a ballgame with the soldiers. When one of them recognizes him, the others are filled with awe and delight to be playing with a major league athlete. It helps too that, despite his low batting average, he whacks a ball out of the rubble-lined field. For a brief period, the outsider is ”in” as the men eagerly gather around him, one of them asking that he sign the game ball. Nice touch.

The actual meeting up with Heisenberg in Zurich has all the suspense of a typical spy tale, even though we know the outcome. The visiting professor carefully avoids making any political remark both in the lecture hall and at the lavish dinner held in his honor at the host’s home. An ardent anti-Nazi woman tries to get him to comment on Hitler, but he declines, and the others shush her. Moe and the scientist engage each other over a chess board, and at the dinner table exchange chess moves, both apparently able to memorize the board. The German physicist excuses himself early; Moe, pistol cocked, follows him onto he dark street, and…

As the critics have noted, Moe Berg remains an enigma at the end of his film—I was especially curious about the inclusion of his participating in a synagogue worship service before embarking on his mission, the only indication that this non-practicing Jew might have a mustard seed amount of faith. He seemed to love Estella at first but did not reunite with her after the war. If the scriptwriters got it right, he did engage in sex with men as well. He is the kind of man who is difficult to describe, reminding me of the famous Heisenberg Uncertainty Principle, which states that we cannot know both the position and the velocity of a quanta. Moe is attempting to arrive at some degree of certainty when he quizzes the scientists about their German friend. Can he build an atom bomb? Would he build one? He has been instructed that even if there’s a 5% chance that Heisenberg is heading a nuclear bomb project, he should kill him, but his conscience keeps bothering him over the question of killing a human being who might or might not be helping the Nazis.

In Wikipedia’s article “Werner Heisenberg” there is just a short paragraph on Moe’s contact with Heisenberg, so we can be grateful for this feature-length treatment, simplified as it is (for example, the ballplayer made an earlier trip to Japan not depicted in the film. and his sad post-War behavior is left out of the postscript. See Wikipedia’s article on him, which includes Moe Berg’s baseball card—at the end of the article it is said that his is the only baseball card on display at the C.I. A. Headquarters.)

Although by no means without its faults, this film about a footnote to history is well worth your time.

This review with a set of discussion questions is in the July issue of Visual Parables.

The true story of how baseball catcher Moe Berg joined the O.S.S. after Pearl Harbor & was sent to Zurich where German physicist Werner Heisenberg was lecturing to kill him if he determined he was working on an atom bomb.
Editor Rating ★★★★★4 out of 5
More Details