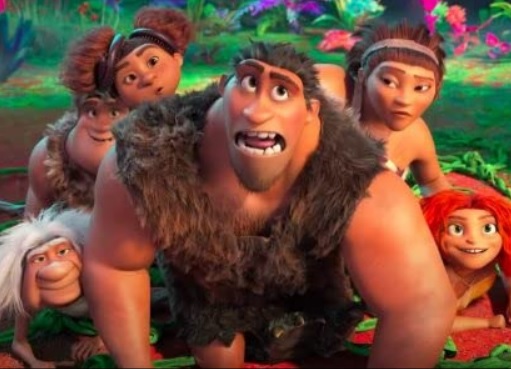 Director Joel Crawford’s film, the second in the series about a Stone Age family, is an amusing tale of culture clash and the need for solidarity. Just as I loved the first film almost seven years ago, The Croods, I recommend this one foo. It provides both escapist fare for the whole family and, like the first film, teaches some worthy life lessons.

At the beginning of the film the Croods are fleeing once more for their safety. The family consists of  Grug (voiced by Nicolas Cage)and Ugga Crood (Catherine Keener); their daughter Eep Emma Stone); Guy (Ryan Reynolds), who had introduced the family to fire in the first film and is sweet on Eep; Thunk (Clark Duke), Eep’s dim-witted brother; baby daughter Sandy (Kailey Crawford); and Gran (Cloris Leachman), Ugga’s feisty mother.

Grug encounters a large wall, and on the other side the family discover an Eden-like land. Lots of edible things on the trees and in the fields. Lots of beautiful flowers and fluttering butterflies. All this presided over by the Betterman family who live up to their name. They follow a settled life, in contrast to the nomadic existence of the newcomers. The parents Phil Betterman (Peter Dinklage) and Hope Batterman (Leslie Mann) and their daughter Dawn Betterman (Kelly Marie Tran) live a much more comfortable existence than the Croods. Instead of moving around in order to stay safe and find food as the Croods do, they live in one place, an elaborate tree house reachable by a primitive elevator. They cultivate the fields and orchards rather than hunt. This difference extends also to the table where Grug (Nicolas Cage) lives up (better, down) to his name, eating with his fingers, whereas the Betterman’s use utensils.

At first there is tension between the two heads of the families, the welcome wearing thin as differences are encountered and various intrigues break out. It is the two daughters, who become sister-like friends, and will…well you can find that out. The major crisis is over Grug’s eating the bananas Phil had forbidden him to touch and a conflict with a tribe of monkeys whose welfare depended on that fruit. How all this comes to a climax, ending in reconciliation and friendship is both exciting and satisfying.

Even if you have not seen the first film, you will enjoy this long-desired sequel. It has been a seven-year wait, but the wait is well worth while.

The once nomadic Crood family experience culture clash when they meet the more advanced Betterman family.
Editor Rating ★★★★★4 out of 5
More Details