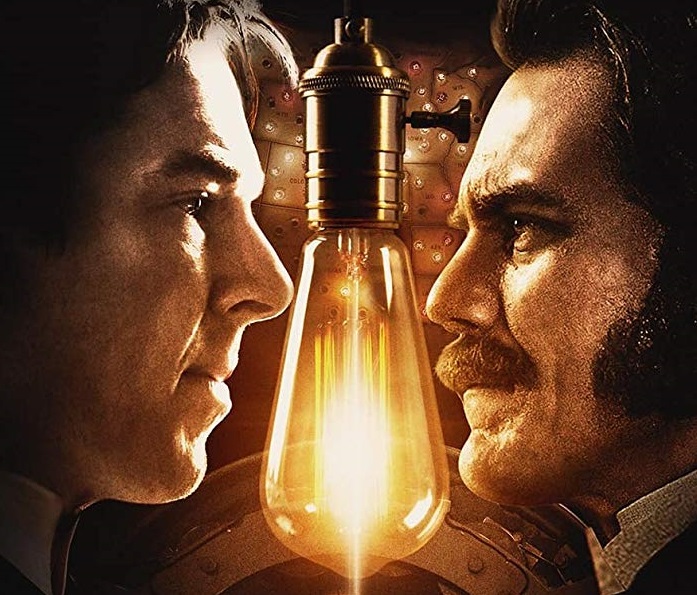 Then God said, “Let there be light”; and there was light. And God saw that the light was good…

Director Alfonso Gomez-Rejon’s historical film about the beginnings of the harnessing of electricity was set for release in 2017, but the sexual abuse controversy centering on distributor Harvey Weinstein derailed the plans. Now at last it is out by a new distributor, and we can see that it is couched in terms of an epic struggle between two titans, the inventor Thomas Edison (Benedict Cumberbatch) and business man (and also inventor—of railroad brakes that saved thousands of lives) George Westinghouse (Michael Shannon) as to what form of electricity delivery system will prevail.

The film is always fascinating, but also confusing at times, the latter because it is very episodic, and for this hard-of-hearing reviewer, has a soundtrack that often was unclear. Edison prefers DC (direct current), and Westinghouse backs AC (alternating current). Both have their merits. DC is safer, but AC is cheaper and can be transmitted much farther, thus requiring fewer transmitting stations. Westinghouse sees that DC works well in a city with its congested population, but out in the country it would be too expensive for most people. He tries to set up a dinner meeting to see if they can work together, but Edison turns him down, his train speeding on by the station platform where Westinghouse intended to meet him.

Actually, the film opens on a night in 1880 with Edison presiding over an impressive array of his newly developed light bulbs and moves through the decades to their contest over who will win the contract to light up the majestic buildings of the 1893 Columbian World’s Exposition, to be held in Chicago. In between there are personal tragedies, each losing his wife, the release of Edison’s phonograph, and the entrance into the story of another genius, the Serbian-American Nikola Tesla (Nicholas Hoult), who works for Edison for a while, and then moves over to Westinghouse.

The Edison depicted in this film is not the scamp of Mickey Rooney’s Young Tom Edison nor the saintly inventor of Spencer Tracey’s Edison the Man, both films released in 1940 when a Hollywood film biography amounted to hagiography. This Edison is as much the grasping capitalist as brave, creative inventor, a vain man willing to use ruthless methods to get what he wants—money and credit for his inventions. He secretly backs an invention that he had turned down, the electric chair, in the hope that its use of AC current will discredit his rival. On the other hand, he is shown as a caring father who enjoys exchanging Morse Code by tapping out on spoons and dishes messages containing insults and jokes with his two sons. The nicknames of the boys— “Dot” and Dash.” (He had been a telegraph operator.)

There are many dramatic scenes and a chilling contrast when the screen is split into three parts: in the center is the first execution of a murderer in an electric chair, while on either side we see the spectacular lighting up of the World’s Fair. For me the high point is the sequence depicting the Chicago World’s Fair, some of the scenes set in the daytime when we can see in the distance George Washington Ferris’s partially built Ferris Wheel towering over the white buildings. I probably enjoyed this section so much because of my reading a few months ago Erik Larson’s book about the building and promotion of Chicago’s Columbian World Exposition, The Devil in the White City: Murder, Magic, and Madness at the Fair That Changed America.

In addition to the excellent special effects that produced the magnificent white Exposition buildings is the beautiful cinematographer of Chung Chung-hoon, always creating the right mood, such as the opening scene in which Edison is in a dark field in Menlo Park where he lights a series of bulbs to demonstrate his invention to potential investors is so striking that we know right away we will be watching a lovingly made film. Although its title tells us its subject is electricity, its maker has a far larger interest, as he says in a Hollywood Reporter interview, “Yes, it’s about electricity but it’s really about ego versus humility and ambition and legacy and that was incredibly important to me.” According to the Creation Myth it took but a word for God to create light. In this film we see that it took a lot of effort and scheming for men to light our cities, making for a very interesting story. If you like history and biography, this is a film for you.