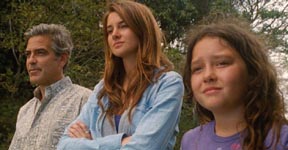 Matt and his daughters gaze at their fasmily’s land.
© 2011 Fox Searchlight

Then Peter came and said to him, “Lord, if another member of the church sins against me, how often should I forgive? As many as seven times?” Jesus said to him, “Not seven times, but, I tell you, seventy-seven times.
Matthew 18:21

The earth is the Lord’s and all that is in it,
the world, and those who live in it;
for he has founded it on the seas,
and established it on the rivers.
Psalm 24:1-2

George Clooney’s Matt King, a real estate lawyer on the Hawaiian island of Oahu, has his hands full dealing with serious problems. His wife Elizabeth (Patricia Hastie) lies in a comatose state in a hospital as a result of a boating accident; he has become estranged from his teen-aged daughter Alexandra (Shailene Woodley) and her younger sister Scottie (Amara Miller); he is being pressed by his large clan to agree to sell the family inheritance, a beautiful track of land on the island of Kauai that resort developers want to build on—and he learns from Alexander that his wife had been cheating on him. The latter is ironic in that Matt begins the film’s narration by acknowledging that he must talk with his wife because the two have drifted apart because of his absorption in business affairs.

Director Alexander Payne’s film is one of the best of the year with its themes of family, land heritage, forgiveness and reconciliation. Adapted from the novel by Kaui Hart Hemmings, the story is a complex one with a wonderful ensemble cast that match Mr. Clooney’s artistry—I will be very surprised if he is not nominated for a “Best Actor” Oscar. The characters are well rounded, even Alexandra’s somewhat goofy boyfriend who seems as devoid of brains as the Oz’s Tin Man comes through for Matt toward the end of the story. George himself is a descendant of a Hawaiian princess and an early white settler. Although he lives a low key middle class as a businessman, the multitude of cousins seem to be mostly slackers eagerly awaiting their portion of the proceeds from selling the ancestral land.

After the doctor tells Matt that Elizabeth’s coma is irreversible, Matt keeps the information to himself for a while. He gathers up the girls and boyfriend and flies to Kaui where he has learned that Elizabeth’s lover is vacationing with his family. He is Brian Speer (Matthew Lillard), a real estate agent. Before searching for the lover, the family drives out to see the tract of land that belongs to the larger family. It is indeed pristine, with an unspoiled beach and extensive grove of trees.

Matt and companions scour the beaches for Brian, but have no success, until Matt casually talks with a mother carefully watching her two little children play in the surf.  She turns out to be Julie Speer (Judy Greer), who is staying with her husband at a nearby beach cottage owned by one of George’s many relatives. At last Matt has found the man who had stolen the affections of his dying wife.

The confrontation with Brian later that night at his cottage turns out to be very different from what is expected. Indeed the scene is the second best moment of grace in the film. An equally fine moment of grace unfolds in the hospital where his father-in-law and family have come to say goodbye to Elizabeth before the medical staff, in compliance with Elizabeth’s stated wishes, pull the plug on her life support system. When the father-in-law lashes out at Matt, declaring that such a faithful wife as Elizabeth deserved a better husband, Matt shows tremendous restraint. Later Julie’s visit to the hospital room also is a moment of high drama.

George Clooney’s performance is Oscar worthy, but we must also mention that of Shailene Woodley as Alexandra. This young TV actress appears here in her first movie role, and we can only hope that other filmmakers will use her. She is resentful of her father’s lack of attention to her and her sister, and is almost contemptuous of his ignorance of her mother’s infidelity. At the private boarding school she attends she has retreated into the role of rebel without a cause. She is uncertain of her place in the world and only gradually warms up to her father. Ms. Woodley holds her own in every scene played with the experienced Clooney.

The gradual rapprochement of Matt and his daughters; his wrestling with his emotions upon learning of his wife’s infidelity; his finally arriving at a decision concerning what to do with the land—all this makes for compelling viewing. Although set in the present, Matt feels the hand of the past upon him in regard to the land, reminding me somewhat of the theme of people and land in the Hebrew scriptures. Given the lofty and inspiring ancestors, the film raises the question we should all be considering, “Is my present life a worthy one and is it honoring those who came before me?  This is a film to cherish and return to more than once. Watch next year for it to be included among the ten nominations for the “Best Picture” Oscar.