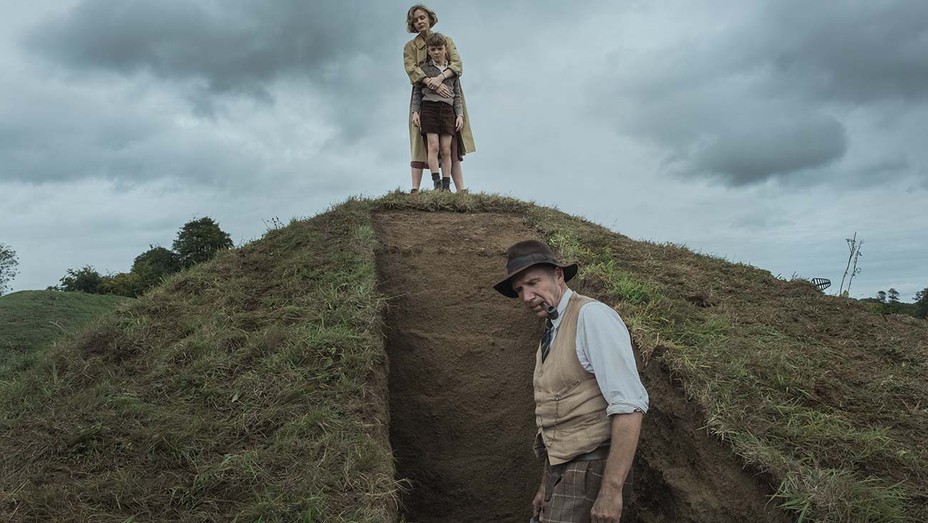 Director Simon Stone and writer Moira Buffini’s adaptation of John Preston’s fact-based novel deals with classism as well as archaeological excavation, friendship, and romance. Beautifully photographed, it could serve well as family entertainment in that one of the characters is a winsome boy eager to explore the world and who finds a substitute father in the main male character.

Edith Pretty (Carey Mulligan) and her wealthy husband had bought the Suffolk estate, Sutton Hoo in the hope of exploring its mounds under which they believed might lie buried archaeological finds. However, the husband had died shortly thereafter, leaving Edith and her young son Robert (Archie Barnes) grieving, but still determined to excavate the mounds.

Our story begins with Edith offering the job to Basil Brown (Ralph Fiennes), an employee of the local Ipswich museum currently working on excavating a Roman villa. Son of a farmer, but third generation of self-taught men skilled in digging up ancient remains, Basil is well aware of his humble status, calling himself an excavator rather than an archaeologist. But he is well aware of his skills and worth, so at first he turns down Edith’s low-ball offer of a salary. She quickly ups the offer, and Basil accepts.

Robert is glad about the new hire because Basil had shown genuine interest in him upon their first meeting. He is more than tolerant in regard to the boy hanging around the dig. Robert loves science fiction and often wears a homemade space helmet as he dashes about on exciting missions. We see him once with a copy of a magazine I also loved as a boy, the American pulp Amazing Stories with its colorful cover and array of exciting stories set in outer space. He builds models of spaceships and is thrilled when Basil reveals that he has a telescope and will set it up in the near future.

The heads of the Ipswich Museum (Paul Ready, Peter McDonald) are not pleased that Basil has agreed to go to work for Edith. They downplay Basil’s credentials as well as Edith’s insistence that she, not they, has the authority over what the dig might find. This will be a continuing struggle, with the two professionals calling in a poohbah from the prestigious British Museum, thus emphasizing the theme of classism—how dare a man who has never been to a university take charge of such a dig.

And such a dig it turns out to be! After a false start that ignores Edith’s hunch about which mound to dig, Basil restarts his digging the trench into the mound of Edith’s first choice. He is thrilled to discover that the fragile remains of a ship are lying beneath the soil. It is not a Viking ship, but an older one, a large 6th century Anglo-Saxon ship.

News of this extraordinary find brings British Museum archaeologist  Charles Phillips (Ken Stott) to the site. With it now given an official designation as historic, he takes charge, keeping Basil on when he grudgingly admits to the quality of the work done thus far. With him are the newly married couple Stuart (Ben Chaplin) and Peggy Piggott (Lily James). Both are archaeologists, but it becomes obvious that Phillips favors the husband, agreeing to Peggy’s working at the site because of her light weight will do less damage to it. Fittingly, it will be she who discovers a trinket that leads to the discovery of a treasure trove, proving what Basil had thought—the ship was hauled up from the sea to serve as the burial chamber for possibly a king.

During the first part of the film we might believe that a romance will develop between Edith and Basil, despite the difference in their ages. Basil lodges in the small shack that has been set up next to the dig, and in a pair of shots we see the two alone in their bed at night, each coiled embryo like. His warm relationship with young Robert might well extend to the mother. This is dispelled when we at last learn that Basil has a wife, May (Monica Dolan), devoted to her husband and his work. She is sure of their bond and shows no anxiety about her husband being tempted. We see that the bond between Edith is an intellectual one that in no way is a threat to the loving relationship between May and her spouse.

There is a romantic subplot, but it is an illicit on between Peggy, so grossly neglected by Stuart, and Edith’s cousin Rory (Johnny Flynn), who volunteers for the dig. The country is on the cusp of war with Germany, and so Rory has enlisted with the RAF. Will he and the frustrated Peggy succumb to temptation?

As news of the sensational find spreads, revealing that the Anglo-Saxon period was more advanced than previously thought, the local officials have to give in to the demand that the British Museum will become the custodian of the treasure. Edith agrees on the condition that Basil be given credit for beginning the dig. But he,  savvy to the classism of Charles Phillips and the archaeological establishment tells her, “ Mark my words May. I won’t receive any credit. I won’t even be a footnote.”

The crew reluctantly revert to recovering the ship remains due to the coming war and its diverting of all resources to the war effort. The film closes with the voice of Prime Minister Neville Chamberlain reporting the failure of his peace efforts and the refusal of the Germans to withdraw from Poland by the deadline he had sought. The sad tone of this speech is continued in the film’s end notes that report that when the site was opened again after the war and the treasures placed on display at the British Museum, there was indeed no mention of Basil Brown. A following note reveals that this is being corrected.

In the UK right before WW 2 a widow hires a commoner to excavate a mound on her estate, much to the dismay of museum professionals.
Editor Rating ★★★★★4.5 out of 5
More Details