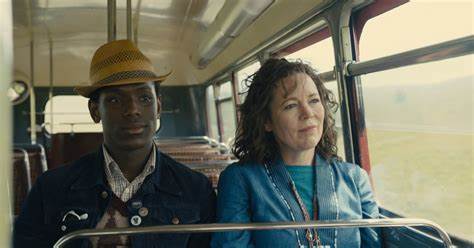 The human spirit will endure sickness,
but a broken spirit—who can bear?


Even in laughter the heart is sad,
and the end of joy is grief.

Oscar-winning director Sam Mendes (American Beauty) pays homage to the cinemas of the 80s while tackling such issues as racism and mental illness in his new film. Set in the early 1980s when racism in England, under the conservative rule of Margaret Thatcher, led to the Brixton riots, the story centers on two employees at a large movie theater named The Empire where, as its projectionist observes, the light we see in a movie makes us not see the darkness, suggesting the illusory nature of movies.

The Empire is located in Margate, on England’s southern coast right on the boardwalk facing the sea. Hilary (Olivia Coleman) is the middle aged duty manager who lives alone and has no friends other than the staff at the theater. She visits a doctor regularly who prescribes her lithium, apparently to deal with her schizophrenia. She regularly submits to the sexual predations of the theater’s manager Mr. Ellis (Colin Firth). When the new hire, the Black Stephen (Michael Ward) is introduced to the staff as the new assistant ticket taker, the two strike up a friendship that blossoms into an Autumn-Spring romance, one that both relish even though they know it cannot endure for long amidst society’s vicious racism.

The love between the two unlikely lovers, so beautifully photographed in a rooftop scene in which they watch a fireworks display, stands in stark contrast to ugly scenes of racism. One consists of a regular customer insulting Stephen as Hilary and customers standing behind the racist watch. Stephen has told the man he cannot take his fish and chips inside—house rules dictate that only theater-bought food is allowed—and the man argues, his eyes filled with hate. He deliberately stands there, finishing his chips, even though he is holding up the line. After several long minutes, he finishes his snack, and Stephen, without responding to his nasty words, takes the ticket, and the man enters.

In two other scenes, we se that racism can be as dangerous in the UK as in any of the Southern states of the USA. Hilary is following Stephen on a street when a small group of skinheads accost him, telling him to go back to where he came from. Violence is prevented by two Bobbies walking toward the group. But later, Stephen does not escape a beating. As in Brixton, racists in Margate riot, streaming past the theater while the staff looks on in horror. The skinheads spot Stephen and start banging on, then breaking the glass in the doors and pouring inside. They surround and beat the young Black man to the ground. Later, Hilary will visit him in the hospital. Hilary herself suffers a breakdown, the details of which I leave for you to discover.

The faded but still magnificent art deco Empire Theater also serves as a character. Its lobby, grand staircases and gorgeously curtained two remaining screens are still beautiful to behold. But, as we see when Hilary conducts Stephen on a tour of the building, two other screens and a spacious ballroom and dining area have been allowed to fall into ruin, victims no doubt of television that killed off so many beautiful treasures of movie palaces in America as well. The building might be regarded as symbolic of Hilary herself. By the end of the film she will also still be carrying on, but bruised and battered, and maybe also strengthened, by what has transpired.

I will place this engrossing film alongside the other film about a movie theater that I cherish, Cinema Paradiso. Oddly enough, Hilary’s retreat into isolation has apparently stood in the way of her enjoying what her job is dedicated to, the movies. She has never seen one at the theater, so her request of projectionist Norman (Toby Jones) to shower one, any film will do, is a key to her progress of recovery. Surprisingly it is Hal Ashby’s Being There, in which Peter Sellers plays a simple minded whom the rich and powerful mistakenly believe is wise and sophisticated. The scene we see is when the simpleton walks away on the surface of a pond, much as Christ did on the Sea of Galilee. Her smile, her sense of enchantment leaves us with the hope that she will at last begin to thrive and not just exist.

Mentally disturbed Hilary & the younger Black Stephen who work at a British movie palace have a brief affair amidst the racism of the 1980s.
Editor Rating ★★★★★4 out of 5
More Details