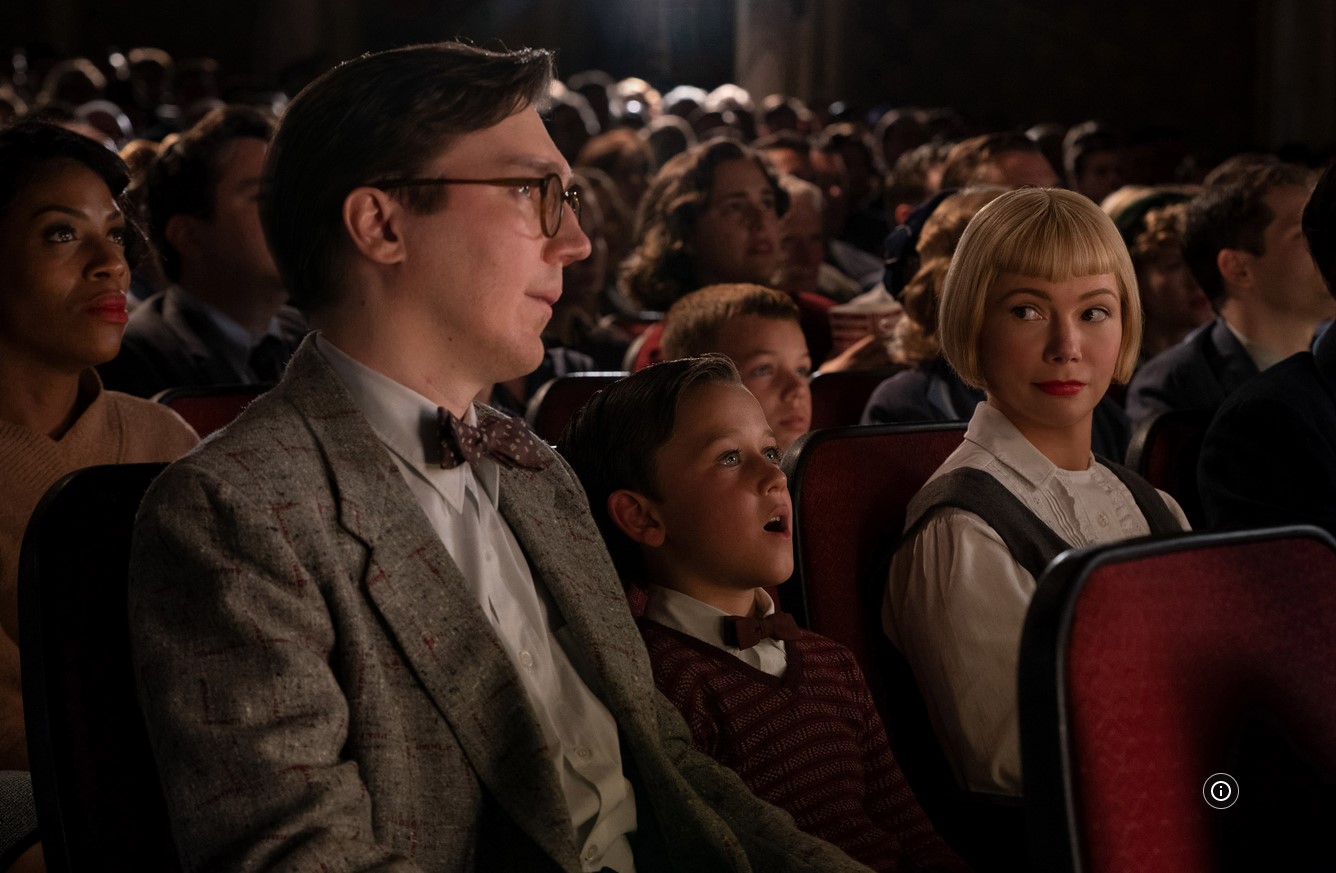 “Honor your father and your mother, so that your days may be long in the land that the Lord your God is giving you.”


“But blessed are your eyes, for they see, and your ears, for they hear.

Although Steven Spielberg has often referenced his family experience in such movies as E.T. and Close Encounters, his new film is the first which centers upon it. The names are changed, but the Fablemans give us a movie version of what his coming of age in his own family was like. As we see, it was a mixed procedure, captured by the term “dramedy.” The Fableman/Spielberg family is a combination of dreamers and realists, of eccentrics and down-to-earth folk, who love each other but also find themselves at odds with one another.

The film begins on an evening in 1952 when Burt and Mitzi Fabelman (Paul Dano and Michelle Williams) are outside a New Jersey movie theater coaxing their fearful six-year-old son Sammy (Mateo Zoryna Francis-Deford) to go inside. His father is an engineer working on the development of computers, so he explains that a movie is an illusion based on the persistence of vision of the human eye that blurs together a series of still pictures, whereas his mother says, “Movies are like dreams that you’ll never forget.” This difference between the two approaches to life, the scientific and the artistic, will run throughout the story, pulling the boy in opposite directions. The movie theater is showing Cecil B. DeMille’s The Greatest Show on Earth, and the train wreck scene traumatizes the boy so that on the way home he is silent.

After a nightmare inspired by the movie, he declares that he knows now what he wants for Hannukah (like many a Jewish boy surrounded by Christian neighbors he is confused and envious of Christian neighbors during the Christmas season). Sure enough, come the big day, and while his sisters are opening their girlish gifts, the boy is unwrapping the cars and then the engine of a Lionel electric train.

One of his grandmothers is worried that he will electrocute himself, but as he switches on the transformer and turns up the speed control, the train starts up with no harm to the boy. However, the parents do become upset later when Sammy restages the movie’s train-wreck by placing a toy car and his small Noah’s ark on the tracks and rams the train into them at full speed. Car and ark are knocked over, the ark’s animals scattered about, the engine jumping the tracks, and the train cars following it. Burt is especially displeased because of the cost of the train set as he sets out to repair a couple of the damaged cars.

It is Mitzi who suggests to their son that he borrow his dad’s 8mm movie camera to film the crash, so that he can watch the crash over and over without further damaging the set. She also explains that his obsession with the crash might be his way of controlling matters in a fearful situation. Soon Sammy is filming  his sisters Reggie, Natalie, and Lisa in junior-sized Westerns, much to the amusement of the family.

As the years go by, Burt obtains a job and moves the family to Phoenix. Arizona. Of peculiar interest is that Burt’s best friend Bennie (Seth Rogen) has been like a boarder in New Jersey, frequently dining with the extended family that includes the grandparents. When Burt informs Mitzi that they are moving to Arizona, she badgers him to find a position for Bennie as well, which he does.

Sammy—or rather, “Sam,” as he now prefers to be called—joins the Boy Scouts has found that the movie camera is his preferred form of expressing himself. Now played by Gabriel LaBelle, Sam  films his fellow Scouts and earns a merit badge in photography. One of his productions is a WW 2 adventure film with his fellow Scouts costumed in war surplus helmets and uniforms. Sam had been dissatisfied that his previous action films looked “fake” because nothing is coming out of the gun muzzles. When his mother, once an aspiring concert pianist, gets upset while playing a classical piece and stomps over the scattered pages of her music score that she has thrown up in the air, Sam picks up from the floor one of the pages through which Mitzi’s high heel has punched a hole. This inspires him to discover the solution to making his gunfights more realistic looking. The audience of family and Scouts is delighted when flashes issue forth from the gun barrels. Asked how he did it, the teenager explains that during the editing of the film he punched tiny holes in the film at strategic points in each frame so that flashes of light would issue forth when the frames are projected.

The family, Bennie included, goes on a camping trip during which Sam films their activities. Shortly after this Mitzi’s mother dies, and Burt, who has bought an editor for Sam, suggests that he complete the camping trip film for the grieving Mitzi. Sam objects because it will interrupt his plans for one of his own movies, and Burt angrily says this is more important. The next morning Mitzi’s brother Boris (Judd Hirsch) shows up unexpectedly. His visit is not long, but its impact on Sam is long-lasting. Boris had worked in the circus as a lion tamer and in silent films, so he accepts his nephew as an aspiring artist. He reveals to the boy a little of Mitzi’s past, “She could have been that concert piano player. What’s she got in her heart is what you got.” There is a cost to being an artist, Boris warns, stating that “We are both junkies… Art will give you crowns in heaven and laurels on Earth, but also, it will tear your heart out. Art is no game! Art is dangerous as a lion’s mouth. It’ll bite your head off.” Although they love their families, artists love their art even more. (As I type his cautionary note I think of the film popular with art house devotees during the that period, The Red Shoes, in which a ballerina must choose between her art and a lover.)

Thus, fascinated with the making of films, Sam displays the devotion and ingenuity that would make him one of the most creative directors in Hollywood. His father Burt, however, keeps referring to his son’s filmmaking as a hobby. He cannot imagine that movie making could be a respectable vocation. It is Mitzi who keeps encouraging their son, the frustrated artist in her understanding his longing. She tells him, “You do what your heart says you have to. ‘Cause you don’t owe anyone your life. Not even me.” She comments at another time on their family, “In this family, it’s the scientists versus the artists. Sammy’s on my side; he takes after me.”

Sam does set out to edit the camping clips into a finished film, As he carefully looks at the frames he is shocked by the obvious attraction between his mother and Bennie. The pair are often in the background of a shot, but he notices their hand holding and expressions of tenderness on their faces when they are together—which is often. He leaves most of these out of the film that he shares with the family. Everyone is delighted by his show, but he grows cold toward his mother, and when she questions this, he takes her into his room and shows her the clips he has left out, all spliced together onto a reel. Michelle Williams, through her facial expressions when she realizes that Sam knows where her heart lies, demonstrates what a consummate actor she is. The eventual separation of the parents, with Sam staying with his father while his sisters go with Mitzi will have its effect on his future films. And the rest of the film, set in in California where Sam overcomes high school bullies by means of a film, demonstrates what a superb filmmaker Steven Spielberg has become. And also hoe film is a means for both filmmaker and audience to see reality.

It has often been observed that a film, like music, deals more with emotions than with the rational or intellectual, the latter best expressed through the written form. One could write a rational and enjoyable account explaining how a boy developed into a great director, but the written words, though stirring, would pale before the visual presentation. As we watch this film we thrill as the boy notes how his family and friends react so favorably to his films. We cry a bit during the scene when he confronts his mother, and we laugh a lot—especially during the scene when Sam falls for a devout Catholic girl who insists that he take Jesus into his heart and urges him to pray with her before the pair kiss.

The director pays fit tribute to his parents, Leah Adler and Arnold Spielberg, even to the father who at first did not understand or sympathize with his son’s artistic dreams. As an artist he looks back upon those who enriched his life, such as his Uncle Boris, and even Bennie who contributed to his mother’s leaving his father—there is a touching scene late in the film in which the interloper, materially and spiritually, encourages the boy’s filmmaking aspiration. The villains are minor factors, mainly the hulking antisemitic athletes at his high school who bully him, and even then their leader Logan comes to him confused and remorseful after Sam shows to the school the film he had made of the school outing at the beach that portrays him heroically. I loved the Gandhi-like way employed by the young filmmaker that leads, if not to friendship, at least a cessation of bullying!

No doubt Spielberg is greatly aided by his long time collaborator Tony Kushner, co-writer of the script, and of course the score by John Williams, another veteran of so many Spielberg films. The film, opening in selected theaters over the Thanksgiving weekend, is nowhere near a blockbuster success thus far, so let’s hope more people will discover its magic as additional theaters across the country pick it up. It is a family film not to be missed.

The fictionalized story of how his family & others influenced Steven Spielberg to become a great film director.
Editor Rating ★★★★★5 out of 5
More Details