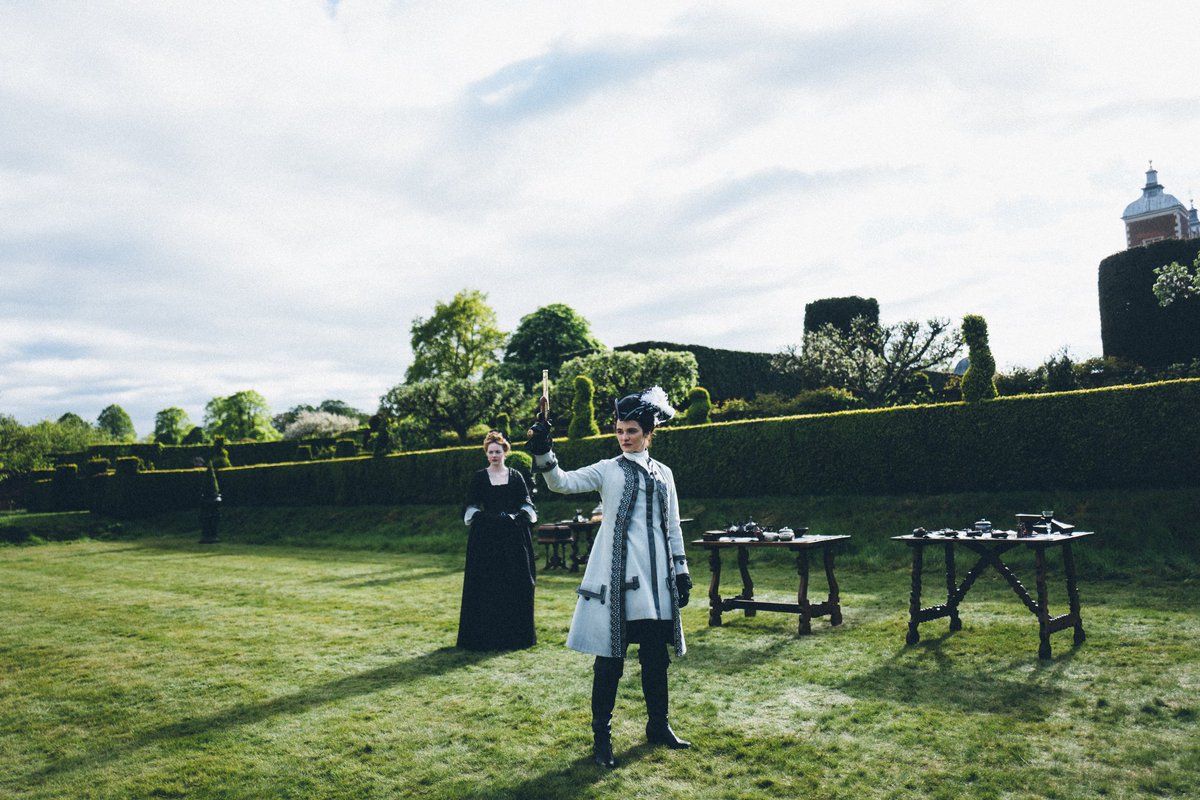 With patience a ruler may be persuaded, and a soft tongue can break bones.

If all you know about Great Britain’s Queen Anne (1665 –1714) is that there is a war bearing her name, this lavish costume drama could be your cup of tea. She did not come close to reigning as long as Queen Elizabeth I or impacting her times because she was plagued with bad health, as well as possessing a more limited intellect. And yet for 12 years she was at the peak of British royal power at a time when other women could neither vote nor talk about politics in mixed company. 2018 has been a good year for movies about strong females (see The Widows elsewhere in this issue), Greek director Yorgos Lanthimos bringing us one more with performances of the three lead actors so good that they have been nominated for Golden Globes.

Like most historical movies, I suspect that scriptwriters Deborah Davis and Tony McNamara have doctored the history a lot for “dramatic effects,” but from what I can find much of the film is factual. What a time it was a little over 300 years ago! The world had already seen women assume power—Queen Isabella in Spain, Queen Elizabeth in England, and Mary in Scotland. Now in the early 1700s it is Queen Anne, ably portrayed by Olivia Colman.  Married to Prince George of Denmark, she ascended the throne in 1702 when the childless King William died. Although she underwent seventeen pregnancies, none of her offspring surviving childhood. By the time we see the Queen in this film, she has lost her husband (in 1708) as well as her youthful figure and beauty. She is so painfully afflicted with gout and other ailments that much of the time she gets around the palace in a wheelchair and is carried to Parliament in a sedan chair.

She prefers her pet rabbits to dealing with men and affairs of state, the eternal squabbles between the Tory and Whig politicians darkening her days. Her childhood friend Sarah Churchill (Rachel Weisz), Duchess of Marlborough, serving as a lady of the bedchamber, is more than willing to take on most of Anne’s affairs of state, much of which pertain to the war with the French and the Spanish that has been dragging on for years. Strong-willed to the point of bullying, she is the only one who can talk frankly with Anne—or kiss and go to bed with her.

Sarah’s cousin, Abigail Hill (Emma Stone) arrives at the Queen’s estate via carriage in the hope of obtaining a position when her gambling-obsessed father bankrupts himself. She gets off to a bad start. One of the passengers shoves her, and she falls face-forward into the mud. Looking her over, the disapproving Sarah sends Abigail down to work and live among the lower servants. The ever-observant Abigail earns her promotion by stealing a horse and riding into a wood during one of Queen Anne’s flare-ups of her illness. She finds the herbs from which she makes a potion that lessens the Queen’s sufferings. Sarah, upset over discovering her with Anne, orders Abigail to be taken away and flogged, but the grateful Queen intervenes.

There follows an uneasy relationship between Sarah and Abigail, the former realizing her manipulative cousin might become a rival for the Queen’s affections. The key moment, a very poignant one at that, for Abigail’s climb to become the new favorite is when she is alone in the bed chamber with the Queen. She picks up and pets one of the monarch’s beloved rabbits. Anne, pleased by Abigail’s playing with the little creature, tells her there are seventeen, one for each of her children that had died.

The battle over the Queen’s affections develops swiftly, with Abigail supplanting Sarah in the Queen’s bed during a period when Sarah is away on state business. (The film takes the affirmative side in the controversy of historians as to whether Queen Anne was a lesbian.)

There is also a lot of intrigue among the women and the Parliamentarian politicians over ending or continuing the war with France and Spain, Robert Harley (Nicholas Hoult), wanting to end the conflict, and Sidney Godolphin (James Smith) arguing the opposite. Harley even tries to engage Abigail to spy on the Queen for him, but she refuses. There is also Abigail’s romance with Samuel Masham (Joe Alwyn), the handsome young man who earlier had spied her in the woods gathering the herbs for the relief of the Queen. However, this is very sketchily played out, this film far from being a romantic one. There is never a doubt that the Queen is more important to Abigail than her husband.

During the period when Sarah’s husband John (Mark Gatiss) is away at war the two rivals almost become friends. During a round of shooting Abigail asks Sarah, clad in a striking female version of a man’s military costume, about her worries over the safety of John. Sarah replies that his participation in the war is the best for the country. This may be as close as the women will get, their rivalry overcoming any possibility of friendship. Indeed, Abigail uses her knowledge of plants and potions to almost do in Sarah. (I couldn’t find any mention of this in my sources, but it certainly makes for a good story!)

From all the above we see that “the favorite” refers to both ladies, first Sarah, and then Abigail. In their struggle we see that women can be as ambitious and ruthless as men. Although they are probably not familiar with the moralisms of the Book of Proverbs, each of the women use their patience, as well as their wiles, to curry the favor of the Queen. None of the men, including government minister Robert Harley, is as adept as these two rivals in dealing with the Queen. Although this is an often wry study of powerful characters jockeying for power, it probably is not suited for a religious group to discuss, so I am not taking the time to come up with a set of questions for it.

Two rival ladies battle to be Queene Anne's favourite in this drama set in 18th century England.
Editor Rating ★★★★★4 out of 5
More Details