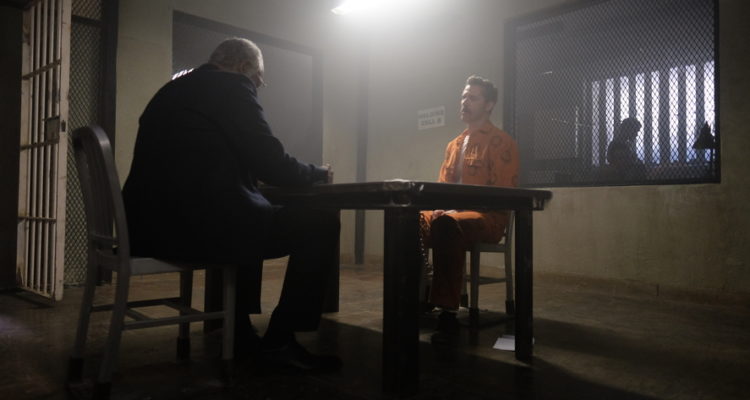 ...and forgive us our sins, just as we have forgiven those who have sinned against us.


“To forgive somebody is to say one way or another, "You have done something unspeakable, and by all rights I should call it quits between us. Both my pride and my principles demand no less. However, although I make no guarantees that I will be able to forget what you've done, and though we may both carry the scars for life, I refuse to let it stand between us. I still want you for my friend."

Roland Joffé and co-writer Michael Ashton take us to South Africa where they focus upon the work of Archbishop Desmond Tutu (Forest Whitaker), President of the Truth and Reconciliation Commission shortly after the demise of apartheid. The film is based on the latter’s play The Archbishop and The Antichrist, which is a fictionalized account on the Archbishop’s tug of minds with Piet Blomfeld (Eric Bana), a vicious, murdering ex-security agent imprisoned in a maximum security prison.

The film begins with a scene of a little white boy and a black girl playing happily together, even marking each other’s faces with painted tribal marks. Then the scene turns to night with headlights lighting up the darkness and an angry white man running up with a gun. He shoots the girl and her entire family. We surmise he is the white boy’s father and later will learn more about the incident. This disturbing scene will be repeated several times, it becoming apparent that this is an important part of Blomfeld’s past.

When Blomfeld seeks clemency by writing a letter to the Archbishop, the prison officials assure him the busy man will not answer. But they do not know that the intelligent man has laced his missive with quotes from Plato and John Milton’s “Paradise Lost,” counting on this to arouse Tutu’s curiosity. It does, and despite warnings from staff, the Archbishop decides to visit the prisoner.

Tutu’s wife Leah (Pamela Nomvete) is worried about his fragile health, but he brushes aside her objections to his heading up the TRC. He tells her that he cannot say No to President Mandela to serve their country. At Cape Town’s Pollsmoor Maximum Security Prison it quickly becomes apparent that Blomfeld has no interest in repenting his crimes, and certainly no remorse for his numerous victims. He expresses his contempt for the Archbishop and his view of a loving God in no uncertain terms. The prisoner seems intent on playing a game, the goal of which is to ridicule and undermine the faith of his famous visitor. As we see in a heart-felt conversation with Leah following several encounters with Blomfeld, the cynical antagonist almost succeeds.

Archbishop Tutu also feels he has a commission from a grieving mother Mrs. Morobe (Thandi Makhubele) who has come to him seeking justice for her daughter’s disappearance some years earlier. If you can just find one of her bones so that she can give her a proper burial, she pleads, she will be satisfied.

An old photograph of a young Black girl is part of the puzzle to understanding Blomfeld, as well as a series of incidents within the prison. The latter includes a plot by guard Francois Schmidt (Jeff Glum) to kill Blomfeld because the latter once was a member of Blomfeld’s assassination team. He is worried that if the prisoner confesses, he also will be exposed and imprisoned. This plot involves a dangerous prison gang called 88 and a young prisoner, but is too complicated to go into here. The result of the plot results in an explosive conclusion and a partial vindication of the Archbishop’s belief that no man is beyond redemption.

But perhaps the most dramatic moment in a film filled with powerful scenes involves neither the Archbishop nor Blomfeld directly. rather, it is when a security guard breaks down on the stand and confesses to have been a part of the squad that murdered Mrs. Morobe’s daughter. Her face streaked with tears, Mrs. Morobe approaches the defendant and spews out her rage and sorrow to the man—so powerfully that we expect her to attack him with her fists. However, after this emotional eruption, she quietly says, “I forgive you.” No cheap grace here!

Many critics have played down the film as being too obvious, even heavy handed. I found most of it deeply moving, with the cast excellently portraying people caught up in the turmoil of a time when one’s skin color determined one’s worth and status in society. Although the principal actors, Forest Whitaker, Erik Bana, and Thandi Makhubele have garnered the most praise, I also appreciated Pamela Nomvete in the underwritten role of the Archbishop’s wife Leah. Their conversations during which she fondly refers to him as “old goat” suggest a congenial marriage, one in which, as we see when the frustrated prelate almost gives up on Blomfeld, she provides the kind of sympathetic support every person needs from a spouse. The scene of the two at the seashore provides a welcome note of domesticate tenderness and tranquility in contrast to the many other brutal and tumultuous events.

The film is rated R for violence and the street language of Blomfeld and his fellow prisoners, but it still could be used by church groups wanting to explore the amazing end of apartheid that could shed light on our own situation in the United States. The film reveals that the TRC was not universally accepted by South Africans, so that without the strong leadership of its members, the experiment might have failed. It also demonstrates the power of faith that even the most hateful of persons can change, as well as that forgiveness can be healing for both the wrongdoer and the victim. One more of a treasure to be found in Netflix.

This review will be in the December issue of  VP along with a set of 6 questions for reflection and/or discussion. If you have found reviews on this site helpful, please consider purchasing a subscription or individual issue in The Store.

Archbishop Tutu as head of S.A.'s Truth & Reconciliation Commission engages in a tug of wills with a racist murderer while also seeking to discover the fate of a disappeared teenager.
Editor Rating ★★★★★5 out of 5
More Details